Kid Icarus: Uprising review: On the wings of love

Share All sharing options for: Kid Icarus: Uprising review: On the wings of love

Kid Icarus: Uprising effectively achieves a task that, in all my years of playing video games, I didn't know could be executed: It manages to make something from nothing.

You may hold a soft spot in your heart for the NES original. I encourage you to go back and play it. Consider its lack of character depth and its unbelievably punishing difficulty levels. Then envision how you'd develop a sequel 26 years and five gaming console generations later.

The developer, Project Sora, has picked through the bones of the experience that the original game presented, and fortified every concept with a level of thoughtfulness and charm that few other developers are able to wield. If Kid Icarus was a rough draft, then Uprising is an inspired revision.

Kid Icarus: Uprising doesn't waste any time on briefing players on what happened in its ancient predecessor. Instead, Uprising throws angelic protagonist Pit into the middle of a struggle between Heaven, Earth, the Underworld and a few other enemy forces revealed later. Pit is supported by Palutena, the Goddess of Light, with whom he shares some of the most entertaining banter this side of Prince of Persia.

In fact, each of the game's fully-voiced characters is hilariously written, often times breaking the fourth wall (Pit frequently refers to his battles as "levels") or referencing other Nintendo franchises, from Metroid to Brain Age. The efforts of the localization team, alongside SNL and Onion writer Mike Drucker, are present in every line of dialogue spoken in Uprising, including (but not limited to) Pit's meme-worthy excuse for not obeying the five-second rule for found food: "Floor ice cream gives me health!"

Almost every level is comprised of a five-minute on-rails shoot-em-up segment, followed by a longer, free-roaming ground battle and boss fight. The former constitutes the most exciting shmup I've ever played, with light speed chases through hazardous, gorgeous environments. Each sequence has climactic peaks which crescendo with the game's fully orchestrated, interactive score. Even if you're not a fan of the genre, these payoffs are exhilarating. 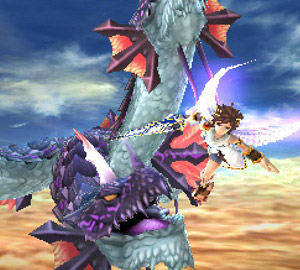 On the ground, things get a bit trickier thanks to Kid Icarus: Uprising's biggest achilles heel. The control scheme takes a lot of getting used to: players move Pit with the left stick, shoot with the left trigger, and aim with the stylus, similar to the controls forMetroid Prime Hunters on DS. In the sky, those three functions are easy enough to manage; but on the ground, where you're tasked with turning and maneuvering in 3D space, it becomes more of a chore.

Kid Icarus: Uprising includes a stand to support the system's weight, but after a few hours of acquainting myself with the controls and fiddling with (surprisingly hard-to-find) aim sensitivity and momentum options, I was able to play without it comfortably. Your first few missions are going to feel dishearteningly unintuitive, but eventually, you should be able to find your groove.

EVEN IF YOU'RE NOT A FAN OF THE GENRE, THESE PAYOFFS ARE EXHILARATING

Even if you find the controls hard to master, you'll never feel overwhelmed thanks to Uprising's ingenious take on difficulty settings. By default, each level is fairly easy; however, before you begin each mission, you're able to bet Hearts (the game's all-important currency) to increase the "Intensity" of the monsters therein. If you die, you lose some of those Hearts, and the Intensity decreases - but if you can manage to finish, you'll be rewarded with an exponential return on your bet, as well as rarer and more valuable treasures.

That's just one way Kid Icarus: Uprising lets you tailor it to your own playstyle. Pit can wield eight different subcategories of weapons (such as swords, clubs and cannons), each of which has a distinct feel that merits experimentation. Weapons can be found in levels, traded with StreetPass, and purchased or fused together, a process which builds an entirely new weapon that adopts the strengths and randomized special attributes of its components. I was surprised to find a deep and rewarding system that kept me diving back into levels I'd already completed, hunting for new armaments to slot into my homemade WMD.

Speaking of surprises: Kid Icarus: Uprising'smultiplayer component is fantastic. Each players' weapons and expendable power-ups are persistent between the multiplayer and single-player portions of the game. Players earn Hearts based on their performance, which can, in turn, be spent on even greater weapons. The urge for mechanical improvement here is just relentless.

The six-person Free-for-All mode is enjoyable enough, but the real delight is Light vs. Dark mode, in which teams of three players duke it out to deplete the other team's shared HP bar. The stronger your weapon is, the more HP your team loses when you get knocked out. When the bar reaches zero, one player respawns as Pit - and when your team's Pit dies, it's game over.

Matches are short and frantic, with a great deal of strategy for such a simple gameplay concept. When both teams' Pits are out, all three players tend to roam in packs, picking up weapons and healing items before crashing back together in a climactic melee. Even if you lose, you earn Hearts, and have a chance to win a randomly distributed weapon or power-up to further improve your loadout for next time.

And there have been so many next times. I cannot stop diving back into Kid Icarus: Uprising's levels, pushing the intensity to irresponsible extremes to bolster my haul. It's partially because of my own need to attain statistical perfection in games that allow me to do so. More than that, though, it's because I'm in love with what's become of the Kid Icarus franchise. I'm infatuated with how these characters, these brilliant mechanics, were molded from crude, 8-bit blueprints that are older than myself. And now, I want more.

Our review of Kid Icarus: Uprising 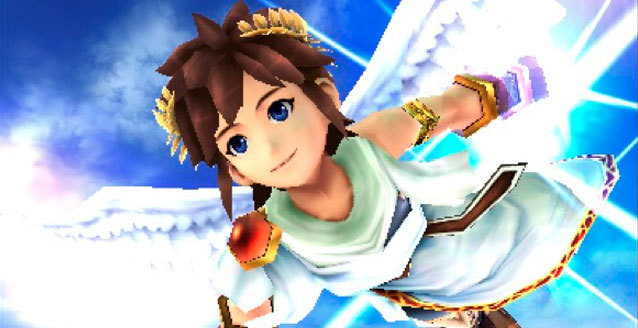