3D comes to the series with Kingdom Hearts 3D: Dream Drop Distance, but most of the fun got lost along the way.

Kingdom Hearts 3D: Dream Drop Distance might as well describe the ten-year chasm separating it and the original Kingdom Hearts. Somewhere across the span of seven games on four different platforms, the spark that made the Kingdom Hearts franchise initially appealing has fizzled. Square Enix is still following the campy formula of hopping between Disney-themed worlds, but thanks to a glut of mismatched new mechanics and pacing issues, Kingdom Hearts 3D stumbles enough to stir frustration and not much else.

Kingdom Hearts 3D follows the events of last year's Kingdom Hearts re: Coded for the DS. Series protagonists Sora and Riku must undergo the Mark of Mastery test - a physical examination that, if passed, will earn them the title of Keyblade Masters. They advenure to worlds based on movies such as The Hunchback of Notre Dame and Tron Legacy, with both protagonists working through their own unique storyline in each area. 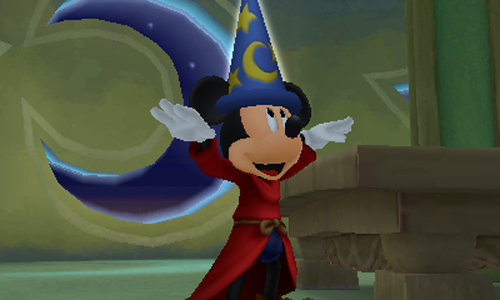 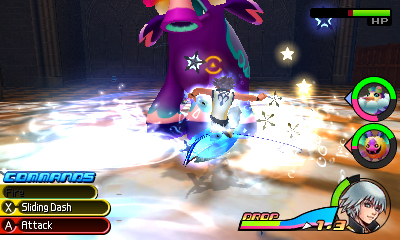 Combat uses the Deck system from Birth by Sleep. The recovery time between each attack flustered me at first, but things are more manageable once you earn more Decks. The new "Flowmotion" mechanic lets Sora and Riku slide and grind on railings, bounce off walls, and swing around poles. With Flowmotion, combat is fast, exciting, and effective - flinging Sora at an opponent then moving straight into a Deck attack feels great and deals serious damage.

Even looking past the lack of emotional connection, Dream Eaters just aren't as useful as Donald and Goofy. Dream Eaters chip away at enemies in combat, doing negligible amounts of damage until they hit higher levels. They function better with items or healing, but even then they're undependable - sometimes they'll fail to act even as your health bar flashes, warning of your impending death. 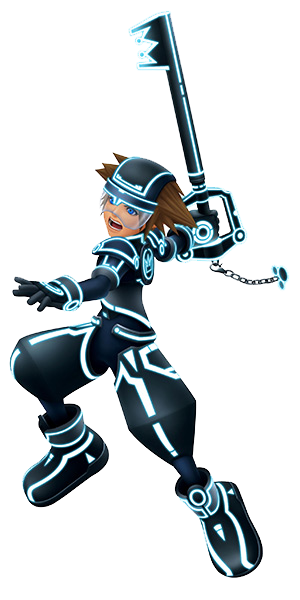 Sora and Riku are expected to team up with Dream Eaters to attack in tandem by filling up the Spirits' Link Gauge. Sora can ride his Dream Eaters, while Riku absorbs their powers to perform powerful combos. The later is much more effective, leaving Riku overpowered. Add in Riku's flashy attack animations and more developed character arc, and playing as Sora is boring by comparison.

The titular Drop system ensures you'll be spending plenty of time with Sora anyway. The Drop gauge will fill up over time - once it's full, a countdown begins. When the countdown finishes, your selected character falls asleep, and you're thrown back into the storyline of the other character.

While this keeps you from neglecting one of the storylines, Dropping often has awful timing. The Drop gauge's trilling beep may be a death knell if you're caught in the middle of a boss battle without any Drop-Me-Nots, which add time to the clock. Players can Drop manually if they choose, which is nice if you're stuck at a point in one storyline, but it doesn't get rid of the annoyance from being randomly shuffled between the stories. 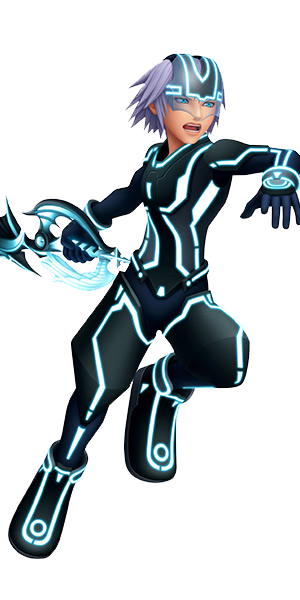 The Drop system's urgency raises the stakes but not the fun - if you're out of Drop-Me-Nots, you're in serious trouble. I found myself in boss battles without these items three times, and all three times I had whittled the boss's health bars down when the Drop Gauge went off and there was no way for me to stop it. These unexpected Drops forced me to restart nearly-finished battles - an infuriating loss of progress.

The Drop system is bothersome, but Kingdom Hearts fans have put up with clunky mechanics before in order to experience that magical mix of Final Fantasy and Disney. But one of those elements is missing in action this time around. The original Kingdom Hearts included a wide swath of Disney's most beloved characters and worlds - from the Duck Tales triplets to The Little Mermaid's Atlantica -- coupled with some of Final Fantasy's most popular characters like Squall and Aerith. 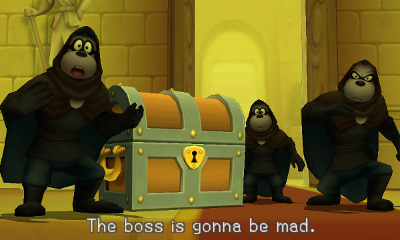 While Disney's influence remains strong, Final Fantasy has fallen by the wayside. There's not a Tetsuya Nomura creation to be found, aside from characters from The World Ends With You. Classic Final Fantasy characters are referenced as names of high-level Dream Eaters, a teasing reminder of the reason I originally fell for this franchise.

Even the Disney portions of the game aren't getting the star treatment. Each individual world's plot is painfully rushed. The reasonable pacing of previous games is dumped in favor of blasting through two-hour movies in fifteen minutes in an effort to focus on the series' overall struggle between darkness and light. While it's wonderful see thematic consistency, part of the charm of earlier Kingdom Hearts games lay in its treatment of Disney's material. Dream Drop Distance makes Disney feel like an afterthought while simultaneously losing the pull of Final Fantasy.

Alexa Ray Corriea is a reporter for Polygon, and owns more than one full-sized keyblade.

KINGDOM HEARTS 3D CAN'T GO THE DISTANCE ON ITS OWN

The weakening of its two founding pillars causes Kingdom Hearts 3D: Dream Drop Distance to falter. There's a failure to build investment in the story, the Dream Eater system trashes reliable and beloved AI companions for a convoluted PokÃ©mon substitute, and some passable combat can't pick up the slack left by choppy pacing and the maddening Drop system. Some of these problems could have been softened by the expected dose of Final Fantasy and Disney, but those roots have shriveled. Despite a decade of groundwork, Kingdom Hearts 3D can't go the distance on its own.