It's the dream of every upstart MMO that has aspired to knock the multi-million dollar crown from World of Warcraft's head.

"We can give them more quests! We can make more loot! We can write more dialogue! We can make so much stuff that you'll never need to leave our game!"

It's an admirable goal, and the engine that makes the whole genre run.

Here's what I can't figure out: Why is Kingdoms of Amalur: Reckoning, a single-player RPG with no online component to speak of, jockeying for the throne? 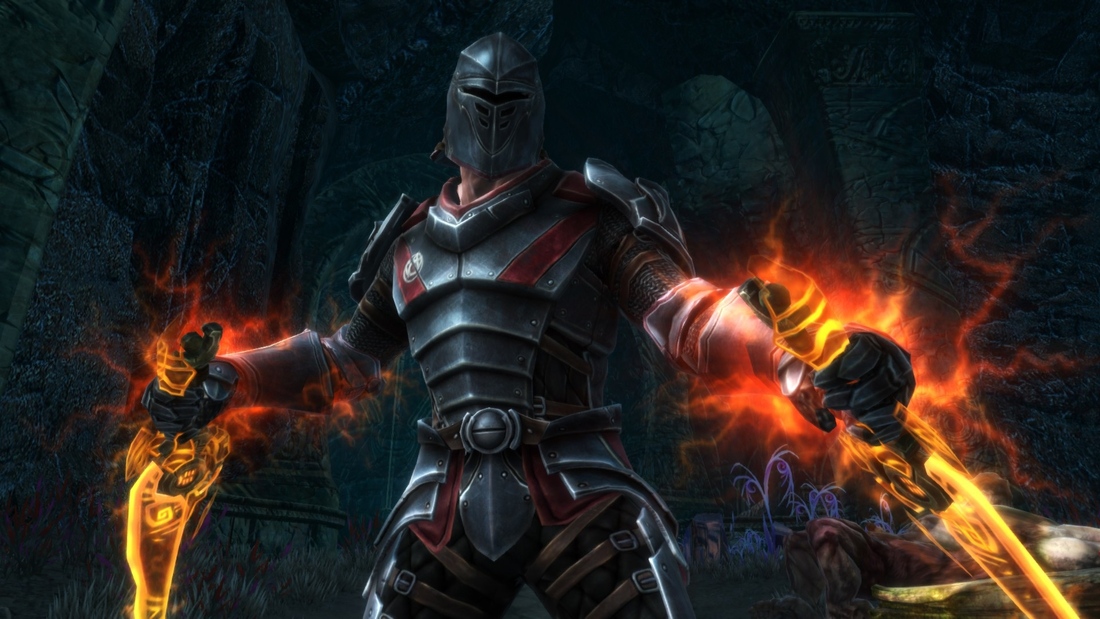 Origins don't get much more humble: Your character begins his or her story dead as disco, and the fact that they're soon up and stabbing isn't even the weird part. The odd thing is that this hasn't happened before.

In what could be a sly reference to the nature of fantasy structure in a better written game, the world of Amalur is driven by constantly repeating stories. Members of the immortal fae race live a certain story, die, and then live it again. It may sound dull, but it gives the entire world a hearbeat even the non-immortals can rely on.

So, yeah, big deal, you came back from the dead. That's a Tuesday for a fae. The quirk is that your character is very much not a fae, and that's made the constant, dependable land a much more ... complicated place to be.

Anathema though it may seem to Amalur's residents, your decisions are truly your own, and fate's designs for you seem to have little sway. Video games often put your character at the center of the universe, but Reckoning takes this to the logical extreme: You're literally the most important thing in the world, and the course you're charting leaves a wake that sloshes across Amalur.

THE WORLD OF AMALUR IS DRIVEN BY CONSTANTLY REPEATING STORIES
"AND FOR MY NEXT TRICK, I MADE ALL YOUR SKIN DISAPPEAR." 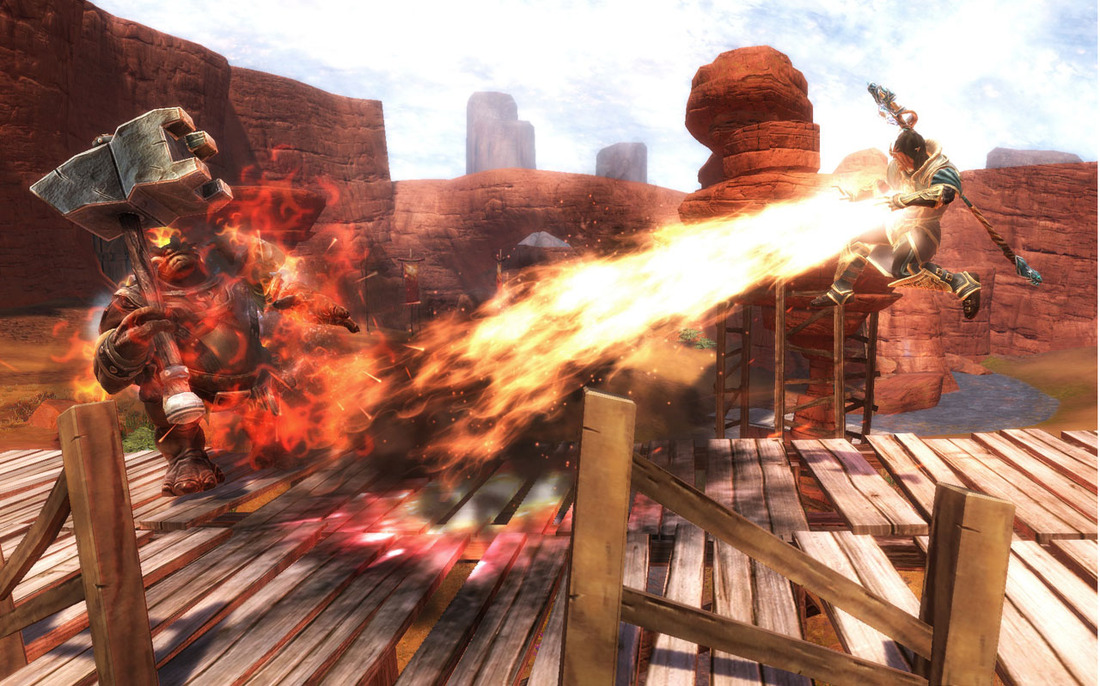 The freedom to chart a progression and choose a character's attributes is a little more than a bullet point in most games. But given how integral freewill is to Reckoning's plot, its skill tree needed to be especially flexible, if only to support the narrative.

Split into the classic fighter/mage/thief trifecta, it's possible to follow a very linear path and learn only melee, magic or stealth. But Reckoning smartly subverts that min-max impulse with specific bonuses dependant on the split of skill points. Evenly dividing your points between might and magic? Your character will learn the ability to turn damage into mana. Piling it all into wizardry? Expect big mana bonuses.

It's even relatively easy to wipe the slate clean and explore a completely different skill tree. It doesn't take long to pick up on any ability set, which, while convenient, is also a troubling testament to how little fundamental difference there really is between the three branches.

No matter what your split, you'll get a powerhouse that feels absolutely devastating in combat. Even in the magic tree, there are abilities like the chakrams — two razor sharp mid-range weapons that wouldn't seem out of place in the hands of Kratos — that make battles in Reckoning feel appropriately visceral and kinetic.

Reckoning's fluid, flexible combat is the key area where it strays from its MMO influences, and its no coincidence it's the best part of the game. It's only when your hero sheathes their razor discs that the cracks start to show.

As the fledgling studio demonstrates throughout Reckoning, 38 Studios is capable of creating a satisfying mission. When it knows where it's going, like when you're on one of the faction questlines for the local mercenaries or thieves, the game's a joy. It's well written, well constructed and has a real sense of urgency pushing on to the next objective.

Quests lead you across lovely environments, so excitingly diverse that they seem meteorologically improbable. The look is an impressively display from art director Todd McFarlane, who's spearheaded the creation of a truly lovely world. Where Bethesda's Skyrim tries to capture the gritty believability of a dark fantasy novel, Reckoning is more evocative of that novel's cover, lush, colorful and exquisitely detailed.

It's clear that 38 also possesses at least the potential to create multi-dimensional characters to live in this beautiful world. Agarth, for example, a gruff soothsayer that's delighted by his inability to see what the future holds for your protaganist, is — if not a satisfying character, at least an intriguing frame for one.

But at every tent city, farmhouse and crossroads you'll meet a handful of new questgivers (calling them people would be far too generous), all of whom have things they want done. The vast majority of Reckoning's missions range from innocuous to maddeningly dull, with a slim handful that are actually worthwhile.

"WELL IT'S A HELL OF A LONG WAY FROM SPAWN, THAT'S FOR SURE."

The puzzling thing is that there are so many of them. Hundreds. Hundreds of necklaces to retrieve from caves, nephews that have gone missing and bears that plague the local ... well, you get the idea.

At first, the steady stream of great loot Reckoning drops makes it easy to ignore. But as that levels off (or your character gets more proficient at crafting) monotony buries its teeth in your adventure and refuses to let go.

The side quests cluttering your log not only pale in comparison to the good stuff, they actively distract from the decent quest lines and can really kill the momentum. A dedicated player could probably unearth upwards of 80 hours of content in Reckoning, though they'd only enjoy around a quarter of that time. If the good hours were in one lump, this might be an easy recommendation, but as it stands, they are oases, and none deep enough to ever refresh.

RECKONING IS DROWNING IN ITS INFLUENCES, AND THE ENJOYABLE 25 HOUR ACTION-RPG WITHIN IS GASPING FOR AIR.

There are plenty of lessons to learn from MMORPGs. They're great at creating an expansive world that feels worth exploring and letting players craft an avatar and experience that is personal and unique.

If 38 Studios had picked up on those facets, rather then filling its debut with the chaff that's the unfortunate logistical necessity of games that have no end, it would have made something incredible.

Instead, we're left with a game that has picked up lots of nasty habits from World of Warcraft and its predecessors, with none of of the expertly designed structure or online interaction that makes the best MMOs worth returning to.

Reckoning as presented is a game that's drowning in its influences, but there's an enjoyable 20-25 hour action-RPG floating in there somewhere if you're only willing to fish for it. The trick is in ignoring the excesses crowding out the worthwhile adventure and, in doing so, exert the restraint that seemed to elude its creator.

Kingdoms of Amalur: Reckoning was reviewed using code provided by EA. You can read more about Polygon's ethics policy here.