Where did The Two Guys from Andromeda go during their 21 year hiatus?

The last time Scott Murphy and Mark Crowe saw Space Quest in development was for a sequel bound for a deep burial in the history books. Space Quest VII was never made, although a trailer and the odd piece of concept work can still be found floating around online as near-forgotten ephemera. It's been nearly two decades since then.

Murphy and Crowe started working for Sierra in the '80s on various projects before their camp adventure game satire was in development. The games starred Roger Wilco, a hapless loser who perpetually saved the universe only to be punished for violating minor regulations. The series, starting in '86, kept a tight grip on science fiction and comedy, and parodied everything from Star Trek to Microsoft through the years. Crowe left by its fifth iteration, but it ran right up until the mid-90s when its seventh installment was canceled and suddenly Murphy found himself laid off.

You can blame the death of Space Quest on a major shift in taste that appeared by the latter half of the 90s. By '98, poor sales on LucasArts' Grim Fandango rang the death knell for adventure games in the ears of publishers.

"It was very difficult to try and sell a publisher on the idea of doing another adventure game because they all assume the genre was dead. We always wanted to do these things but there were no opportunity with publishers. It became Generation Xbox," says Murphy. "There was really no interest in it."

There has been over 20 years of silence from Two Guys from Andromeda, the men at the helm of the franchise. The last time they worked together directly was in 1991's Space Quest IV.Since then things had been touch and go. That is until last April when they appeared on Kickstarter, seemingly where they left off.

Mark Crowe has been in the games business all this time, he says. He worked as a studio design director for Pipeworks Software for 12 years in the console games business after spending almost 10 years doing PC games for a subsidiary of Sierra Online in Eugene, Oregon.

While Mark moved on to Eugene and started a family, Scott stayed with Sierra Oakhurt until he was laid off - "the old 'Sierra Proper' if you will: where the company got started," says Scott. It was a sudden change, but not necessarily a negative one at first.

"IT WAS AMAZING I DIDN'T REALIZE HOW MUCH PRESSURE WE'D BEEN UNDER."

"Amazingly enough after I lost the job I felt like a ton of weight had been lifted from me. They had us working at a pretty brisk pace on Space Quest. Both of us had gotten kind of fried on those things, at least I did. It was just one of those things where...I was FRIED. I needed time away and it was amazing I didn't realize how much pressure we'd been under.

"Honestly, I went through some personal issues, I had those going on too with a divorce and things like that. And given the change in nature of the business and not being like Mark where I didn't have this art background thing to fall back on (everything I've done has been self-taught, the programming and all that) I took some time off."

Scott went to work for a family business in Chicago for a while in the interim, part of what would be the beginning of a long break from game design. Then his mom got sick. He moved down along the gulf coast to Alabama to take care of her. His step-dad died, and then within the year Hurricane Ivan hit. His mother's health has been in decline since and he's been taking care of her for the last seven and a half years.

"And then just recently, a few months ago, Mark and I got in contact again and we saw what was going on with Kickstarter."

"THERE WAS ALWAYS SOMEBODY WHO WANTED TO PUT THEIR FINGERS IN THE SPACE QUEST PIE."

Over the years Scott and Mark went their separate ways but several times since the two have gotten back together to toy with the idea of resurrecting Space Quest. "Unfortunately with the license being held by other entities it was kind of difficult," says Mark.

Their experiences with publishers left them jaded. "It was tough," says Scott, "because it seemed like there was always somebody who wanted to put their fingers in the Space Quest pie." This left Kickstarter as the open alternative. They began their campaign in mid-April, asking old fans to help fund work on a new game called SpaceVenture. It would be an updated throwback to the Space Quest series of yore.

He admits both of them have experienced growing pains with the funding platform, now having to learn an entirely new funding model that neither of them had encountered before. Scott lists the problems they came across: there's the issue of keeping people happy, of communicating with them, of monitoring everything, keeping an eye on chat rooms, comments, and Facebook pages, and most importantly of representing yourself.

"It's taking a lot more of our time than we expected. Kickstarter is sort of a living, breathing thing. We learned lessons daily and it seemed to evolve daily, in the perception of the public and the strategies being used to get projects out the door and funded."

And it's filled with competition. Kickstarter is a hive of activity, quickly becoming the stomping ground of famed designers from their generation. Scott lists those too: Al Lowe, Paul Trowe, Ron Gilbert, and Tim Schafer. Then there's the swelling tide of upcoming and independent developers using the platform to fund their own projects.

"With Kickstarter something that concerned us is the saturation point with backers. They want to back all these games and there's only so much money. They need to be really choosy so it's getting competitive."

An alternative would have been to rely on venture capitalists instead. But that's not something either of them would have jumped to without being pushed. Mark and Scott met for the first time working for Sierra founder Ken Williams on The Black Cauldron in the mid-1980s. It was their first experience with the darker side of development's business end.

"Publishers on the other hand are beholden to their shareholders and they've got to make a certain return on their investment and they really have to be cautious about the kind of games they do. With the fan funded model, that's been removed from the equation." 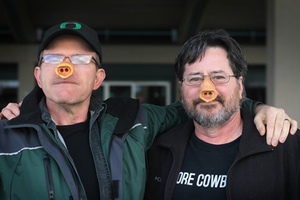 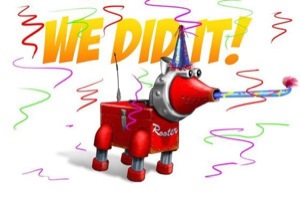 Just over a week ago The Two Guys from Andromeda reached their Kickstarter funding goal for SpaceVenture, and then some. Fans pledged the necessary $500,000 the developers asked for, and then added nearly $40,000 on top of that.

The plot for their game is in development as part of what they both call the pre-production phase of the game. They have an ideas board of what they want to include which they're in the process of coalescing into a cohesive story. Like their early franchise, it will parody pop culture and sci-fi, focusing on material that's come out since the series disappeared.

"But as far as gameplay we've gotten a lot of opinions on which games we made in the past people like the most, and while they like the whole series we've got interesting feedback about Space Quest III and Space Quest IV specifically," says Scott. "It will be a less linear experience than adventure games took in the past. It will allow people to go to an area and if they get stuck they can still move on elsewhere. This may be more along the lines of a role-playing game. In terms of gameplay we're looking to make the player more mobile within the universe. And when we talk about a universe we're literally talking about a universe in Space.

"WHEN I TALK ABOUT IT NOW IT GIVES ME GOOSE BUMPS."

"For the scope of an adventure game it could take anywhere from 8 to 12 months depending on the size of a team," he continues. "I think Space Quest III went 13 months because I was the only game programmer on it. Then as our system became more complicated and we had more employees involved, it seemed the more employees involved it went up by factors of 10. I'm guessing anywhere between 8 to 10 months realistically. We'd like to be able to take our time with it and not feel rushed. That's one of the things that made making games not very fun, the pressure of hitting a deadline."

Despite the brave new world of development they've entered into, Scott is confident their little piece of the 90s will find a home in 2012. He says these days he receives emails from old fans who tell them they learned how to type using the games he and Mark helped develop. Now those fans are playing those games with their kids. They email him about poignant moments playing their games with family members and friends who have since passed.

"When I talk about it now it gives me goose bumps," he says. "We still know what people like. We've had some good responses. It's definitely a different world, but now we are businessmen rather than employees." 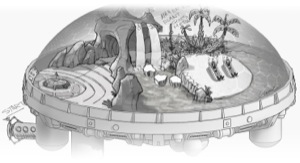 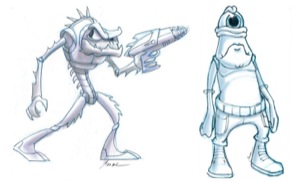