We go hands-on with Rockstar's shooter to see how it holds up when other players are tossed in.

When someone thinks about Max Payne, they don't think multiplayer. After all, the first two games in the series didn't support anything beyond a single-player campaign. So when Rockstar announced that Max Payne 3 would allow for online play, we were justifiably skeptical. Then we played it.

Multiplayer in Max Payne 3 feels like a blend of Call of Duty, Uncharted and Killzone. Expected multiplayer standards, like custom loadouts, are present, but the game takes it a step further, incorporating its own tropes to make the multiplayer fit with the rest of the game.

For example, the main mode of Max Payne 3 multiplayer is Gang Wars, has multiple game modes (Attack/Defense to Team Deathmatch to King of the Hill) over the course of a single match, connected by Max-delivered voice over telling the tale. But integrating narrative into multiplayer is easy in comparison to some of the other challenges Max Payne 3 faces.

We'll be delving deep into how Bullet Time works, what bursts are, and the scope of character customization. Brace yourselves. It's a lot to take in.

HOW DOES BULLET TIME WORK IN MULTIPLAYER?

As has been the case since the first Max Payne, killing foes in Max Payne 3 earns you adrenaline. Without adrenaline, dodging will cause you to dive in real time. Good for jumping out of the way of enemy fire, but it won't give you enough time to do much else.

If you have adrenaline built up from kills, however, dodging will cause you to enter Bullet Time for a slow motion dodge. This not only gives you time to line up a shot against an enemy target, but it also increases your rate of fire. Handy!

But there's a problem with this. In multiplayer, you can't exactly force everyone in the game to slow down whenever one person wants to enter Bullet Time. Other games have tried to solve this problem, giving a player an orb of influence, slowing down anyone that's nearby, but that's hardly in the spirit of the quasi-realistic Max Payne franchise. Instead, Rockstar has come up with something far more interesting...and complex.

Ok, let's say you're running down a hallway and you see an enemy with his back to you. You want to make sure you get the shot off, so you enter a slow-motion dodge, giving you more time and an increased rate of fire. 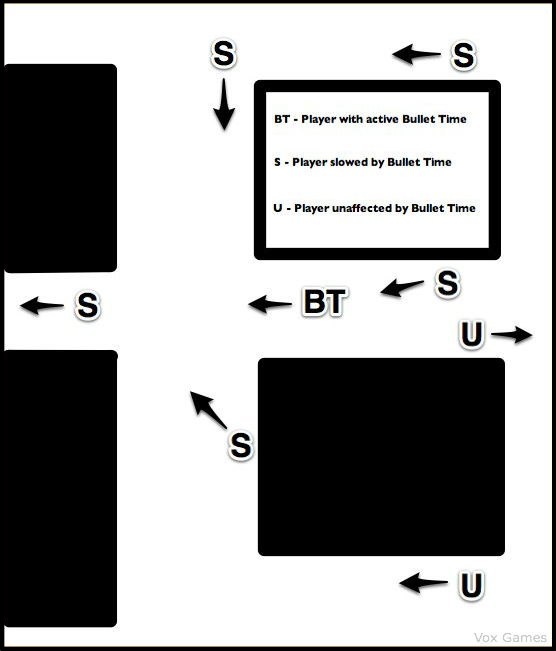 The moment you enter the Bullet Time dodge, anyone that you can see will be slowed as well, for as long as you keep them in sight. You'll both move at the same slow speed, but anyone affected by your Bullet Time won't receive the rate of fire boost that you've been granted for activating it.

Ok, pretty clear so far. But here's where it gets crazy.

Anyone looking at someone that's been slowed by your Bullet Time will also be slowed, even if you can't see them. Basically if someone sees the guy in front of you get slowed, they will also be slowed. This applies to both enemies and friendlies.

OK, PRETTY CLEAR SO FAR. BUT HERE'S WHERE IT GETS CRAZY

It sounds, well, crazy, but there's a reason behind the madness. Nothing would break the illusion of a Hong Kong-style action sequence faster than moving around at real time while someone is floating past you like they're on one of those zero-gravity parabolic airplanes. If you see someone in slow motion, you should also be moving in slow motion. Simple as that!

Worth noting that it's extremely easy to escape the grip of being slowed. All you need to do is break line of sight and you'll return to normal. You should also remember that most Bullet Time sequences last no more than a second or two, so even if you are trapped in someone's sights, it'll be over soon.

There are times, however, when Bullet Time can last much longer. That's when bursts come in.

Before entering a match, players can customize their loadouts. One of the options is selecting a specific burst.

The most basic burst is Bullet Time. It works just like a slow-motion shoot dodge but it lasts much longer and you can run around with it activated (as in it doesn't automatically end when you finish a dodge).

But there are other bursts that are far more exotic. Paranoia, for example, causes the enemy team to see all player tags as enemies, including their own teammates. Another, Weapon Dealer, gives your entire team infinite ammo for 10 seconds. And then there's Trigger Happy, which grants you armor piercing ammo for 20 seconds.

These are just the level 1 bursts. At level 3, Paranoia turns on friendly fire for the enemy team while showing everyone as hostile. The right burst at the right time can be a real tide-turner.

HOW ELSE CAN YOU CUSTOMIZE YOUR CHARACTER?

In addition to bursts, there's a somewhat overwhelming number of customization options for players.

The first is simply cosmetic customizations: Changing what your character looks like and what they are wearing. Unlike previous Rockstar multiplayer modes, all of these purely visual customizations are unlocked at the outset. No need to rank up or spend cash on a shirt you really want, or to unlock the character model that sort of looks like you.

The second customization option is, predictably, weapons. You can pick from an assortment of assault rifles, pistols, shotguns and grenades, but don't go overboard. The more equipment you bring into battle, the slower you'll move and heal after being damaged. Most of the weapons are locked when you start playing, requiring that you rank up in multiplayer before you're able to purchase them.

The third major customization option is gear. Players should think of gear like the perks in Call of Duty. You'll be granted certain passive enhancements if you're wearing the right gear. For example, a mask that prevents you from being stunned or a bulletproof vest that increases your damage resistance. There are five "gear slots" for these passive abilities, but keep in mind that gear, like weapons, can weigh you down.

There's a lot to digest about Max Payne 3 multiplayer. It may surprise you to learn that there's still more I haven't mentioned. Vendettas can be placed on anyone that kills you twice in a row, granting you an XP bonus for enacting revenge. Customizable clans, called Crews, can be formed, letting you pick an emblem and tag for your team. These will actually carry over to GTA 5 multiplayer via the Rockstar Social Club. Finally, pre-match wagers allow players to bet in-game cash over who can get the most headshots or captures in a round.

I had gone into my multiplayer hands-on session expecting an amusing ancillary mode to Max Payne 3's single-player campaign, but what I found was something as robust as any other multiplayer shooter in the genre. If Max's return was a big deal before, it should now be a lot bigger.