The legacy of Portal is both a boon and a curse to Quantum Conundrum, a charming first-person puzzler from Airtight Games.

Quantum Conundrum is fruit of the same family tree that produced Valve's popular Portal. Airtight Games' Kim Swift was the lead designer on Portal before leaving Valve to work on this colorful new game. With that shared parentage, one might hope for Quantum Conundrum to capture some of Portal's quirky magic.

Comparisons like that put Quantum Conundrum in danger of disappearing under Portal's shadow. The game can easily be written off as "Not Quite Portal" - Airtight's puzzles rely on sometimes wonky physics and the writing doesn't always work. But even with some problems,Quantum Conundrum offers a worthwhile goofy, mind-bending challenge.

Quantum Conundrum begins with the mute main character's arrival at his eccentric uncle's mansion for a visit. In this case, that eccentricity has left said uncle trapped in a pocket dimension, and he needs your help to escape. You'll be aided in this effort by a powerful glove called the IDS (interdimensional shift device). This technological marvel allows you to swap between five different dimensions at will: fluffy, heavy, slow, reversed gravity, and normal.

Each dimension is presented in its own clever visual style, from the washed-out brightness of the fluffy dimension to the sepia tone, silent film look of the slow dimension. Quantum Conundrum is flooded with small touches that kept me smiling, like the way pictures hanging throughout the mansion go through humorous transformations as you switch dimensions.

The family reunion isn't all sight-seeing. Quantum Conundrum's mansion is full of deadly obstacles that can only be navigated with the IDS. Each room contains a handful of puzzles, simple tasks at first - you might activate fluffy dimension to lift a heavy safe onto a switch, or jump into the slow dimension to safely navigate a series of rotating death lasers. 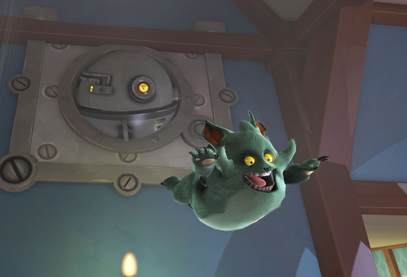 As the rooms grow in complexity, you'll find yourself in situations that call for the use of multiple dimensions. More than once, I was stuck staring dumbfounded at a room for tens of minutes. But the struggle comes paired with reward; solving some of these brain-teasers made me feel like a genius, even if I had to turn to help from friends once or twice.

I felt a whole lot less brilliant fumbling with Quantum Conundrum's physics. While many puzzles are set up with all the pieces perfectly in place, some require you to stack safes, throw boxes, or use reverse gravity to ride furniture across pits of deadly "science juice." These challenges leave you at the random whim of Quantum Conundrum's unpredictable physics engine.

'QUANTUM CONUNDRUM' ISN'T AS TIGHTLY-WOVEN OR CONSISTENTLY FUNNY AS 'PORTAL' 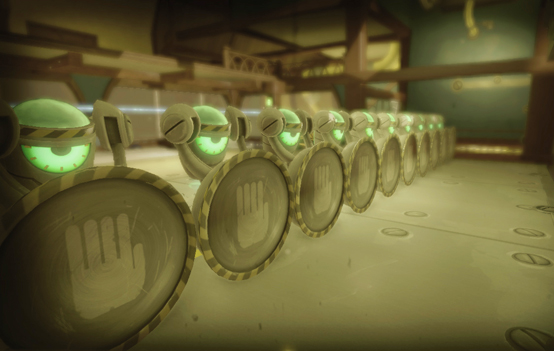 Is the safe that I just tossed across the room going to land - and stay - perfectly on that switch, or is it going to wobble just enough to fall off? Will the stack of boxes I'm balancing on hold steady or topple? Failure usually just means retrying a tiny portion of gameplay no more than a minute or two long, but it's frustrating when you have to do so multiple times and when your success or failure depends largely on luck.

Despite issues with the physics, Airtight Games has nailed the easy-to-screw-up first-person platforming in Quantum Conundrum. I was able to jump from floating tables to tiny ledges with the same speed and accuracy I would expect from a third-person platformer. The height and length of jumps may not make much sense for the protagonist's young age, but they feel just right for gameplay.

As you make your way through the mansion, your uncle continues a running commentary, lobbing out backstory, jokes, and even the occasional insult. His dialogue is enough to keep the mood light even when you're banging your head against an especially tough puzzle, but it isn't as tightly-woven or consistently laugh-out-loud funny as GLaDOS from Portal.
Philip Kollar is the Deputy Reviews Editor of Polygon. He loves having fun with science but hates science juice. Follow him on Twitter @pkollar.

QUANTUM CONUNDRUM IS AN ENJOYABLE ADVENTURE THAT EARNS ITS TINY FLAWS

And thatâs what Iâm worried will push players away from Quantum Conundrum. It borrows all the recognizable parts of Portal â devious puzzles, an intriguingly deadly setting, a funny narrator â but it doesnât have the polish of Valve, that uncanny ability to pull everything together into a perfectly cohesive whole. If thatâs enough to keep you from playing, so be it, but youâll be missing out on an enjoyable adventure that earns its tiny flaws.