The burden of proof rarely weighs so heavily on a game as it does on Resistance: Burning Skies. It is saddled with an amount of pressure that few games of this generation have known - and not only because it's an early release on a handheld that yearns for more system-selling software. Resistance: Burning Skies is a first-person shooter, and the PS Vita (with its twin sticks and big, beautiful screen) has promised to be the first portable game system to make the genre work in the handheld format.

Resistance: Burning Skies looks and acts antiquated much of the time. With its clipping, visual artifacts, and countless monster closets, it sometimes resembles a shooter from the PSOne era. Despite these problems, Burning Skies feels fantastic and provides a particularly worthwhile online experience that might just be enough to save it a place in the handheld history books.

Resistance: Burning Skies' campaign is a mess. The six-chapter tale of firefighter Tom Riley apes so many aspects of other, better shooters: the panic and despair ofResistance 3, the messianic overtones of Half-Life 2, the sentimentality and loss ofGears of War 2. The derivative end result can't lay claim to even a fraction of the narrative strength of its inspirations.
The joyous assortment of multifunctional, upgradeable weaponry that Resistance is known for returns here, but it carries its own suite of problems. The weapons aren't balanced, and ammo is scarce for everything except the Bullseye, Resistance's standard machine gun. This forces you to swap between weapons for a while, but upon unlocking a gatling gun around two-thirds through the game with an alt-fire that blows up most of the screen without consuming ammo, I didn't really have need for anything else. 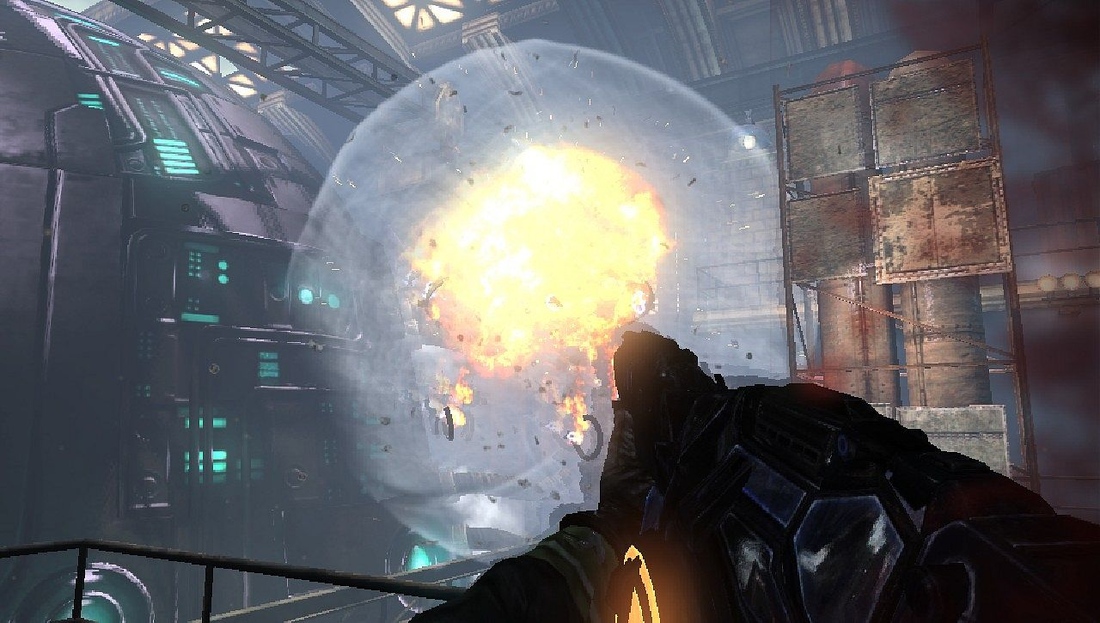 The powerful alt-fire abilities for each weapon are activated via the Vita's touch screen. It's a tactile, satisfying process, but a clumsy one - which presents a clever trade-off. You can activate the Mule's explosive crossbow bolt to clear out that room, but first, you'll have to take your thumb off the right stick. Deciding when to take that risk adds a much-needed layer of strategy to the action. 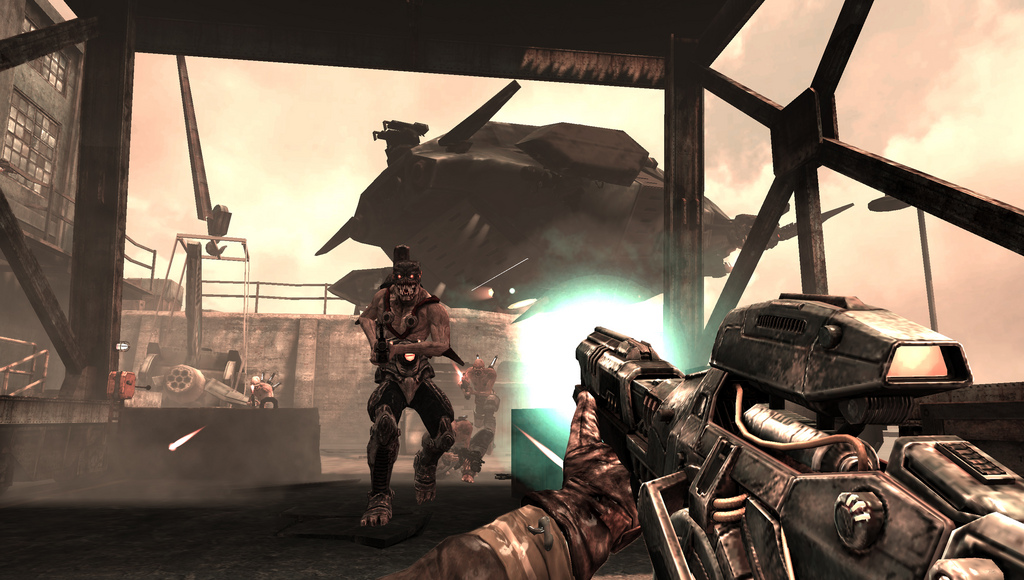 "THE JOYOUS ASSORTMENT OF MULTIFUNCTIONAL, UPGRADEABLE WEAPONRY THAT RESISTANCE IS KNOWN FOR RETURNS HERE, BUT IT CARRIES ITS OWN SUITE OF PROBLEMS" 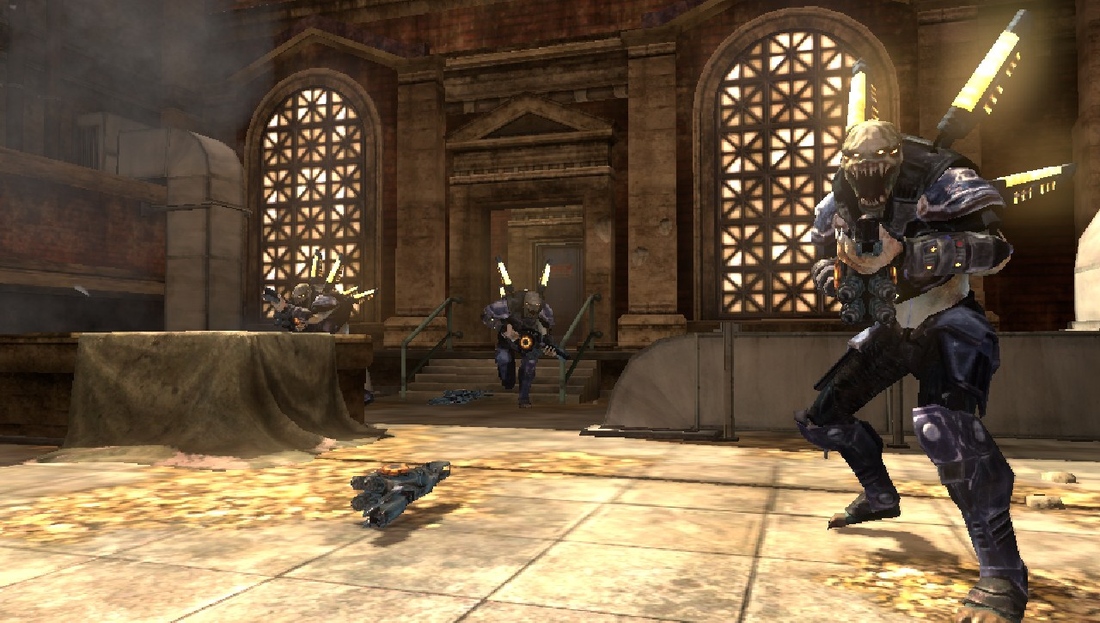 Other touchscreen additions, such as dragging grenades from the side of the screen to their ballistic destination, are neat if gimmicky, but regular control options are rock-solid. The fundamentals of moving, covering, aiming, and shooting feel just as tight as any shooter played with a DualShock or 360 controller.

You'll be using those controls to clear out the same groups of enemies and same two minibosses with very little deviation.Resistance: Burning Skies does almost nothing to shake up the gameplay loop of hiding behind cover until the enemies in the room expose their explodable heads. The campaign makes wise use of this rote formula only in that it ends just as the repetition grows stale.

Resistance: Burning Skies' campaign includes collectibles such as Gray Tech, colorful cubes that allow you to upgrade your weapons. I enjoyed the noticeable effects on my guns for finding these bonus items, but they require almost no effort to locate in the linear levels. If you do manage to miss any, prepare for the annoyance of replaying the campaign from the beginning to find them; Resistance: Burning Skies has eschewed a Chapter Select option for New Game+ mode. 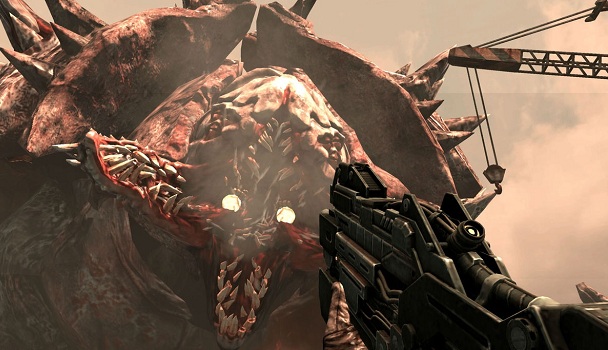 Resistance: Burning Skies also lacks polish in its presentation, with problems that most high-profile first-person shooters have learned to avoid. Characters occasionally pop into view as if by magic, and enemies shot near walls will invariably clip through them. Motion comic cutscenes bridge each chapter, but they have been compressed to a perplexing degree, leaving these otherwise stylish interludes with awful image quality.

The campaign's strong fundamentals can't make up for its cinematic and imaginative failings, but those weaknesses don't drag down Resistance: Burning Skies' surprisingly enjoyable multiplayer. Players can only choose between Deathmatch, Team Deathmatch and Survival (similar to Halo's Zombie gametype) modes and a handful of arenas - but what Burning Skies lacks in variety, it makes up for with simple, straightforward fun. Though antiquity sullies the campaign, it enhances the multiplayer.

The no-nonsense run-and-gun matches feel like a good simulation of Doom or Quake rather than yet another knock-off of Modern Warfare, but some signs of modernity sneak through in the form of the multiplayer progression system. Players earn experience for victory, kills and other feats, which they use to unlock the same upgrades found in the campaign. They can build up to three loadouts with a weapon, two upgrades and grenade type, which can be switched between at will during a match. Resistance: Burning Skies' multiplayer requires more than shooting faster than your opponent; you must learn their loadout and adjust accordingly. Successfully making that split-second distinction is rewarding every single time.

BURNING SKIES WORKS AS MORE THAN JUST A PROOF OF CONCEPT

Resistance: Burning Skies doesn't quite deliver a console-quality experience, but it effectively proves that first-person shooters are possible on the Vita. The interaction that has eluded all other handheld shooters actually works here, though Burning Skies doesn't just work as a proof of concept. The pitch-perfect controls and delightfully old-school multiplayer mode justify this game's existence beyond novelty.