Sometimes, good ideas are a burden.

A game that coasts on convention can get by on just that. But take a sequel to a game that managed to set itself apart through good ideas that haven't been successfully duplicated since, and you're swimming against the current. Which is exactly where The Darkness II finds itself. As a sequel to a sleeper title that defied genre conventions at every turn, the announcement of The Darkness II seemed a bit tawdry, but new developer Digital Extremes has managed to respect the original, flawed game, even if they can't quite share the same success.

The Darkness II opens several years after the first game, with protagonist and titular wielder of The Darkness itself, Jackie Estacado, growing complacent and glassy-eyed as the head of the Franchetti crime family. Still reeling from the loss of his girlfriend Jenny, he's buried The Darkness down deep and resolved to keep it there. Until the requisite "but then" goes down: A secret society called The Brotherhood drags Jackie into a supernatural turf war with the power of The Darkness itself at stake. 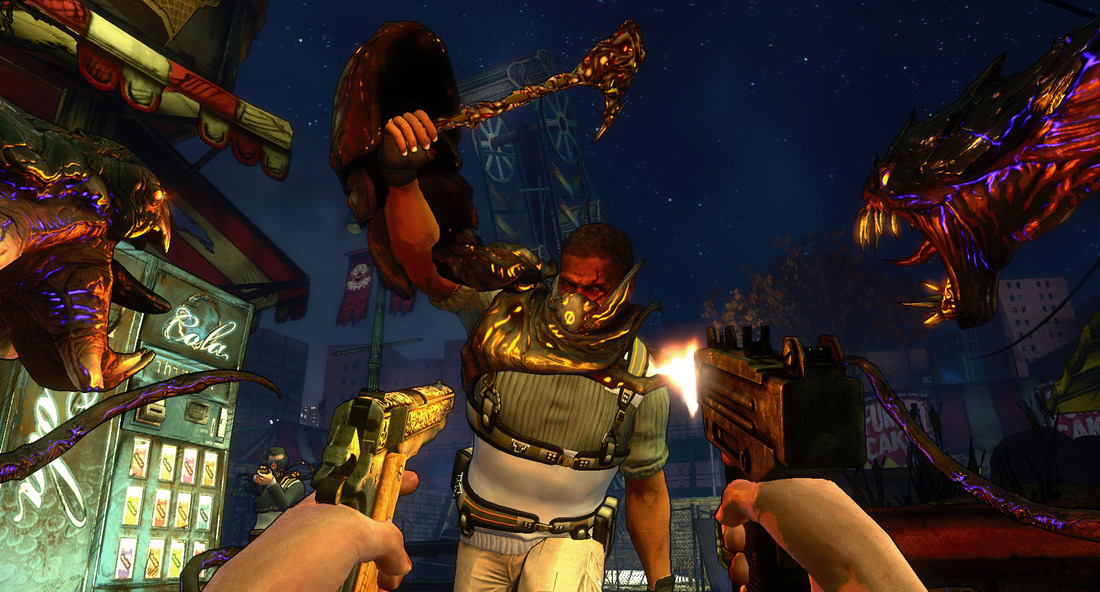 The real killing gets done with the darkness itself

The Darkness II does best, mechanically speaking, when it diverges the most from its first-person peers. The gunplay and shooting are functional, but not great. It's smarter just to pump a hail of bullets in the direction of trouble and let things sort themselves out. Eventually you'll find guns that seem more effective, but the real killing gets done with the Darkness itself.

Jackie's abilities from the previous Darkness title have been streamlined. Any trick of Jackie's dark side predicated on exploration or subterfuge has been jettisoned in favor of a more agile, combat focused pair of projections. Jackie's serpent-like demon arms make their return in a more vicious, hungry state.

These additional appendages open the combat up like so many eviscerated mob goons. While the arms' repertoire is a bit limited — the left head grabs, while the right arm strikes — the relatively wide open combat arenas and the first few levels filled with fodder wiseguys encourage experimentation, with some fun and gory results

"WHO KNEW CAR DOORS WERE SO USEFUL?" 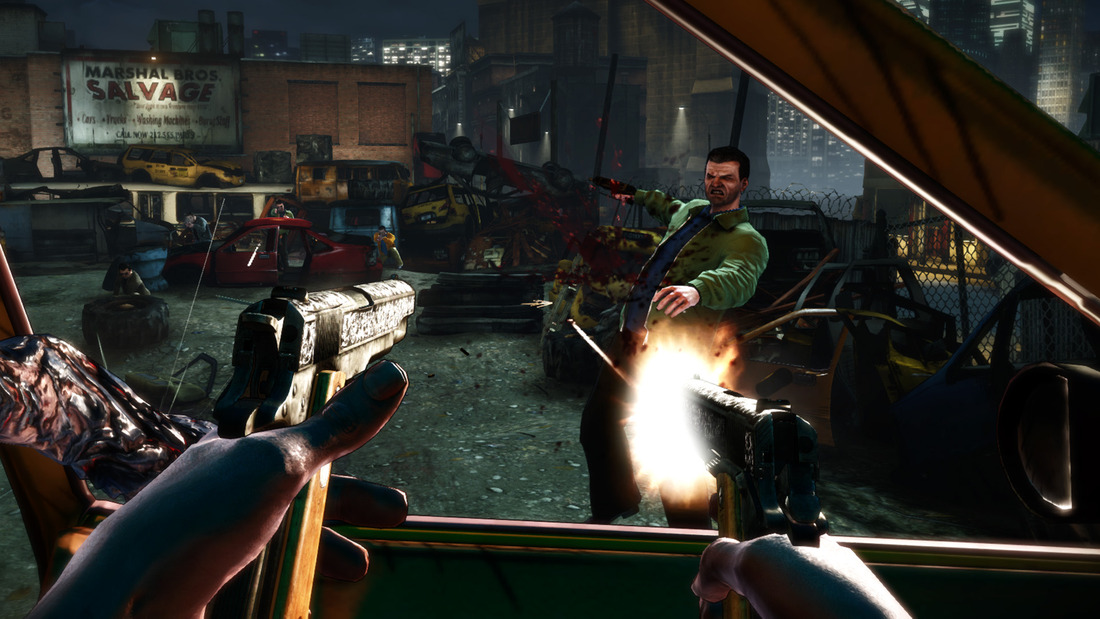 That gore starts ... well, not small, but fairly simple; but over time, you'll earn points that can be used to unlock new means of bloody dispatch. These new "executions," as they're called, serve a purpose beyond the prurient. Each yields a different benefit, from more ammo for your weapons to a shortened recharge time on Jackie's pair of new abilities.

Those abilities and other upgrades are unlocked with points earned from killing enemies, and more elaborate kills involving the Darkness, rather than Jackie's guns, give more points and — you see where I'm going with this. It all comes together reasonably well, with an organic justification for trying new things and using the Darkness's abilities in new and clever-ish ways. 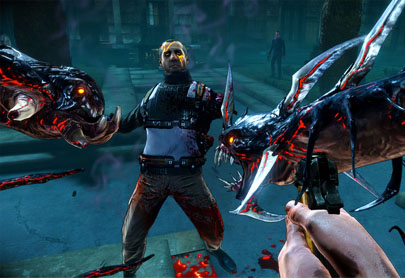 But then the first boss battle happens. And yes, there are a number of sections so clearly marked and littered with contrived limitations that to call them anything but boss battles would be a lie. And they're all universally boring — when they're not busy being terrible. The problem with these moments lies in Digital Extremes' seeming inability to differentiate between establishing a challenge and screwing you over. The Darkness loses its power in light, and sure, it makes sense that enemies would make use of that. But when the screen goes bright white for as much as 20 to 30 seconds and you die again from an enemy that you couldn't even see, it's not the Darkness that's nowhere to be found, it's the fun.

The Darkness II gets bogged down in genre conventions in other ways as well. The Darkness's fiction establishes that Jackie can't die — The Darkness won't let him. In fact, this is used in the story several times. But take enough damage in a firefight and it's back to a checkpoint just a little further back than it feels like it should be. No fanfare. No acknowledgement in the game proper. Same as any other shooter.

"AND SOMETIMES THINGS GET WEIRD. 'ONE FLEW OVER THE CUCKOO'S NEST' WEIRD." 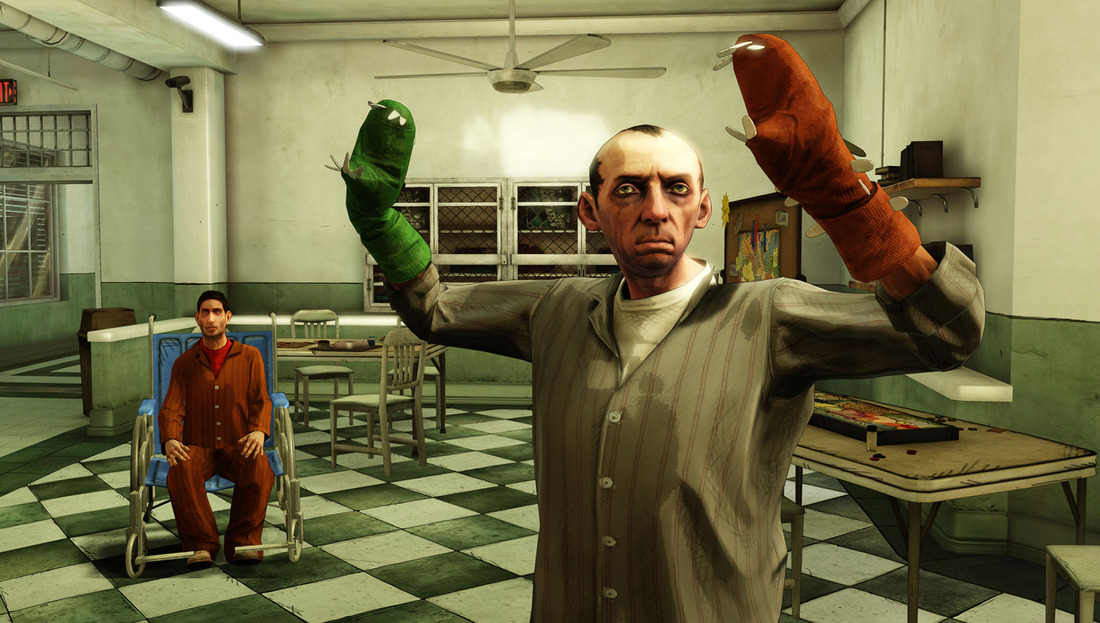 This is one example among many of opportunities presented by the fiction to try for something different and more interesting, opportunities The Darkness II establishes and then squanders. More confusingly, certain elements from the original that served to make it more immersive (like using coloration and lights on the demon arms as the game's UI) have been jettisoned for the standard shooter HUD. Is that a crime? Of course not. But the premise's promise allowed for more, and it's disappointing to see such oversights.

The original Darkness wasn't perfect, but it was held together by its story and characterization. It was a game whose most interesting aspects were the human relationships, explored in a way few games try, let alone manage, The Darkness II isn't as broadly successful here either The Brotherhood storyline is boilerplate comic book melodrama, and the Mafia element is a cliche'd mess. Things do get interesting as Jackie's mental state is called into question.

As The Darkness whispers to Jackie in tones of violence and madness, he starts to see visions of Jenny that transition into full-on hallucinations and flashbacks. These things have been done before, but as Jackie flashes back, his desperation is so well depicted that it's hard not to be taken in as he dances with the memory of his dead girlfriend to "I Only Have Eyes For You." The tension and emotion isn't hinted at; it's there. Jackie's guilt over Jenny's death, his baggage over his responsibility for that, carries The Darkness II's narrative into interesting, heart-wrenching places. In this one, important respect, the sequel lives up to its predecessor and then some. It's haunting. And later, when I had to make a specific choice, I hesitated over something that had zero gameplay ramifications. And even now, I'm still not sure of what the "right" choice was.

After finishing the main game, I was emotionally drained. And going from that to the included co-operative Vendettas mode was tonally jarring. It's not that Vendettas is bad, exactly, but it's even more linear than the main game, and each of the four available characters possesses a single Darkness power and a melee weapon. This forces cooperation, but at the expense of less versatile, interesting-to-play scenarios. The concept is good — the co-op campaign fills in some story beats that are brushed over or happen off-stage in the game proper — but the execution is passing at best. 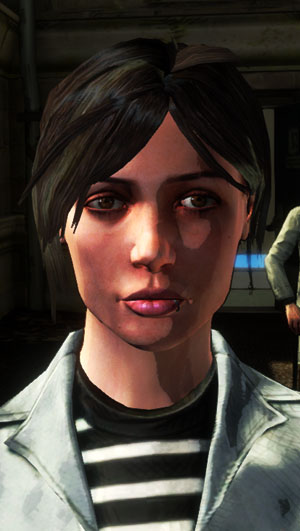 THE DARKNESS II'S GOOD IDEAS SHED LIGHT ON THE CHANCES NOT TAKEN.

This is The Darkness II's biggest problem: the potential for so much more is there, and Digital Extremes walks by it in a blur of blood and gunfire. The Darkness II is good more often than it isn't, but the good ideas that are present serve to contrast with the chances not taken. Digital Extremes has made a game worth exploring more than anything else for the human relationship between Jackie and Jenny, but it's easy to see how much more it could have been.

The Darkness II was reviewed using code provided by 2K Games. You can read more about Polygon's ethics policy here.