Looking to master one of the hardest games in recent memory? We've recruited the dev to help you cope.

As of this writing, 31,000 people have registered a high score in Spelunky. Of those 31,000, just 589 have managed to complete the game without using shortcuts. That's right around 2% or one in 50 players. That number's even lower when you factor in an ultra-secret ending, achieved by about one in 500 players. That's a long way of saying Spelunky is very, very hard.

But fret not! There are ways to become a master at this procedurally-generated platformer that don't involve merging with an AI. Derek Yu, the mastermind and creator of Spelunky, has kindly offered us some of his wisdom to help the masses survive the many devious traps he's left in his wake. 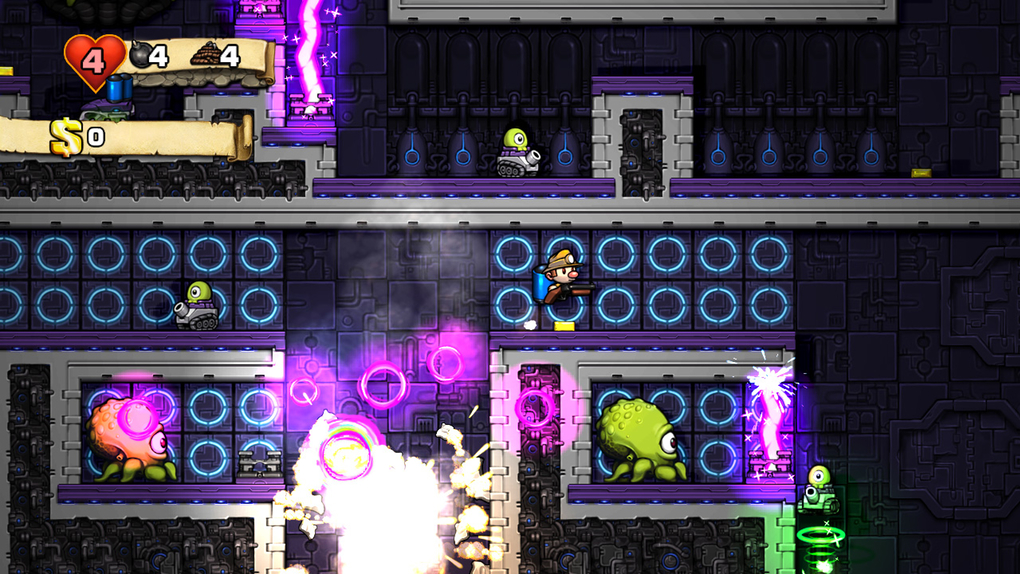 Yu: Spelunky was designed to be played like an arcade game where each time you die, you start over from the beginning. The shortcuts are there to make things a little easier for new players and to give you a way to practice new levels. If you use them, though, you'll be giving up lots of opportunities to gear up for the challenges ahead.

You should definitely unlock those shortcuts and use them, since that's what they're there for! But at a certain point, you'll find it easier to stop using them altogether.

2. LOOK BEFORE YOU LEAP

Yu: Spikes. Arrow Traps. Man-eating plants. Loooooong falls. There are lots of ways to die from simply dropping down an innocuous ledge. So before you take the plunge, make sure you hold down and see what's beneath you. If it looks risky, drop a rope and climb (by crouching before you hit the rope button).

Yu: Crates are most likely to have either a bag of three bombs or a pile of three ropes. Do the math and in most cases, you'll find that crates are worth using one bomb or rope to get, especially in the early stages of the game, when stocking up is crucial. And who knows? There's always that sexy chance that you'll luck out and get a jetpack instead. 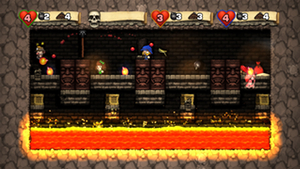 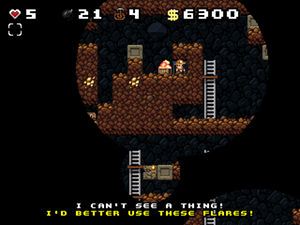 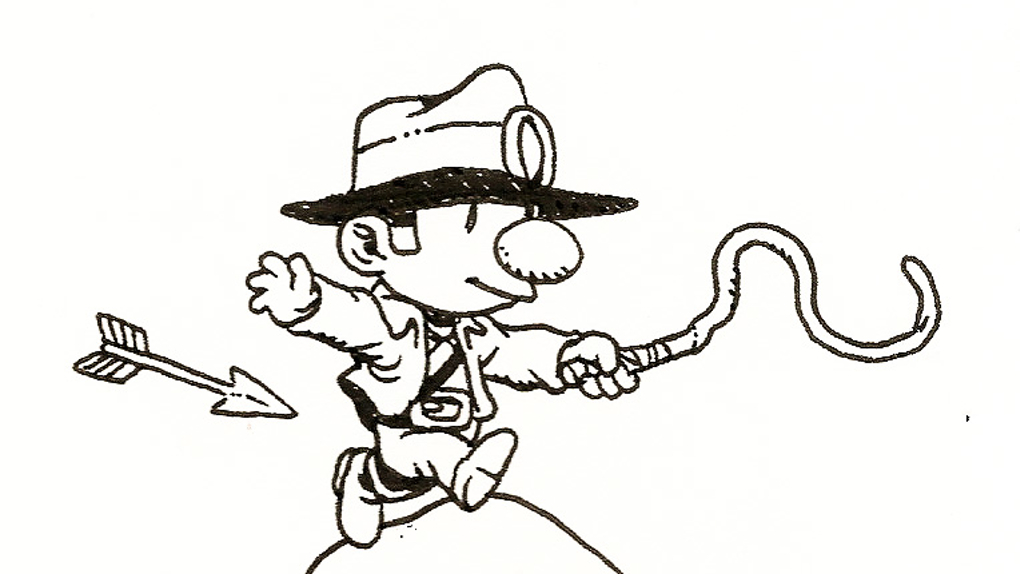 Yu: In Spelunky the best insurance policy is a nice paperweight in your hand. Rocks, pots, and skulls have many uses, either as weapons or to disarm traps, so you'll always want to leave each level with one, if possible. 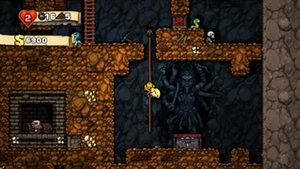 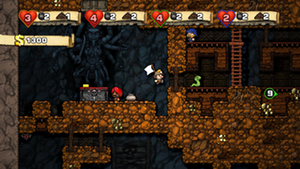 Yu: There's a large blind spot above your player character that can't be reached with the whip, making you an easy target for flying and leaping nasties. Thankfully, most items in the game have non-obvious secondary uses and the rope is no exception: it shoots straight upward and makes a nice projectile in a pinch.

Yu: When you're running off a ledge, you can take an extra step or two before you start falling. Take advantage of this to maximize the potential of your jumps. 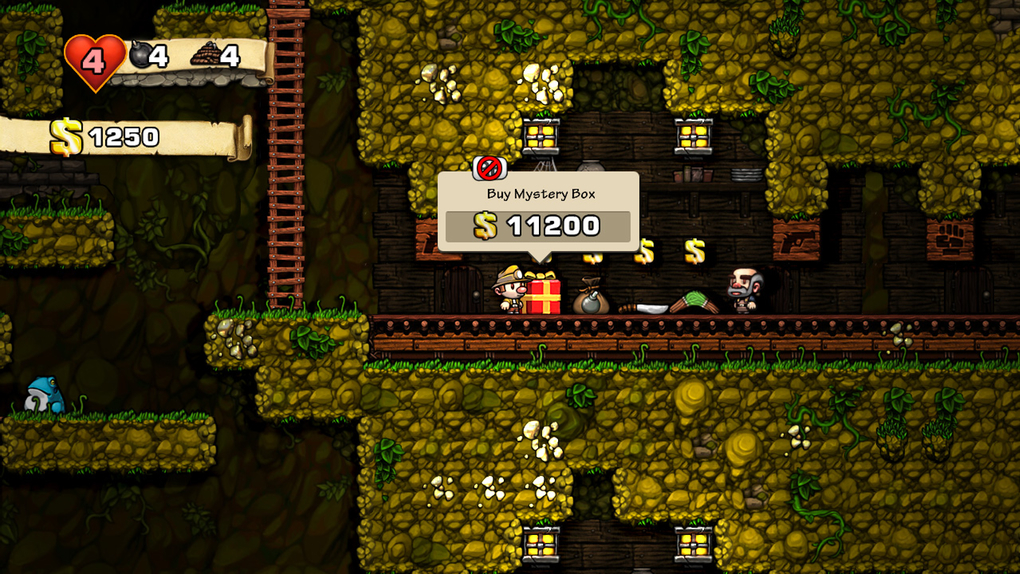 Yu: Your early shopping experiences often determine how a run will go, so make sure you develop a solid shopping strategy over time! Personally, I always try to make sure that I've earned enough treasure to take advantage of that guaranteed shop [in the mines], focusing on bombs and items that will help me get around, like the climbing gloves or spring shoes. Even if you're low on funds, there are some goodies that I think are a total steal, like the pitcher's mitt or the spikes shoes (both $4000). On second thought, forget that I used the word 'steal'!

Yu: Even though Spelunky is an action game, impatience and recklessness tends to kill you at least as often as poor reflexes. A lot of times, the difference between living and dying is whether you baited an enemy out to a safer spot or made sure that you had a wall against your back before you fired your shotgun. A little thinking ahead can save you a lot of grief.

Trust me, I know it's easier said than done, as I'm more of a Rambo-type man of action myself. My advice if you're having trouble staying alive? See how far you can get without the run button! You may find that it puts you in the methodical frame of mind you need to be in if you want to succeed (speed runs notwithstanding).

9. BRING SOME FRIENDS ALONG

Yu: Take some friends or family members into the caves and you'll have more than one brain to bash against the terrible danger that awaits you down there. Your runs won't affect the leaderboards anyway, so you should feel free to experiment to your hearts content! 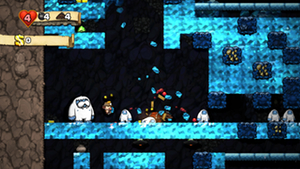 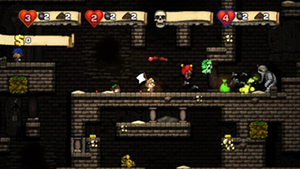 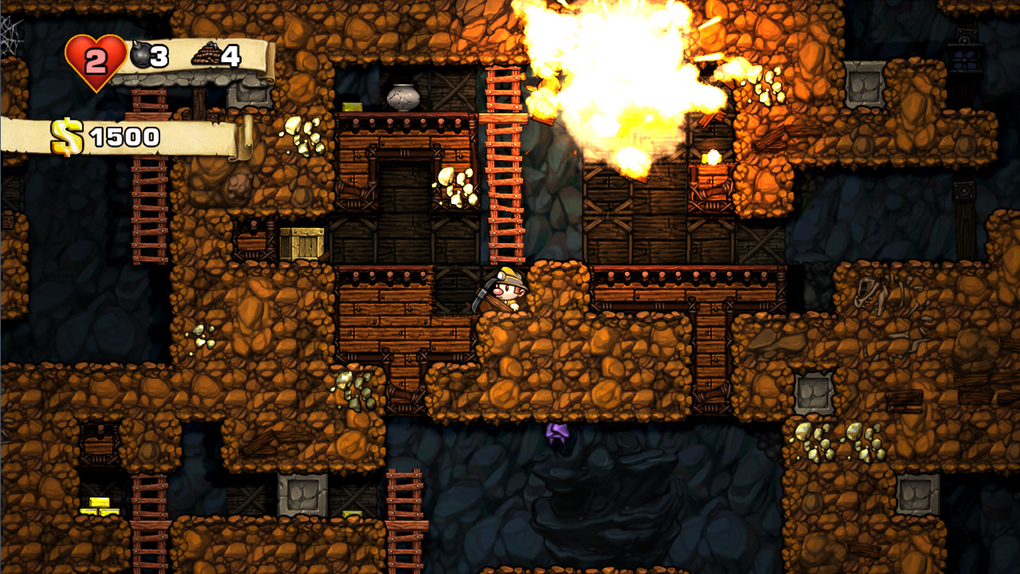 At the end of the day, survival is the key. How many times have you died with plenty of bombs or rope? Next time, consider using one or two to avoid a nasty situation. You can't do much when you're dead, after all!