When Cole Bradburn learned that he and his wife Casey were expecting their first child, he knew exactly what he wanted to do.

"I'd always had the idea for a video game-themed room," Cole told Polygon in a recent interview. "But I didn't know if Casey would be on board."

Lucky for him and his unborn son, Casey was amenable, so Cole teamed up with his friend Wes Swain to create a nursery based on his favorite video game series, The Legend of Zelda.

Almost as soon as he published a video of the final product on his website last week, it began to attract attention from all corners of the internet - including several people who wanted to translate the Hylian script beneath the Master Sword. But the soon-to-be-famous project began modestly between two friends several months ago.

He and Wes, who had previously created a Yoshi's Island-themed nursery for his daughter, began by spitballing ideas. In those early stages, when they were still mocking everything up in Photoshop, they estimated that the project would only take a couple of weeks - 50 or 60 hours, at most - but even the best laid plans have a way of expanding.

"Truth be told, it was probably two weeks before any of the acrylic paint got on the wall," Cole said.

The delay wasn't for lack of effort. They began by tacking strings from ceiling to floor, creating a grid to fill in the sections they'd mocked up in the planning phase. Cole handled painting the base coats, and Wes sketched the outlines of Hylian legend by hand and eventually painted in details like shadows and highlights.

For the next several weeks, the duo worked nights and weekends as progresses inched ahead. "Some days, we'd come in and leave after many hours, and it wouldn't look any different except for one or two small details," Cole said. But it was those details that helped make the project so meaningful. As man-hours swelled to multiples beyond their initial guesses, they were occasionally frustrated by the plodding progress. But they resolved to make the nursery as perfect as possible.

"Being able to take this thing out of your head and go through a lot of hard work and have it come out into the world is a pretty amazing thing," he said. "I think that was the best part when it looks better that what you thought it would look like."

Three months, 150 hours and about $500 in supplies (mostly investments in paint) later, and the Legend of Zelda-themed nursery was complete. His son would have the room that Cole had always dreamed of. 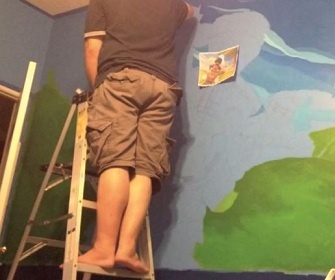 "I like things that I devote time on to have meaning," Cole said, and the nursery imbues much more meaning to him than the paint that appears on its surface. Each mural speaks to the values that he cherishes and wants to impart to his son.

Cole told Polygon that he and Casey are "pretty adventurous people," and their love of adventure - particularly scuba diving and surfing - informed his decision to chose the cel-shaded Wind Waker and Spirit Tracksinterpretations of the Zelda universe.

In a nod to previous generations, he featured the Spirit Train prominently because the boys in Cole's family all had a "thing for trains."

"Even if you're one kid out on an adventure, you can make a huge difference, and it's important for the kid to feel empowered to chase after whatever it is they want," Cole said.

In an article on his website called "The Lessons of Zelda," Cole writes about the values he learned from Zelda games, among them "full hearts = full life" and "mow some grass if you are short on money."

That last lesson holds particular sway with him.

"It's a game. You're playing a game to have fun. But you're doing this tedious thing. When you dig down, it is the same kind of thing as life," he said. "Sometimes you have to grind though you don't want to."

Cole calls video games "an escape without being escapism," and that's an apt description of what the Zelda nursery project was for him, too. Being an expectant father is full of anticipation, and as he worked on the nursery, the project redirected his nervous energy into something productive. As the July 6th due date inches ever closer, the anticipation has begun to assert itself again.

And then there were three

"Now that the project's over, I have nothing to occupy that few hours at the end of the day with," he said with a chuckle.

Though he looks forward to rediscovering Zelda games with his son, he's already imagined the possibility that it just won't take.

"It'd be a tragedy if he doesn't like Zelda, but that's what happens," he said. "Kids don't necessarily like what their parents do, and I'm completely cool with that.

"He'll still like the room, whether he likes Zelda or not."

For Cole and Casey, video games are just one part of life, and he thinks we'll see more of this kind of creativity as generations who grew up gaming begin to have kids of their own.

"All the game stuff is going to be in balance with the rest of life," he said. "Our whole lives are definitely not even close to being focused on games.

"But rather than having a Disney bedroom or a Winnie the Pooh bedroom - I mean, come on!" 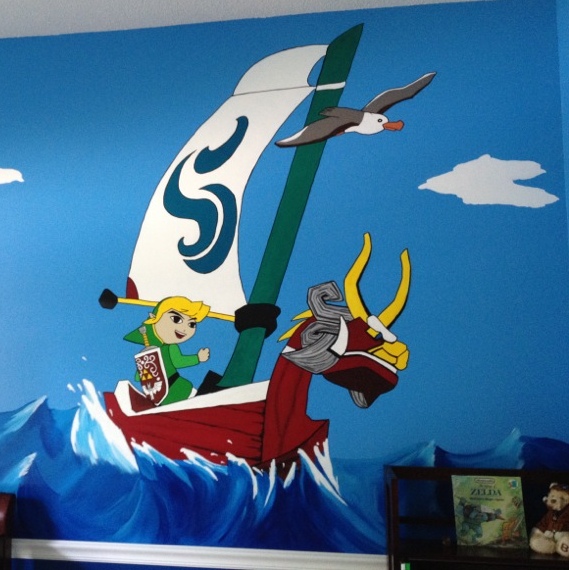