Theatrhythm Final Fantasy is more than just a rhythm game based on a long-running series of RPGs; it's a love letter to our most powerful memories of those games.

And it works. With a track list over 40 songs deep and a strong progression mechanic inspired by traditional Final Fantasy games, Theatrhythmtugs on nostalgia without relying on nostalgia alone. It recalls the most beloved and despised moments of 25 years of Final Fantasy games with a background harmony of challenging screen tapping and party development that will make RPG fanatics feel right at home. 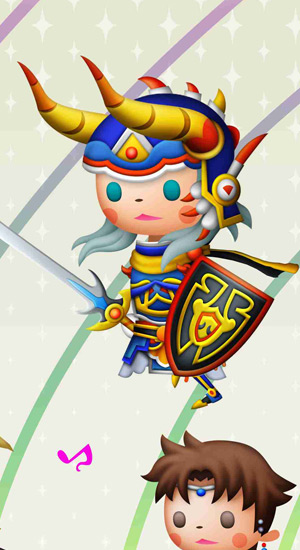 Like many of Final Fantasy's best tunes, Theatrhythm starts simply. Players can pick one of the 13 proper Final Fantasy releases from the series and tap along to three main tracks and two book-ends from the game of choice. Your interaction with the music is limited to a handful of actions - quick single taps, holding the stylus down for elongated notes, and swipes in a single direction. An HP bar rests in the upper right corner of the screen, and every note you miss knocks away a portion of your life. Lose it all before a song is done, and it's "game over."

From the bombast of Final Fantasy VII's "One-Winged Angel" to Final Fantasy IV'sslow, beautiful "Theme of Love," Square-Enix and developer indieszero have picked out the best compilation of tracks from the series I could have hoped for. Theatrhythm Final Fantasy's few duds come from games that have been forgotten for good reason - I'm looking at you, Final Fantasy II.

Despite its huge selection, Theatrhythm passes over a few obvious choices. Final Fantasy X-2, XIII-2, and any side games are absent, as is Final Fantasy XIV - which actually features some great music despite its poor reception. The Japanese release ofTheatrhythm has been expanded with downloadable content, so it's possible these gaps will be filled eventually.

Musical challenges are split into three modes that represent the three primary gameplay elements from Final Fantasy - field music (for exploration), battle music (for combat), and event music (for cutscenes). Each mode has its own wrinkles, such as having to slide the stylus up and down during held notes in field music, but you'll be performing those same three basic maneuvers throughout the whole of Theatrhythm Final Fantasy.

Theatrhythm surprises with its almost self-deprecating sense of humor, a rarity for Square-Enix. There's a playful, colorful style at work - characters and monsters from Final Fantasy's history are reinterpreted in goofy Flash game aesthetic that grew on me as I played.

Before every stage, characters string together nonsensical randomly generated phrases that poke fun at the melodrama and inflated self-serious tones of Final Fantasy dialogue. My favorite? "And now, we'll finish it momentarily in time." Sounds like it could have come right out of the mouth of the tortured hero of a badly-translated PlayStation-era Final Fantasy game. 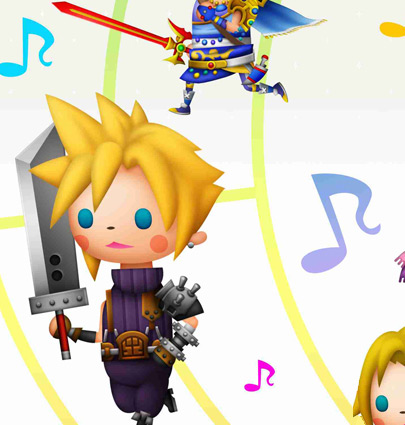 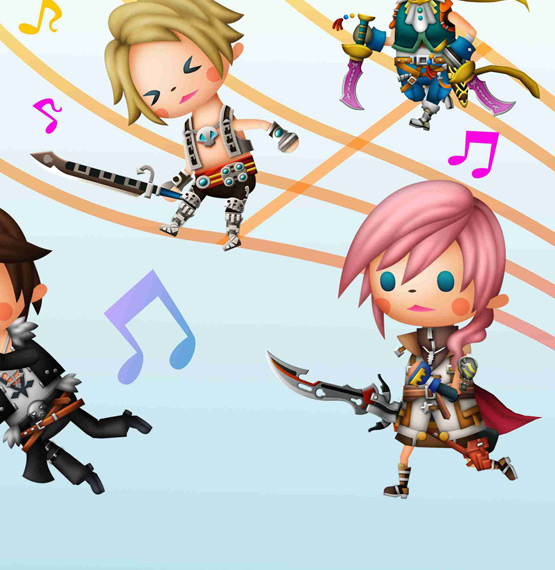 But Theatrhythm Final Fantasy has more going on than dumb jokes and silly visuals. The party management system adds layers of complexity between musical stages. A party is made up of four protagonists from any of the 13 main Final Fantasy games (plus some bonus unlockable characters later on). Each song that you complete successfully earns your group experience points and items. As your characters level up, their stats improve and they learn new skills that provide you with more hit points and a higher chance of being able to survive more difficult songs.

The tactical party planning has just enough impact on individual songs to matter without overwhelming the rhythm or making skill seem less important. For example, I chose Terra from Final Fantasy VI as my lead character. Her Cure and Pray abilities kept the party alive as I attempted higher-difficulty versions ofTheatrhythm's playlist. Squall from Final Fantasy VIII stood at the tail end of my group, loaded with abilities to improve my team's stats and weaken enemies during battle music stages.

You can play through the main group of 40-odd songs on basic difficulty without thinking about your party setup at all, but when it comes to the unlockable Chaos Shrine mode, you'll need to get strategic. In the Chaos Shrine, you unlock "Dark Notes," movements comprised of one field music stage and one battle music stage. Songs absent from the main game are introduced here, and songs that were in the main game are twisted into new, strange arrangements. Your goal is to not just survive to the end but to defeat bosses in the battle music that will drop rare items. Through Chaos Shrine mode, Theatrhythm loops into a catchy chorus of repeated battling and powering up.

Theatrhythm could have coasted by on the three to four hours that it takes to complete its main mode. Fans would have eaten up the excuse to revisit the franchise's great discography. But the added depth and difficulty of the Chaos Shrine mode provesTheatrhythm Final Fantasy's worth on its own terms. Hunting down different bosses and conquering dark notes will keep even the most talented music game aficionados busy for a long time to come. 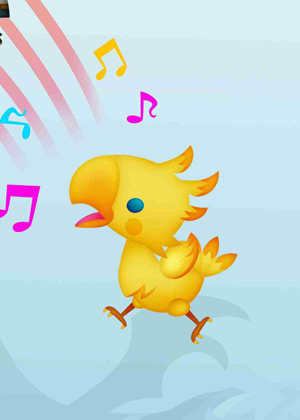 Theatrhythm Final Fantasy is one of the smartest games Square has released in the FF line in some time. It pulls players in right away but hides a great amount of depth and bonus content. It pays reverence to the past but tries something new and isn't above making a joke or two at its own expense. I have a lot of great memories of Final Fantasy that Theatrhythm brought to mind, but judging by recent releases, Final Fantasy could stand to start hitting some of the notes that Theatrhythm plays so beautifully.