Costumes, mushrooms and touch controls helped Namco find a niche for Tekken on Nintendo's new console — while trying to stop short of making a "casual" game.

Katsuhiro Harada isn't ignorant, but he once shared a feeling normally associated with critical, cynical gamers: that Nintendo just wanted casual games on its systems.

Unlike many, he didn't mean it as a punchline, but rather as a guide for how to shape his next game. "We still weren't sure what the Nintendo audience was going to be like," he says, referring to when his team started work on Wii U. "At first, we were aiming towards a simplified version of Tekken — taking a lot of elements from the arcade version and streamlining them for a casual fan base.

"Nintendo's reaction was that it wanted us to keep the hardcore elements that make Tekken what it is. We were quite surprised."

As a result, little about Tekken Tag Tournament 2: Wii U Edition's core game is casual; it's visually and technically identical to the Xbox 360 and PlayStation 3 versions released in September. Look beyond the core game, however, and you'll find features that inch away from Tekken's serious roots — such as the ability to dress up as Nintendo characters, touch screen controls, the return of Tekken Ball and a mode where you collect magic mushrooms. Because, Harada says, it just felt right.

If you played fighting games in 2003, you almost certainly noticed Namco's "guest characters" in SoulCalibur 2 — and on GameCube, that meant Legend of Zelda hero Link swung his sword with the SoulCalibur cast. This relatively simple bonus turned the GameCube version into the game's most popular port. In subsequent years, Mario characters appeared in EA's NBA Street Vol. 3 and SSX On Tour, making for something of a trend.

Until recently, though, those moments were isolated to the GameCube generation. And now on Wii U, history only sort of repeats itself. In the Wii U version of Scribblenauts Unlimited, players can generate Mario and Zelda characters to help solve puzzles. And in the Wii U version of Tekken Tag 2, Mario and Link aren't playable directly, but show up (along with other Nintendo characters from Star Fox, Metroid and F-Zero) as bonus costumes for the game's fighters.

"Originally, we had planned for many different items, like the variety of things you see in Mario Kart."

Like alternate costumes in most games, they're meant to be playful — letting players see the corpulent Bob dressed as Mario (nose and mustache included), or boxing dinosaur Alex wearing Bowser's shell and mane. And you surely haven't lived until you get a glimpse of Panda wearing Princess Peach's dress.

Adding something new — and arguably the game's most "casual" feature — Wii U Edition also features a Mario-themed Mushroom Battle mode. In it, existing stages from Tekken Tag 2 find themselves overrun with various mushrooms and stars from Mario's games. 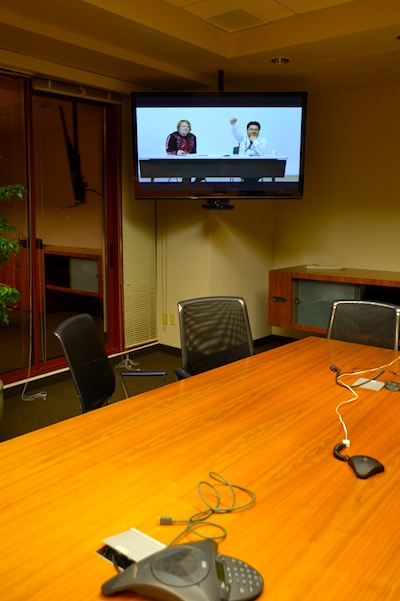 The teleconference setup at Namco Bandai's San Jose, CA office where we conducted this interview, with translator/designer Michael Murray on the left and Tekken series director Katsuhiro Harada on the right 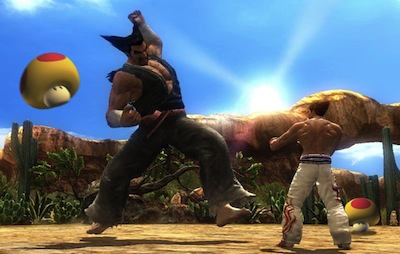 Matches in Mushroom Battle start like any other, but once the power-ups start sliding and bouncing in, Tekken's technical aspects fade in favor of the madcap: poisoned mushrooms make characters pint-sized, mega mushrooms turn them into Goliaths and stars make them invulnerable. All the while, players must deal with situations like trying to hit an opponent the size of an action figure or stay out of the way of a gigantic foot.

The stages also feature different patterns, such as items being pulled in by the fishermen sitting on the sides of the deck in the boat stage, or clumps of poisoned mushrooms surrounding single stars in one of the cave stages. All in the spirit of craziness, designed to appeal to Nintendo fans. Though as Harada tells it, initially the development team wanted to take the idea a lot further, inspired by another popular Nintendo franchise.

"Originally," says Harada, "we had planned for many different items, like the variety of things you see in Mario Kart. But Nintendo said that's a bit too much to have all of those items in there."

The iron fist and the iron curtain 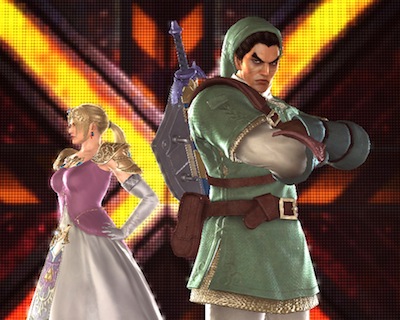 Though Tekken Tag 2 gets a small dose of Nintendo whimsy, there's something interesting about working with Nintendo and using their characters, even with small stuff, says Harada. And especially when it's for a game that is fairly removed from the company's typical all-ages spectrum.

Nintendo systems haven't been equated with fighting games for some time — it was often rival consoles that made better homes for the genre after the 16-bit era. That was definitely the case with Tekken, which stayed with the PlayStation family partly because of similarities between the arcade and home hardware. And until recently, the only Tekken game for a Nintendo system was a forgettable Game Boy Advance title. When the video game market began expanding, the iron fist of Tekken finally reached out.

"It wasn't really until Tekken 6 where we started to release on other consoles such as Xbox 360," says Harada. "We saw more requests from fans that they wanted to have the game on different systems, and we wanted to comply with that."

That eventually led to Tekken 3D: Prime Edition, an original installment of the series for Nintendo 3DS released last year. For a then-new system that needed third-party support, Nintendo apparently appreciated Namco's effort. "We really strengthened our working relationship with Nintendo, and we became really close at that point," Harada says.

On the topic of what day-to-day dealings with Nintendo are like, Harada says, "It's not like [Yoshinori] Ono-san from Capcom where he just kind of comes and goes as he pleases, and makes his own desk," jokingly referring to the developers' relationship in making (and promoting) Street Fighter X Tekken. Instead, Nintendo was more by-the-book. "It's mainly a relationship where we deal with them over email frequently," says Harada, "But the important points we need to discuss regarding game features and such are always done in meetings with them directly."

"We really strengthened our working relationship with Nintendo, and we became really close at that point."

For the record, Harada's team barely heard from Nintendo creative lead Shigeru Miyamoto. "With Nintendo, as with other franchises besides Mario, [one] person has the creative control and the final say, and for Mario that's Miyamoto," he says. "So indirectly we had some interaction there, but because on both sides we have pretty busy schedules, it was more convenient and efficient at the time to go through their person in charge, and he was the one who checked [everything] with Miyamoto."

Though the initial discussions regarded borrowing audiovisual elements for Mushroom Battle mode, Nintendo also offered design suggestions, like the aforementioned scaled-down item variety. Harada added that only later in the process of crafting Mushroom Battle were the character costumes considered. "We came up with the idea of, 'Well, if we could take the Tekken characters and dress them up more like Nintendo characters, that would make it even more funny and comical.'" 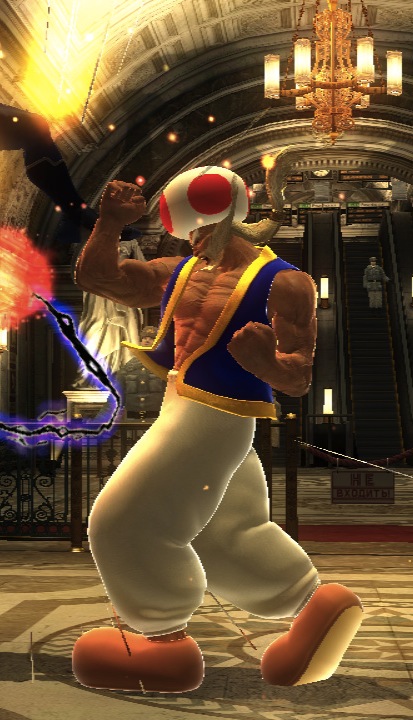 By now, a large part of making a game for a Nintendo console is making a game for its controller. Fortunately, the tablet-like Wii U GamePad has all the buttons that a Tekken game needs. "However," says Harada, "for more advanced players who are used to the game, it might take some time to get used to it, because whether you're playing with a stick or a normal controller like on 360 or PS3, your hands are closer.

Tekken Tag 2 also supports the Wii U's Pro and Classic Controllers, as well as a new Tekken Tag 2-branded joystick from Hori, for those wanting traditional controls. But using those bypasses the game's touch screen bonuses.

The GamePad's touch screen offers a feature that Tekken and other fighting games have been using on the 3DS — the ability to quickly perform special moves by tapping them as they appear on the screen. Harada says that the touch commands are there mainly to enable beginners to perform moves at will. "But it's different than Street Fighter," he says. "For example, you might know that the 3DS version of Street Fighter 4 has that touch option, but when you touch the button you're able to perform the move regardless of what position your character's in, regardless of how long it would take to input that command normally. However, in Tekken that's not the case ... you can only perform that technique if the circumstances would allow you to perform it normally."

This brings into question the nature of such shortcuts in fighting games, and whether or not fighting game purists would ever give touch controls a fair shake — not as the only way, but even as a tool. "There are actually some moves where it's better for advanced players to input the commands themselves because it might be quicker or it might be a better version of the move," Harada says, "so it's not like the hardcore's going to shun it saying it's cheap, I don't think." He further cites players using triggers and bumper buttons on controllers to assist in pulling off moves more consistently, much in same way that touch screen commands are used.

Following Tekken 3D: Prime Edition, Harada says, Nintendo and Namco Bandai established a firm bond. So much so, in fact, that Namco is now helping develop the next Smash Bros. for Nintendo on Wii U and 3DS. Harada says that deal didn't have much to do with the Wii U bonuses in Tekken Tag 2, but that he thinks the 3DS game in particular helped gain Nintendo's trust. Perhaps notable, given its casual slant.

"It seems that the motivation behind [Tekken and Smash Bros. players] is not as different as I initially thought."

Smash Bros. is a popular series, but its merit as a fighting game has been debated for as long as it's existed. Regardless, a burgeoning player community has given it legitimacy, with organized tournaments and hard-and-fast rules that have nurtured a cadre of pro players comparable to the best in Tekken or any other so-called "serious" fighting game. And you don't need to tell Harada that — at least not anymore. 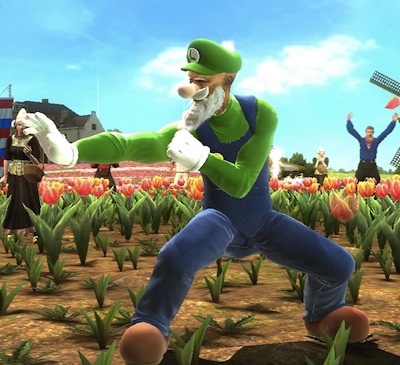 Harada says no money exchanged hands between Namco Bandai and Nintendo to get the Nintendo costumes and items in Tekken Tag Tournament 2: Wii U Edition. 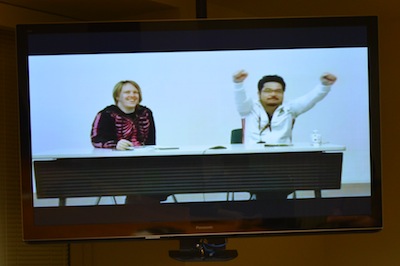 "It seems that the motivation behind the players in those core groups is not as different as I initially thought," he says, "I came to this conclusion after seeing them in tournaments, and also after playing Smash Bros. more myself and also looking at YouTube videos — I began to see a lot of similarities. So I think if each community surrounding Tekken, Street Fighter and Smash Bros. could look more open-mindedly at each other's games, you might find that there's a lot more similarities and a lot that you'd enjoy about the game, and that can be said for all sides."