A look at the Philadelphia playground of Polygon's editor-in-chief

I live in the Fishtown neighborhood of Philadelphia, far from the video game journalism industry in San Francisco and less far from the media industry in New York City. It's here, in the converted remains of an old brass bed factory, overlooking the city's Market-Frankford El, that I do my gaming.

I prefer to play early in the morning, around 7:30 a.m. before making the long commute upstairs to my home office, where I punch the clock around 9. Often, this is the only gaming time I get each day and I always look forward to it. A resolute "morning person," I'm at my most energetic first thing in the morning. While others may dedicate that energy to things like "exercise," I choose to dedicate it to video games. After work — if I'm not tasked with errands, procuring food or socializing — I find that I'm simply too tired to properly enjoy a game the way I can in the morning.

So it's on the couch — a classic Scandinavian mid-century piece that I inherited from my mother — with a hoodie pulled up to better focus my brainwaves, a cat on my lap and a cup of coffee and/or tea on the table, that I begin my "work" day.

Are you a collector, developer or super fan with a collection worth sharing on Playgrounds (read: unlike mine)? Let us know at playgrounds@polygon.com! 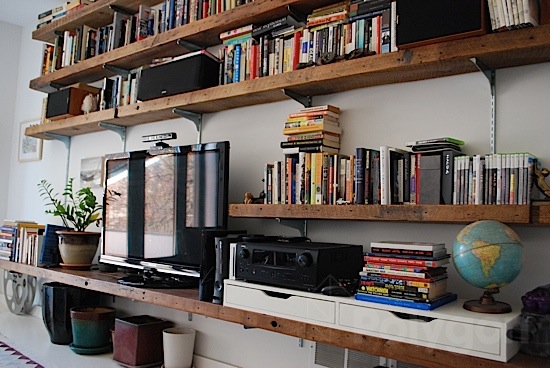 My partner Erin and I built our house together. While we didn't do all of the (literal) heavy lifting, we bookended the project from demolition and design to finishes like painting, flooring and tiling. These shelves are made from Civil War-era floor joists, with two biscuited together to form the deeper bottom shelf. It holds the only TV in the house — a 46" Panasonic Viera G10 plasma — and my consoles. Oh, also some books. 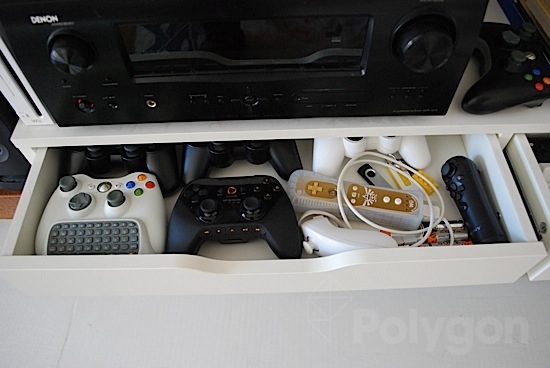 I'm embarrassed to admit how long I hunted for this set of drawers. Well, not this specific set, but a pair of drawers to serve this function. Game controllers are a mess, it's a fact of life, so I've hidden them in this two-drawer cabinet from Ikea. The clearance on a controller's analog sticks is so close, it almost seems designed for this use. Speaking of input, I also use a Logitech Harmony One. Not pictured: My collection of six (!) PlayStation Move controllers.

The other drawer has four Wiimotes, an Xbox mic and remotes 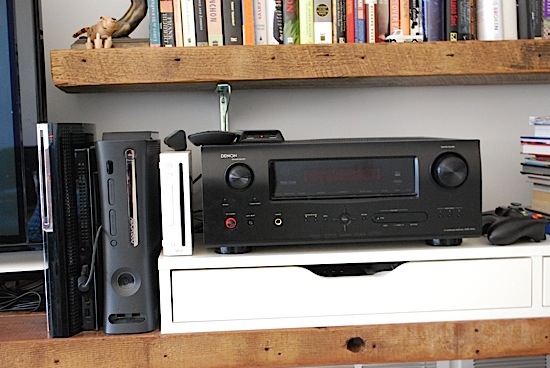 You're looking at a vintage 60 GB launch PlayStation 3 (the kind that still plays PS2 games), a 120 GB original Xbox 360 Elite (from 2007, and "repaired" twice) and a launch Wii. I do most of my gaming on the Xbox and the hard drive has been nearing its maximum capacity seemingly for years, but if I can just hold out one more year ...

The receiver is a Denon AVR-1910 and I can't quite remember why I chose it. It does a great job of up-rezzing everything to a single HDMI-out and has an optical passthrough for a fancy gaming headset I don't have. Note, no cable box. #cordcutter 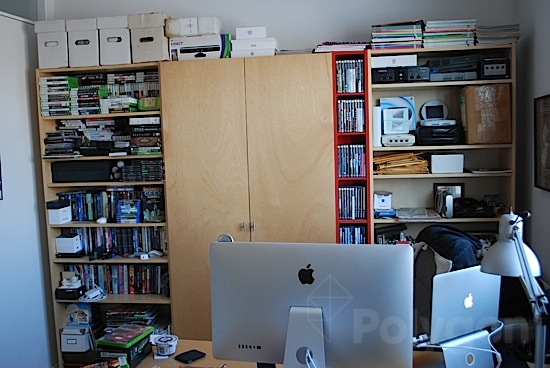 Alright, you got me. I don't do much playing at all in the office, but I do store a lot of my play things in here. The sad truth is that video games don't look nice on a shelf, the way books do. My theory is that book bindings — with their seemingly infinite combination of dimensions, colors, fonts and materials — create a really beautiful landscape, while video games — like DVDs, CDs, etc. — just don't. Behind my desk is a series of shelves with almost no organizational rubric. It's a mess.

No, that MacBook Air isn't a gaming machine 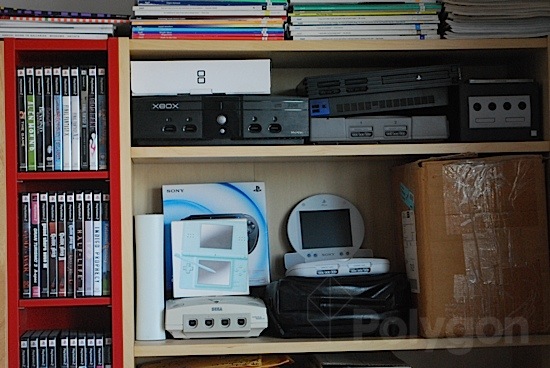 Like many thirty-somethings, I unloaded generation after generation of video game consoles so I could afford the next big one. This culminated in a 9/9/99 purging of nearly every video game-related object I owned short of the PlayStation so I could pick up a Dreamcast and a stack of launch titles (Soul Calibur!). What remains is everything since then. One of these days, I'll give myself permission to indulge my inner hoarder and rebuild my childhood collection. Sega CD!

Not pictured: An Atari 2600 (née VCS) and Commodore 64, snagged from garage sales 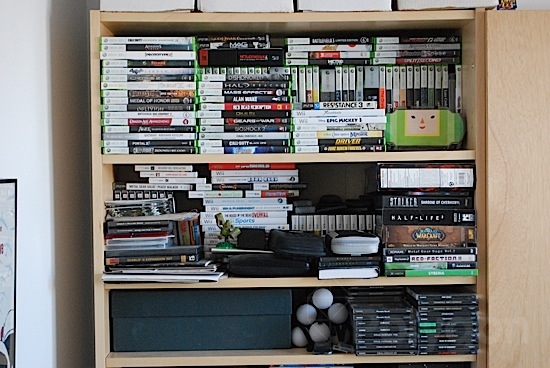 The thin, red shelf above holds older games from the PlayStation 2, GameCube and Xbox era. Everything else is on these shelves. My Xbox 360 games, PS3 games, Wii, DS, 3DS, PSP, Vita, even some GBA. There's a random assortment of PC games, PSone titles, Dreamcast games and more. Since I've never really invested any time in organizing my collection, it's a bit hard to find anything. C'est la vie.

There they are ... six Move controllers for Johann Sebastian Joust
Editor markup for Playgrounds – Chris Grant. This is only visible in the story editor.