Nintendo Land is the most magical place on the Wii U

Review and information for Nintendo Land

Nintendo Land proposes a Nintendo-themed amusement park so appealing and cynically monetizable, it's hard to believe one doesn't already exist in some warm-weather state.

Nintendo has done the next best thing, creating a virtual park, an homage to Disneyland. Instead of Mickey, there's Mario. The Magic Kingdom has gone Mushroom.

The publisher has captured the pleasures and displeasures of visiting an amusement park on a hot summer day. Just like Disneyland, not all attractions are created equal.

As with Disneyland, the first thing you see upon entering Nintendo Land is a sprawling plaza with spoked paths to the various amusements. It starts empty — we'll come back to this — but in time it fills with familiar characters, enormous statues, poppy music and crowds of Miis, populated from your friends list.

A hand-made aesthetic unifies a coterie of otherwise dissimilar characters and worlds from the Nintendoverse — ranging from the alien planets of Metroid to the fantastic kingdoms of Zelda. Nintendo Land's "Table of Elements" include plush, cotton, felt, corduroy and stained mahogany. Everything is soft, smooth and cuddleable, engulfing the world like a warm, heavy blanket. 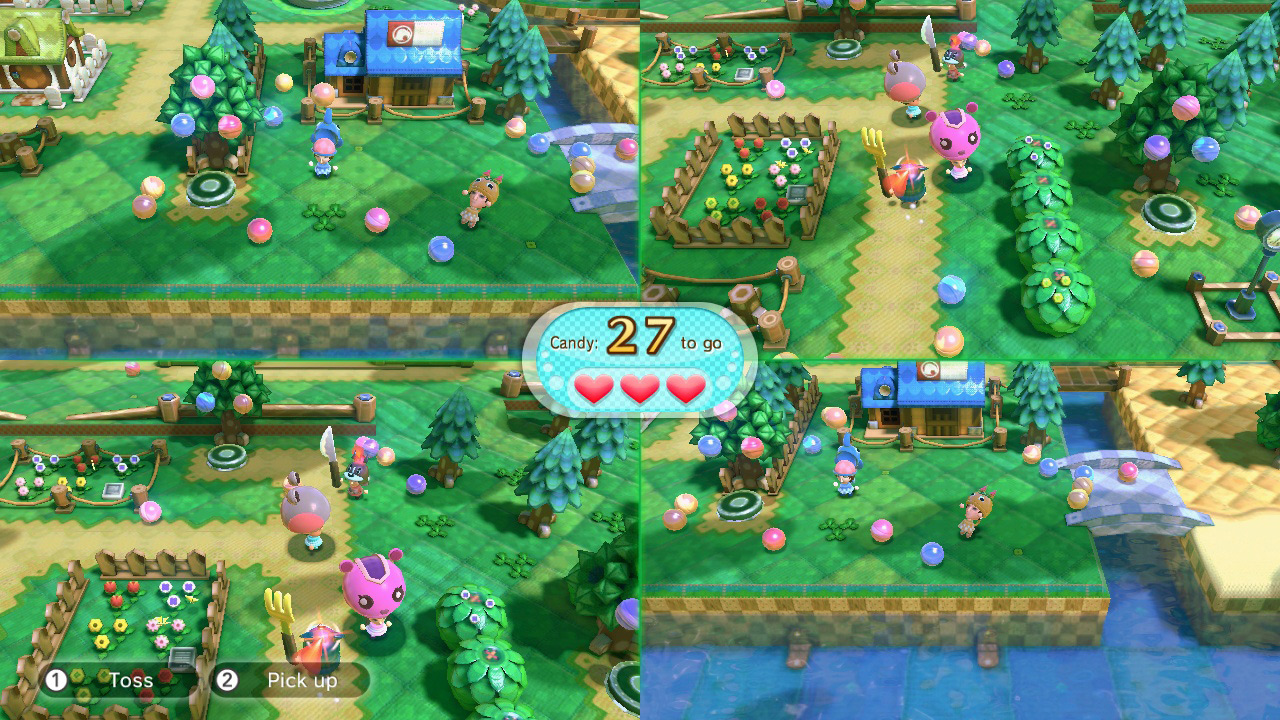 Don't assume the best characters have the best rides

The largest attractions in Nintendo Land are also the weakest. "The Legend of Zelda: Battle Quest," "Metroid Blast" and "Pikmin Adventure" aspire to be full-featured experiences, complete with campaigns, boss battles and multiplayer modes. But they're all too long and repetitive to be enjoyed as mini-games, and too simple and uninspired to be enjoyed as action games. None truly justify the GamePad. They ask the player to shoot at the screen or tap a target, a task easily accomplished with a WiiMote and Nunchuck.

I suspect cooperative play can work with the Wii U, but It doesn't in Nintendo Land

But the most troubling problem with these cooperative amusements is the disconnect between the GamePad player and the WiiMote players. In Nintendo Land's "story" mode, one player uses the GamePad, while up to four others use WiiMotes. My GamePad screen was my own world, and I needed to remind myself to work with my friends living on the television. It's like watching a movie on an iPad while your friends watch on a television: off putting, disorienting and counter-intuitive to local multiplayer gaming.

I suspect cooperative play can work with the Wii U. It doesn't in Nintendo Land.

Learn your way around

The collection of six single-player amusements are the best collection of attractions in Nintendo Land, and they're also the most essential. I've heard Solitaire was included in Windows to teach PC newcomers to use a mouse. These six games will teach you how to use a Wii U. 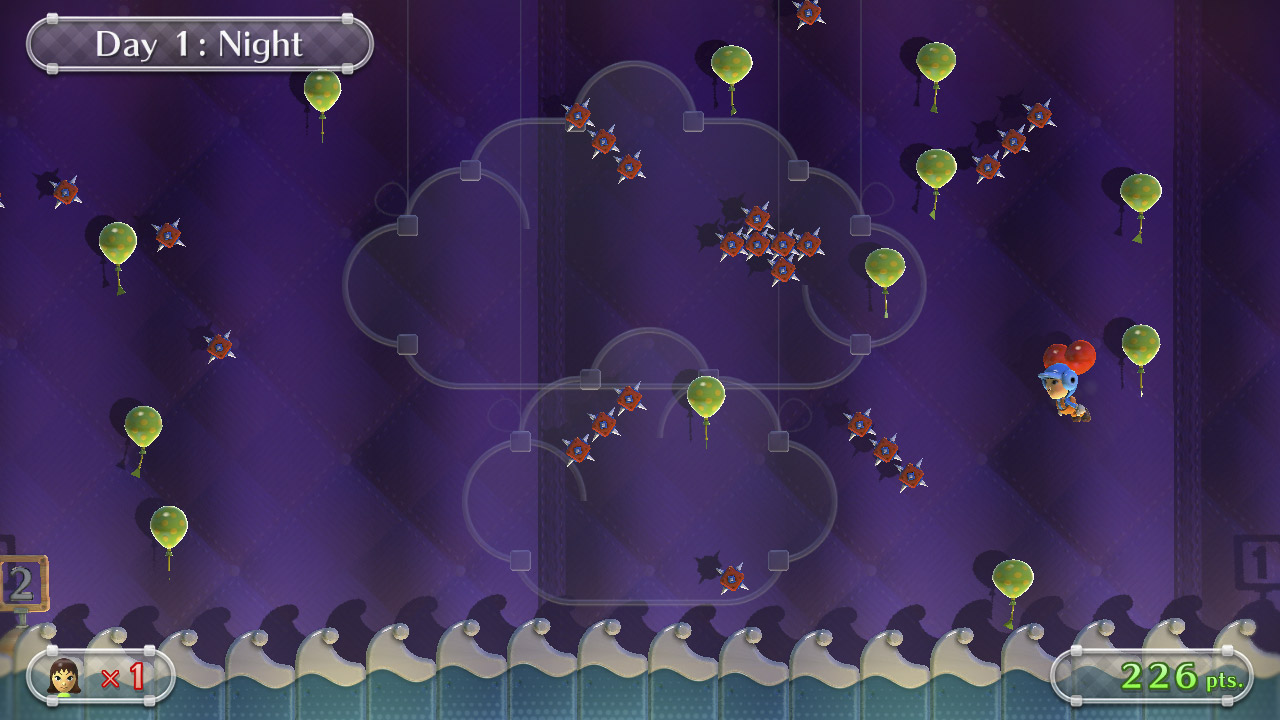 For example, in "Takamaru's Ninja Castle," you flick ninja stars off the GamePad screen and onto the television, striking enemies. While in "Yoshi's Fruit Cart," you draw lines on a map on the GamePad to guide Yoshi to a door on the television. The central mechanics of these games — simple tasks like rotating the joysticks or steering the gyroscope built into the GamePad — will teach you how to engage with the Wii U, how to read and react to its visual language and how to put to use its various capabilities.

These six single-player games stand up as more than learning tools. Odes to less appreciated Nintendo classics like Game & Watch and Balloon Fight have tight difficulty curves, and brutal fail states that send the reckless to the beginning ad nauseum. At first, I detested the difficulty curve, but after beating the games — and I use the word beaten purposefully — I felt the sort of high I got after conquering an NES game back in the day.

The competitive mini-games are Nintendo Land's Space Mountain, if you will, the rides most likely to bring visitors back. "Mario Chase" and "Luigi's Ghost Mansion," two amusements that take advantage of the previously mentioned disconnect between the GamePad player and the WiiMote players to good effect. In "Mario Chase," the GamePad user hides from the other players using the Gamepad, which shows the positions of their pursuers. In "Luigi's Ghost Mansion," the GamePad player is a ghost, invisible to players using the television. The ghost needs to scare their friends without getting spotted by their would-be victims' flashlights. 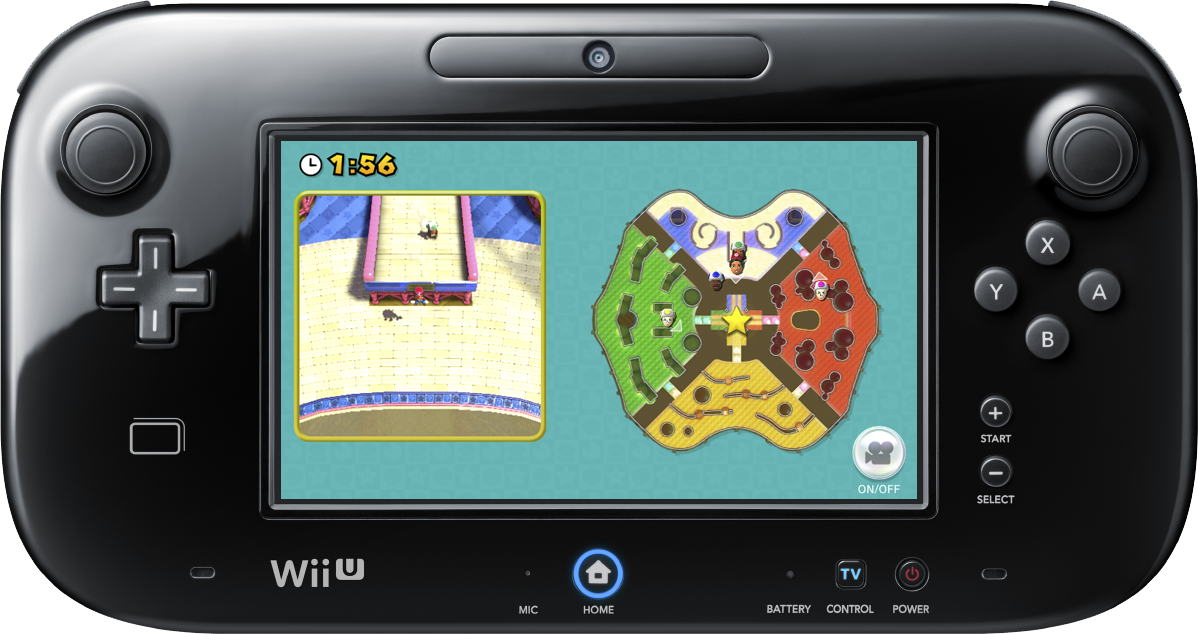 These two competitive games make the GamePad's disconnected experience into a strength. Both use that divide for competitive tension. It sets the party of friends on the television against the powerful jerk using the GamePad, and generates a particular sense of tension. I took as much pleasure conspiring with friends as I did staring alone into the glowing second screen. 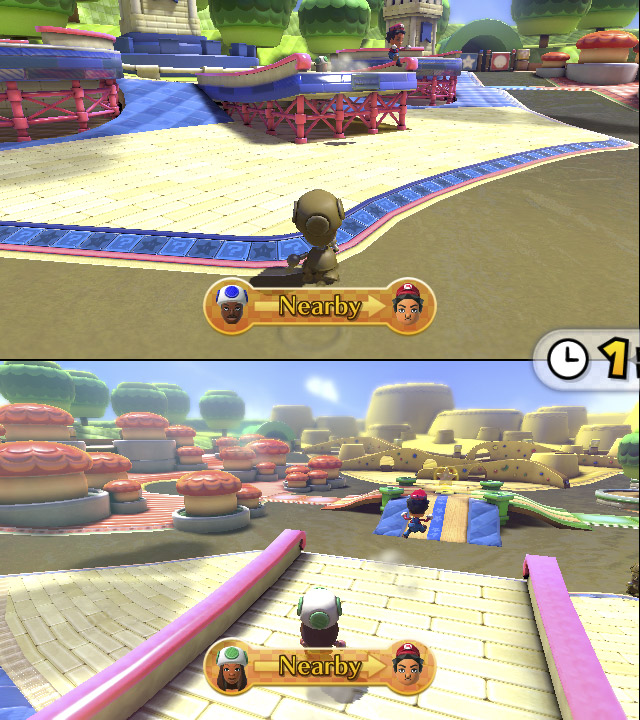 Have something to do while waiting in line

As in a real world amusement park, waiting in Nintendo Land sucks. Following a game's completion, you won't find a quick replay button. Attractions have the equivalent of long lines in the form of a superfluous amount of screens to be tabbed through to begin a session. Say you and four friends have finished a 30-second round of "Mario Chase." Once the ride is over, it's back to the beginning of the menu for all of you, even if all you wanted to do was ride again. In shorter amusements, the start-and-stop pace is a killjoy.

A park train, which carries multiple players through a gauntlet of mini-games for a predetermined amount of time (15 minutes, 30 minutes, so on), sort of alleviates the problem with Nintendo Land's variety, but ultimately, the loading and menu screens still slow things down.

As I mentioned before, Nintendo Land's plaza starts out empty. It's the player's responsibility to fill it with all the trappings of a spectacular amusement park by playing the Japanese equivalent of a rigged carnival game: pachinko.

Playing games in Nintendo Land rewards you with coins, which can be used as tokens in the plaza's 8-bit pachinko machine. The pachinko machine in turn yields presents, which contain all sorts of knick-knacks, like a jukebox and a button that changes the time of day. But mostly, the presents contain decorations, ornaments and statues honoring the characters and items from the land of Nintendo.

Earning points to construct the park lends a tangible sense of progress to the dozen games. The single-player balloon floating game and the multiplayer ghost capturing games and the cooperative alien blasting game have one universal purpose. Building a park felt silly at first, but I took a certain degree of pride in the final, monstrous, tacky layout. 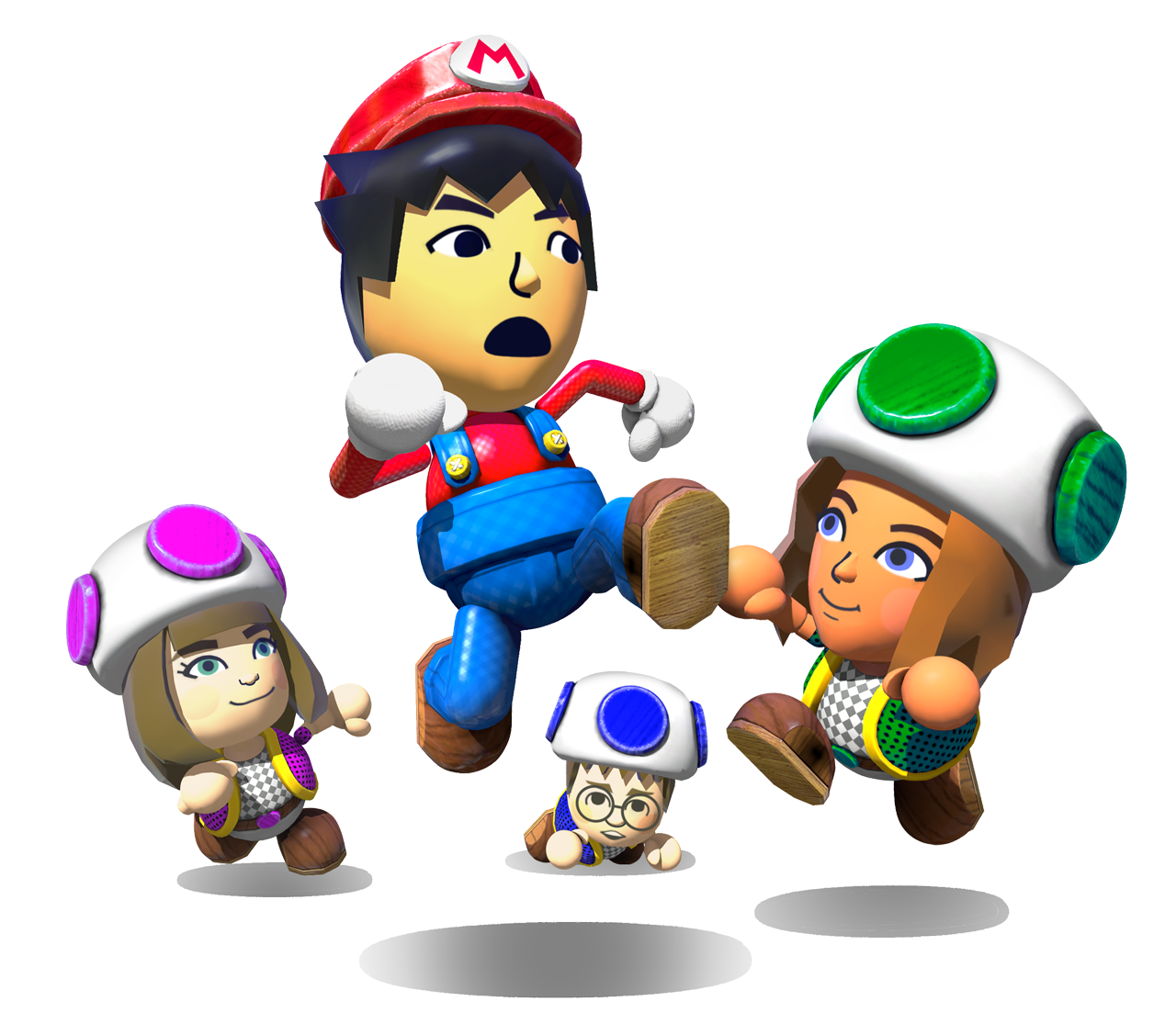 Nintendo Land is the most magical place on the Wii U

This final view of a trinket-covered Nintendo Land is a metaphor for the game. It's massive, but disposable; grotesque, yet striking; commodified, but affecting. Not everything in Nintendo Land works, but what it does well, no one else is even trying.

I played Nintendo Land surrounded by two dozen co-workers at Vox Media's video studio. Most had never heard of the Wii U, and were perplexed and a little put off by the GamePad controller. They'd apologize for walking in front of the TV only to realize I'd been lost in the tablet's screen for the past hour.

Most of them didn't understand how the game or the console worked until I booted "Luigi's Ghost Mansion." Suddenly, it clicked. Everyone was interested and enjoying themselves. They began talking about Nintendo and their favorite characters, and wondered what the hell this weird little machine was. They were in Nintendo Land, some of them for the first time in decades. It may not be the most magical place on Earth, but Nintendo Land is definitely the most magical place on the Wii U.

Nintendo Land was reviewed using a retail copy provided by Nintendo. You can find information about Polygon's ethics policy here, and see an explanation of Polygon's review process and scoring rubric here.

Our review of Nintendo Land 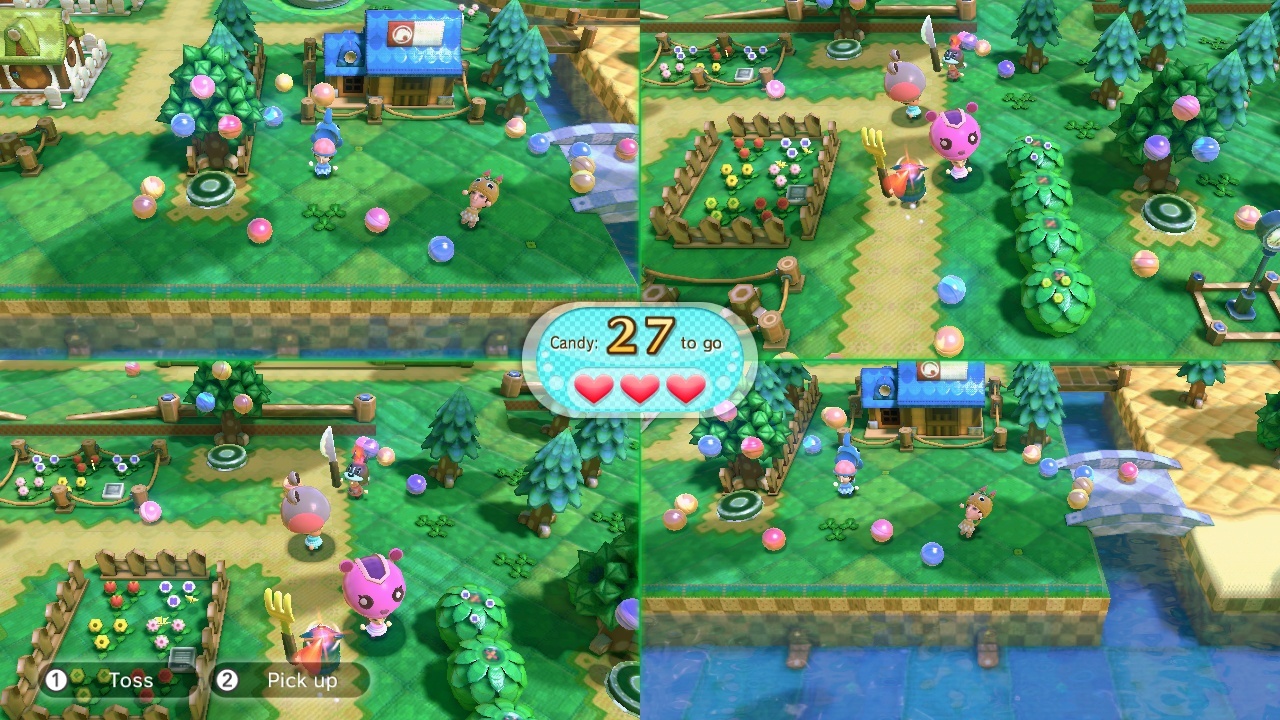