Warren Spector on Epic Mickey 2, developing for Wii U and making a better Marvel game

Share All sharing options for: Warren Spector on Epic Mickey 2, developing for Wii U and making a better Marvel game

Somewhere in Disney's archives of the abandoned and forgotten, the ideas that never made it to screen, there is a room containing rejected Tinker Bells. And it haunts Warren Spector's waking hours.

"While we were going through the archives we found all these rejected Tinker Bell designs," Spector told Polygon. "Like: oh my god. There's a gothic one from the '40s, a sexy nymph Tinker Bell, one that looks like a 1940s actress, all sorts of rejected Tinker Bells. I can't shake this idea of there being an area in Wasteland where a little enclave of bitter, resentful Tinker Bells live. But she's a major franchise now, so that's why I couldn't include it in Epic Mickey 2."

Spector also wanted to include an Alice in Wonderland-themed area, but at the time Tim Burton was making his live-action film. There are, however, 80 more years of Disney history for the team to plumb, so Spector isn't worried about running out of material.

Ten studios in six countries brought life to Epic Mickey 2, the newest entry in Junction Point's franchise featuring Disney's iconic mouse. U.K.-based Blitz worked on the PS3 and Xbox 360 versions, while Heavy Iron developed the Wii U version. Disney Europe translated the game — all dialogue, and the lyrics to all in-game musical numbers — into 17 different languages and 2 Advanced created the in-game U.I. In the center at Junction Point Studios were Epic Mickey creator Spector and studio head Paul Weaver, directing the team like a symphony out of Fantasia. 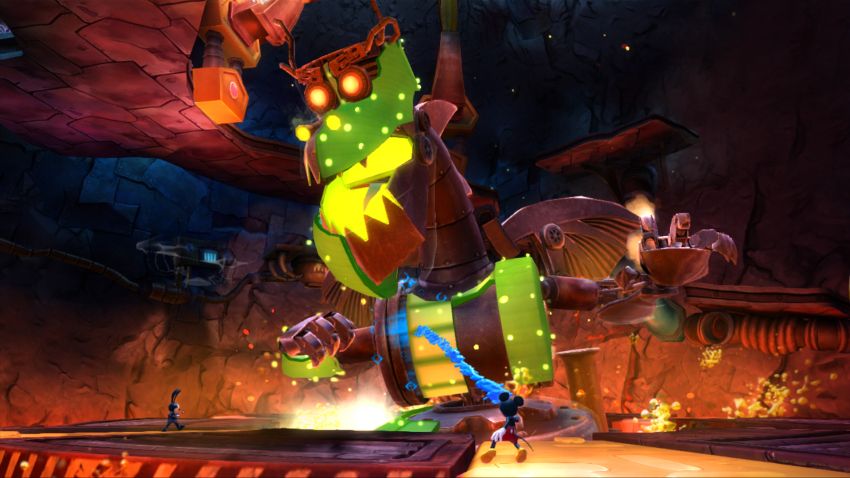 "It was like working with one big team," Spector said. "We felt like we had one big team. It didn't feel like a bunch of outsources, and then us. It felt like one team, just a lot bigger."

"The level of professionalism and trust allowed us to keep things running," added Junction Point studio director Paul Weaver. "We had people working in North America, Europe, China and Australia. The sun never set on Epic Mickey, and our IT department was on call 24 hours a day, literally. That level of trust allowed us to keep our information library open for them to use when they needed to."

For the Wii U version, Spector feels that the team has barely scratched the surface of the console's potential. Developer Heavy Iron joined the team earlier this year, giving the Wii U version a shorter development cycle than its counterparts.

"We looked at the features we wanted to do, then at how much we could do in the time we had available," he said. "We wanted to do something specific and unique for Wii U owners, since its big thing is Nintendo console owners are finally getting HD."

"Until someone smarter than me figures out how to walk and run and jump using a Kinect that isn't totally stupid, you can't make a free-form exploration game."

The PS3 version supports PlayStation Move, but Kinect controls are absent from the Xbox 360 version. Warren says the team discussed the possibility of full-body motion controls with Microsoft's peripheral, but couldn't find a configuration that worked in Epic Mickey's open environment.

"Until someone smarter than me figures out how to walk and run and jump using a Kinect that isn't totally stupid, you can't make a free-form exploration game," Spector said. "People use the Kinect for performance games, childlike action and puzzle games and rail shooters. It's really good for that. But I can't figure out to make it good for freely exploring a 3D space. There are lots of intelligent people in the industry, but someone has to figure that out.

"We thought about adding different modes, like a mini-game where you go into a building, play the Kinect game, then come out and pick up the controller," he added. "We didn't see the point, so we decided not to bother."

As for an HD version of Epic Mickey, Spector says the project is not getting greenlit, though he would like to see the first game make it to other consoles. 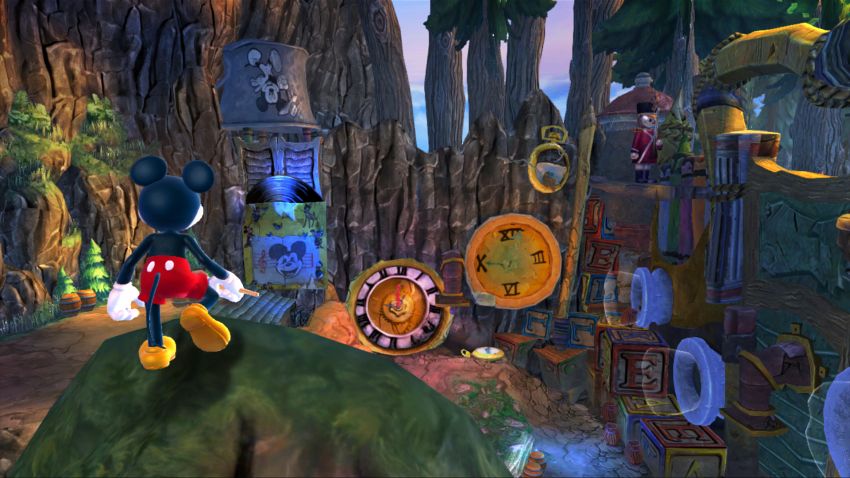 Recently Disney Interactive began shifting its focus towards mobile and social titles, with Junction Point and Avalanche' Software's "Toy Box" project remaining in the console development sector. Multi-screen gaming, like Nintendo's Wii U and Microsoft's SmartGlass application, provides developers with unique opportunities that Spector would like to explore.

"There's a reason something is worth moving from one medium to another."

Spector is also itching to make a Marvel game, citing a lifelong love of the company's comics and experience writing for its characters.

"I want to make an Iron Man or Fantastic Four game," he said excitedly. "I don't think anyone has done Marvel right yet. Everyone thinks that a superhero game should be about destroying things, flying, breaking walls, picking up and throwing tanks. But that's not what makes Marvel superheroes interesting.

"If you make a Marvel game and it's about beating stuff up, you've missed the point," he added.

Console or mobile, Spector seems to have cracked the formula for making licensed games that are loyal to their source material without sacrificing enjoyability.

"When you're doing a licensed game, you have one obligation — other than making it fun, which is meaningless; every game has to do that," he said. "You have an obligation to give an audience what they expect. There's a reason something is worth moving from one medium to another. You have to find the essence of that thing and deliver it in a way that is meaningful to your medium."