Share All sharing options for: Hitman: Absolution review: the man comes around

Review and information for Hitman: Absolution

A lot has happened between the release of Hitman: Blood Money and Hitman: Absolution.

Numerous stealth series have died and been reborn. The third person action-adventure spectacle has reached a peak and receded in a sea of me-too titles. Even developer IO Interactive has tried to reinvent itself with the crime-thriller inspired Kane and Lynch series, with limited success. But after six years and 2010's Kane and Lynch: Dog Days, IO has finally brought their bald hired killer back.

IO hasn't ignored the progression of time and game design in the interim. Hitman: Absolution is more forward, more cinematic, prettier than it's ever been. There's a new focus on story and presentation. But at its heart, Hitman: Absolution continues the tradition the previous Hitman games started, fulfilling the role of a more thoughtful action-puzzler.

The Hitman series has always been less about wanton violence than one would think, given the whole "predicated on murder-for-hire" thing. Sure, every Hitman title has allowed for emergent gameplay possibilities and a free hand in how you handle your contracts. But the metagame has always been about a perfect hit, ideally achieved without firing a single shot.

Hitman: Absolution continues this tradition. It's as much a puzzle game as it is an action title, as you explore each environment figuring out where you can go, what you can do, what accidents you can cause, and where you can hide the bodies. It's one of the few games where restarting a level when you make a mistake makes sense — the most satisfying moments in Hitman: Absolution are found amidst a perfectly orchestrated series of events that result in the demise of your targets.

In a departure from Hitman: Blood Money's large sandbox levels, much of Hitman: Absolution is composed of longer levels broken into smaller sandboxes (though there are larger environments scattered throughout the game). These require you to find a way forward, often while eliminating targets along the way. 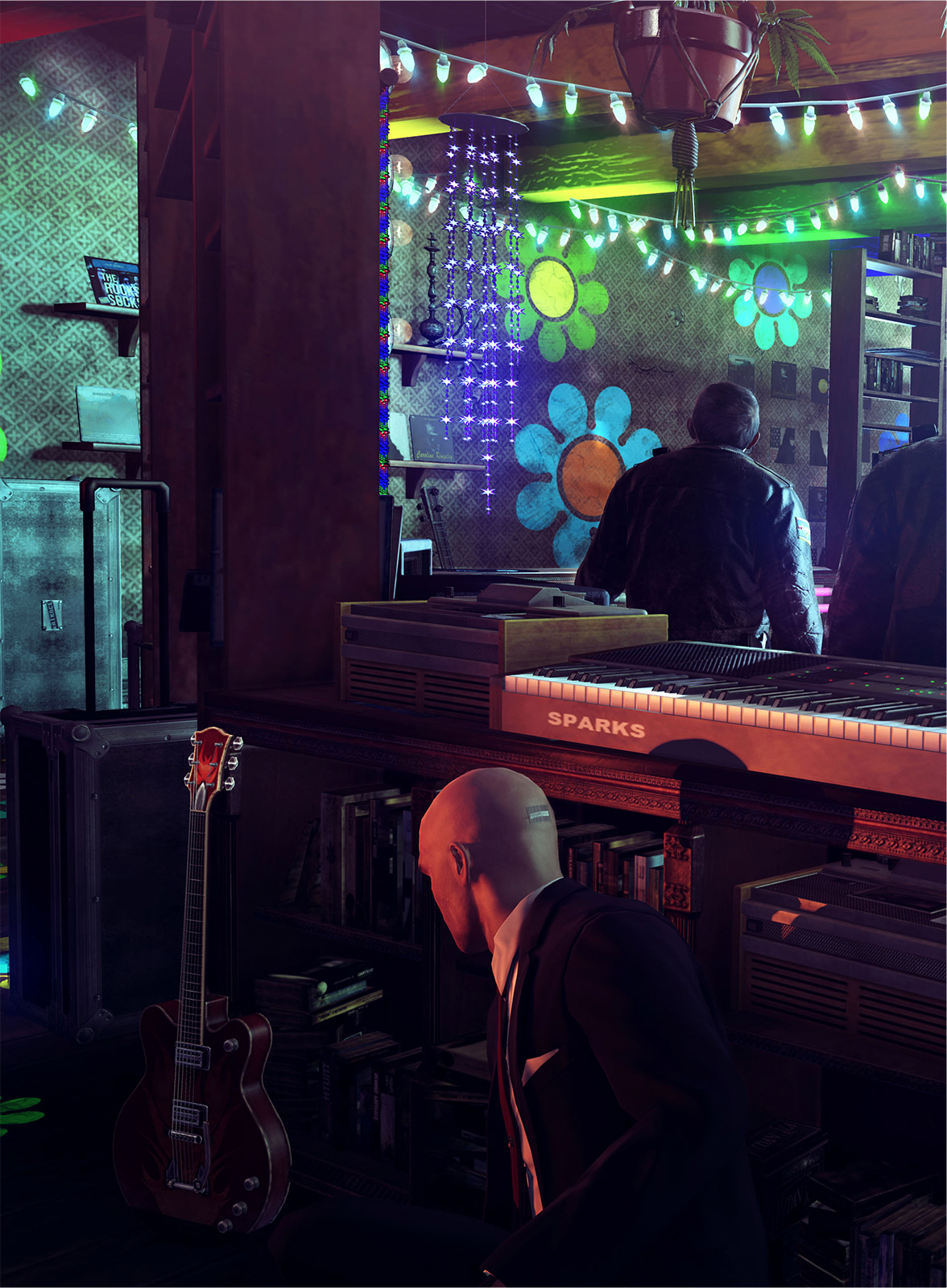 There's a constant sense of forward progress to Hitman: Absolution that the series hasn't seen in years. The need for stealth is still present — directly engaging groups of enemies might go well initially, but you'll be screwed proper if they call in backup and surround you. But it's much more point A to point B than it has been since Hitman 2: Silent Assassin. This makes sense, since it marks the return of a narrative purpose for Agent 47's activities. 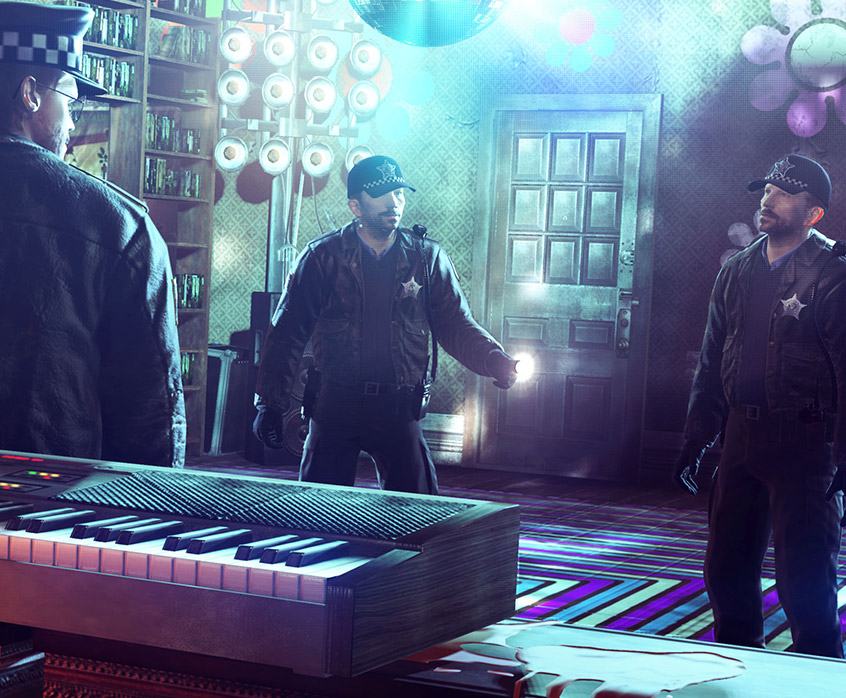 Hitman: Absolution picks up some fuzzy amount of time after the end of Hitman: Blood Money. After catching a contract to eliminate an old acquaintance, 47 is caught up in a bizarre conspiracy involving the shadowy Agency that previously employed him, a South Dakota organized crime family, and a girl with a secret that both sides want. He'll need to kill a bizarre array of criminals, scientists, drug lords, and rival contract killers in his journey to set things right — or at least, as right as an assassin conceivably could.

Where previous games in the series have made 47's motivations financial or practical, Hitman: Absolution is driven by more violent, personal stakes. Absolution continues some of the over-the-top tone of ridiculous violence and satire that has come to define the series, which makes it hard to become emotionally invested. Still, Hitman: Absolution has a number of moments that managed to pull me out of silent assassin-seeking professionalism, with one well-done character moment in particular that drove me from merciful pity to red-tinged wrath with a single line of dialogue.

This is all part of a new emphasis on presentation, which leads to some moments that seem strange and alien to the series, when taken out of context. But Hitman: Absolution draws back from the quicktime event-oriented third person action school of game design before it tips over the line. IO has made 47 a much more capable character than he has been in past games. Hitman: Absolution is probably the first game in the series that could be said to play well, and it was the first Hitman game where I can't remember a moment where I felt like my cover was blown by the controls.

This is important. Hitman: Absolution is a much more active game than past installments, and IO has given you the tools to do work within that environment. 47's basic skill set should be familiar to fans of the series. A fiber-wire garrote can still be used for silent kills — though the process has been vastly simplified — and the iconic "silverballer" pistols are still present. 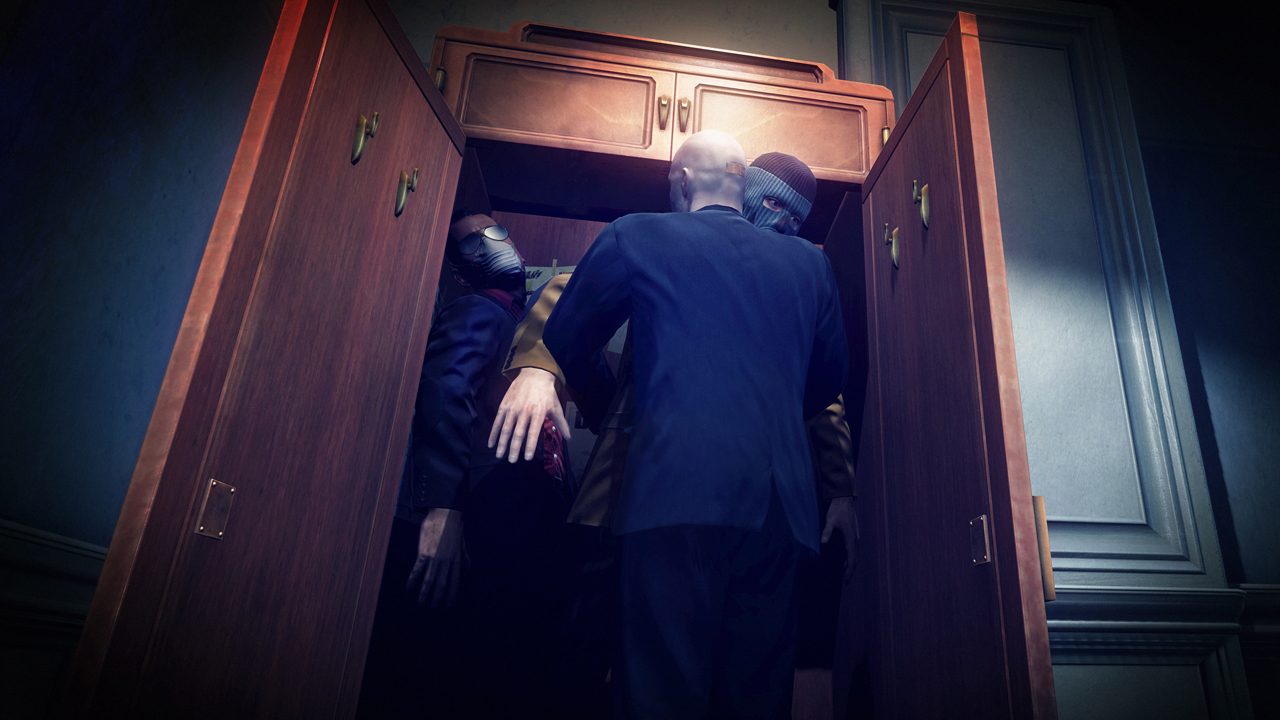 But IO has added numerous mechanics to Hitman: Absolution that make for more organic strategies. You can pick up objects and throw them to distract enemies and break them out of their patrol paths, and using a silenced pistol to create a distraction no longer invokes an end-mission score penalty.

Then there's the new Instinct mechanic. In part, this replaces the frighteningly well-informed map from previous Hitman games, as you can use instinct view to see objectives, NPCS and points of interest through walls and surfaces. Instinct also allows you to see the paths of NPCs in the environment and avoid them, but there's more to it than that.

Some new abilities drain your instinct meter. Disguises acquired around a level or by removing them from a subdued or murdered NPCs can still be used to access areas incognito. Avoiding the attention of enemies of the same "class" as your borrowed outfit requires instinct. Then there's "point-shooting," which freezes time and allows you to designate targets with your selected gun in exchange for some of your instinct reserve. Since instinct is only restored when you complete side and primary objectives, silently take out targets or hide in plain sight at specific parts of each level, there's a constant need to consider your strategy.

Score is front and center in Hitman: Absolution

This is particularly true on any of the three professional-tier difficulties, which remove heads-up display assistance and make your enemies more intelligent and more suspicious. And if you want the highest score, you'll want to be extra cautious. More than any previous Hitman title, score is front and center in Hitman: Absolution. I watched as it went up with completed objectives, and down when I was spotted. I knew triumph when I saw the ridiculous silent assassin score bonus, and was crushed when a slight misstep into a restricted area drained hundreds of thousands of points away. 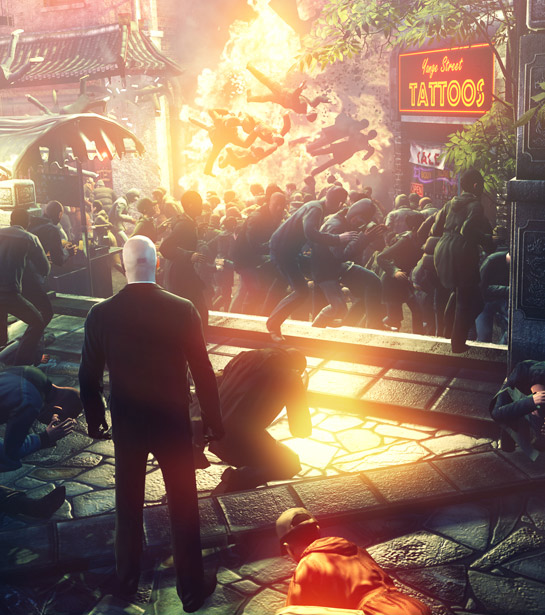 The only real problem with Hitman: Absolution is the same basic issue every game in the series has had — the need to replay sections again and again to get them right. While playing on normal difficulty or below will allow you to activate some mid-mission checkpoints, I still had to reload over and over again as I learned guard patterns, level layouts, and what my assassination options were. I imagine one could blast through Hitman: Absolution in about eight to ten hours, if they were so inclined. Between wanting to explore each level and wanting to get a good mission rating, I'd estimate my playthrough was somewhere in the neighborhood of more than twenty hours.

I wouldn't call it trial-and-error gameplay, necessarily. It feels like experimentation and strategic iteration. Admittedly, for some, I imagine they'll only hear the sound of a duck quacking.

Hitman: Absolution's Contracts mode strips away the narrative purpose of the main game and gives players the ability to create their own missions, using the existing levels and objective types in the main game. The options here range from reasonable to sadistic: beginners might be intimidated by the guideline limiting them to a specific weapon for their primary kill, while veterans will furrow their brow over the requirement that they wear only their suit, never miss a shot, and escape within a specific time limit.

Players can share their contracts online and compete to see who can reach the highest score, which reveals Contracts mode's true purpose: it's a Hitman arcade game, designed for quick play sessions and high score chases. There aren't many contracts currently active, as the game hasn't been released, but what is there has the potential to be frighteningly addictive.

Hitman: Absolution is a faster, more streamlined game than its predecessors, but that only makes it different, not bad. The dark humor has been toned down, but still peeks through. The same anti-hero menace and professional purpose remains. And more importantly, the core purpose and gameplay that's always driven the Hitman series is still there. It's not as cerebral as Hitman: Blood Money. But that doesn't stop Hitman: Absolution from being a smart, unique action title, and a hell of a lot of fun.

Hitman: Absolution was reviewed using retail code of the PS3 and 360 versions of the game, and a pre-release Steam token for the PC release. You can find information about Polygon's ethics policy here, and see an explanation of Polygon's review process and scoring rubric here.

Our review of Hitman: Absolution 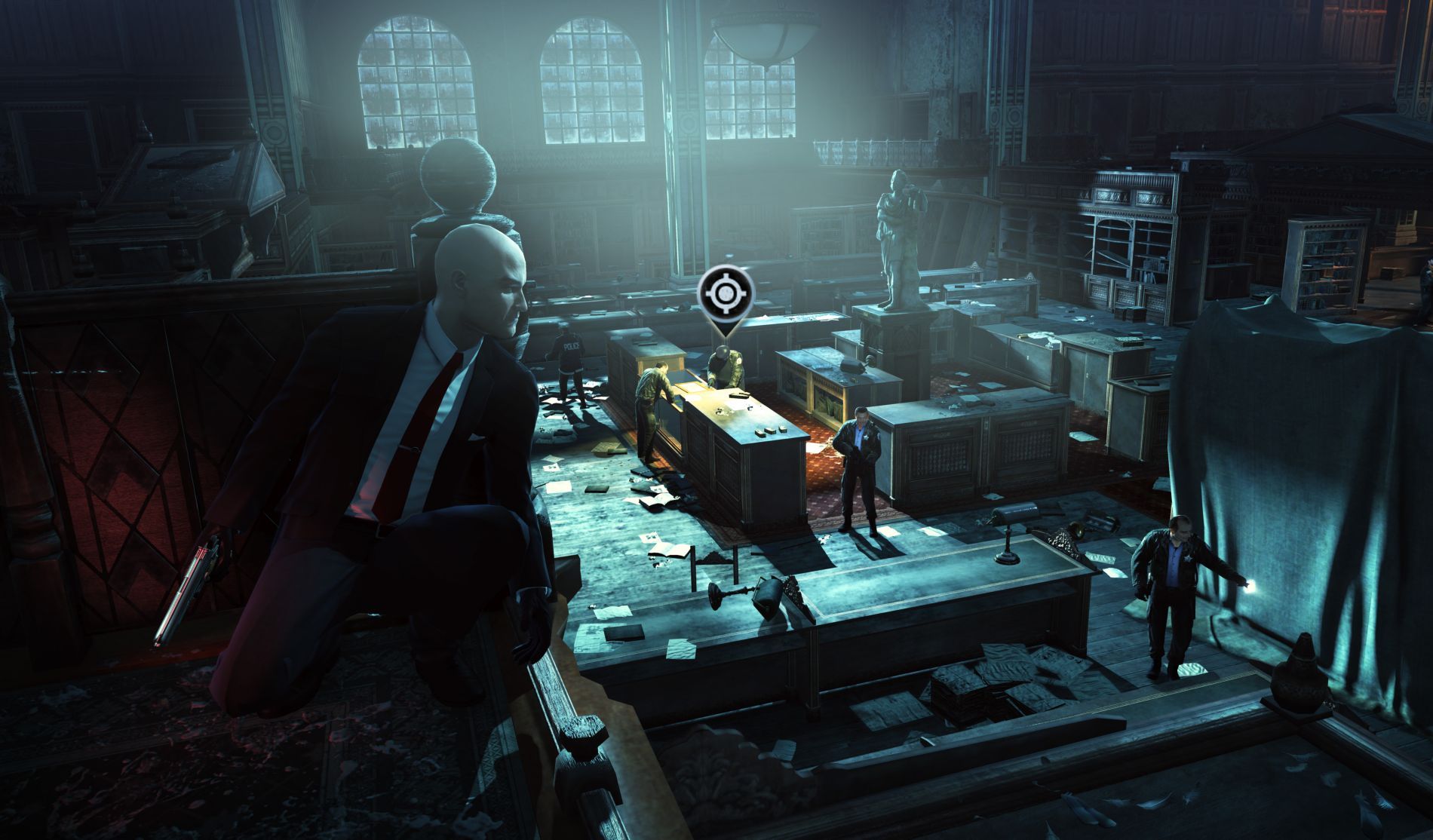