Epic Mickey: Power of Illusion unapologetically capitalizes on nostalgia. It's a hodgepodge of artifacts from a genre that went out of vogue in the mid-90s. Today's platformers are mostly built around locomotion and the clever use of level design to complement that locomotion. Epic Mickey: Power of Illusion (and its ilk, a hereditary line which includes most 16-bit Disney platformers) are focused less on movement, and more on the player's other abilities.

To my surprise, Epic Mickey: Power of Illusion's adherence to the arcane ways of old is not the albatross that drags it down to mediocrity. Quite the contrary, actually: Every part of the game's reverence to the SNES/Genesis era is refreshingly well-executed. Power of Illusion would be a great blast from the past if not for the way it shoehorns the "Epic Mickey" portion of its title into the gameplay.

Within taking the first two or three steps in Epic Mickey: Power of Illusion, its separation from modern platformers is evident. Mickey moves like a sack of potatoes. He doesn't run; he lumbers. His jumps are enormous and sluggish; they feel subject to only the slightest suggestion of gravity. There is hardly any momentum in his motion, but what he lacks in speed, he more than makes up with his diverse set of moves. 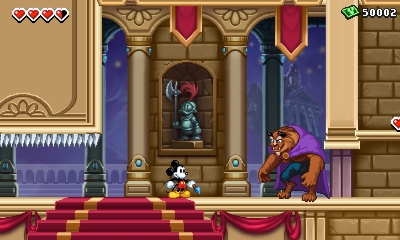 Mickey can butt-stomp enemies, sending him soaring higher into the air (an important level-traversal mechanic, especially later on). He can fire paint or thinner at his foes, awarding him with health or money, respectively. He can perform a spin attack to topple larger foes. He can use some of his paint to summon a friendly unit to help dispatch distant foes. His toolbelt isn't enormous, but it's larger than many of his genre contemporaries.

Epic Mickey: Power of Illusion layers these mechanics on top of one another with near-perfect pacing as the game progresses. The final few levels are the perfect kind of challenge, requiring adept use of every skill at your disposal. You will die repeatedly on some sections, but you'll learn a few tricks for your next run. What I feared might be an overly simple romp turned out to have one of the most elegant difficulty curves I've ever seen from the genre. 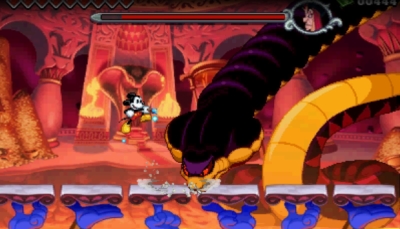 Just when that curve reaches its peak, the game comes to a sudden conclusion. It took me about four hours to finish Epic Mickey: Power of Illusion, which ended up being composed of a disappointingly slim three Disney-inspired worlds. Kingdom Hearts this ain't.

Most of the quests are asinine

The Disney characters you can rescue in each level attempt to prolong the magic by offering sidequests. The rewards for these tasks are potent, necessary boosts that increase your paint supplies, attack damage, maximum health and so on. 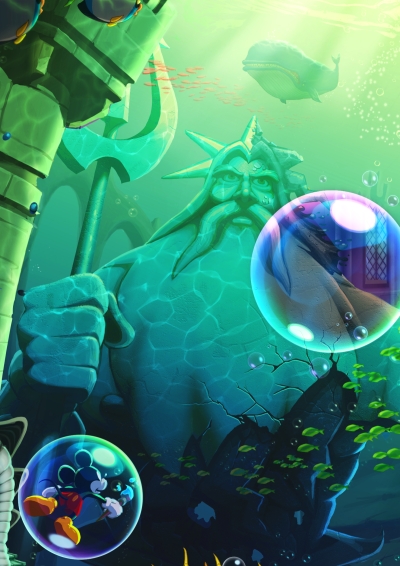 Unfortunately, most of the quests are asinine. Fetch quests will have you play repeatedly through levels you've already completed, hunting for Scrooge's Number One Dime or the seven dwarves' pickaxes. Some quests only require you to go talk to another character, who might just be standing in an adjacent room.

As out-of-place as these odd jobs feel, they're not the worst element borrowed from the other Epic Mickey games. Power of Illusion incorporates the creation and destruction mechanics of the core Epic Mickey series in the least enjoyable way imaginable.

While traversing a level on the top screen, the 3DS' bottom screen shows a paper map of the area. Occasionally, you'll see an outline of something you'll need to progress — a floating platform over a pit of spikes, perhaps — which you must tap, and then meticulously trace. Sticking to the outline awards you with extra paint to finish the doodle, as well as a temporary boost to Mickey's speed and strength. Going over the line means you'll probably run out of paint before the illustration is complete.

Performing these outlines is never fun, especially after you've drawn (or erased, which entails painting over the entirety of the image) one of these oft-repeated objects a few dozen times. Worse still, sometimes you just won't have enough paint to complete an outline, leaving you to hunt for refills or wait for your supplies to slowly, painfully recharge. What little fluidity there is to Power of Illusion goes right out the window when these objects rear their ugly heads.

It's unfortunate that Epic Mickey: Power of Illusion's biggest issues are bound to its licensed identity. Its adaptation of Epic Mickey's binary paint/thinner mechanic is incredibly clumsy, and its Disney characters are underutilized — aside from an apple-chucking Aladdin and a cane-bouncing Scrooge McDuck, who inflated my brain's nostalgia centers with a flood of 8- and 16-bit memories.

Stripped of its mouse-eared trappings, Power of Illusion would still have possessed more than enough nostalgia to enthrall millennial players. Disney games from the '90s weren't just great because they featured characters we'd all seen on the big screen â they also had a unique weight and gameplay loop to them, a feeling Power of Illusion recreates perfectly. But its misguided desire to also be an Epic Mickey game betrays that earnestness around every corner.