L.A. Game Space: a place for growth and discovery

Share All sharing options for: L.A. Game Space: a place for growth and discovery

The L.A. Game Space Kickstarter campaign makes a lot of enticing promises. For $15, backers receive 30 original games made by the developers of Hotline Miami, Adventure Time, QWOP, The Unfinished Swan, Nidhogg and more. If backers donate more, they will receive a pixel portrait by the artists who worked on Canabalt, The Hunger Games iOS game, Super TIME Force and Spelunky. But perhaps the biggest promise the campaign is making is the establishment of a creative and nurturing game space in Los Angeles – a place where ideas are cultivated and celebrated. A place where everyone is welcome.

L.A. Game Space currently has 30 developers on board with an advisory board that includes the likes of the IGF's Brandon Boyer, Mossmouth's Derek Yu, Funomena's Robin Hunicke and UCSB's Jeremy Douglass. The ambitious project to create a space dedicated to games is being spearheaded by directors Adam Robezzoli and Daniel Rehn. Both have big plans for L.A. Game Space.

"We're envisioning a place that brings unlikely people together and where new ideas are born," Daniel Rehn tells Polygon. "The world of games isn't just big, it is many different worlds – big game companies and indies, researchers, artists, players, fans and people who have always wanted to play or even make games, but have never felt welcome."

"Look to the past, imagine the future – no limits, no rules!"

Board advisor Jeremy Douglass says that L.A. Game Space will hopefully be the kind of place where everyone feels welcome.

"Imagine inviting everyone together under one roof and saying: 'Look to the past, imagine the future – no limits, no rules!" he says. "Some of those conversations could spark new ideas that change the direction of games.

"If the doors are open wide enough, the space could also help change who decides to get involved in game creation – or how even people who consider themselves 'non-gamers' relate to playing games."

The directors believe they can achieve this with what they have planned for L.A. Game Space. They want to host large-scale exhibitions to show interactive installations, performances and retrospectives. They want to have residencies that will bring creators from all backgrounds together to collaborate on projects in the same space. They want to have research labs that allow developers to use live gameplay recordings that can be used to gather metadata that can be shared with researchers around the world. And they want to have a speaker series with workshops that are filmed, archived and made available for free online so that anyone anywhere in the world can participate.

Both Daniel Rehn and Adam Robezzoli believe that the space will benefit everyone from game developers to those who just have a passing interest in games, and these benefits will be felt beyond the Game Space's physical location in L.A. 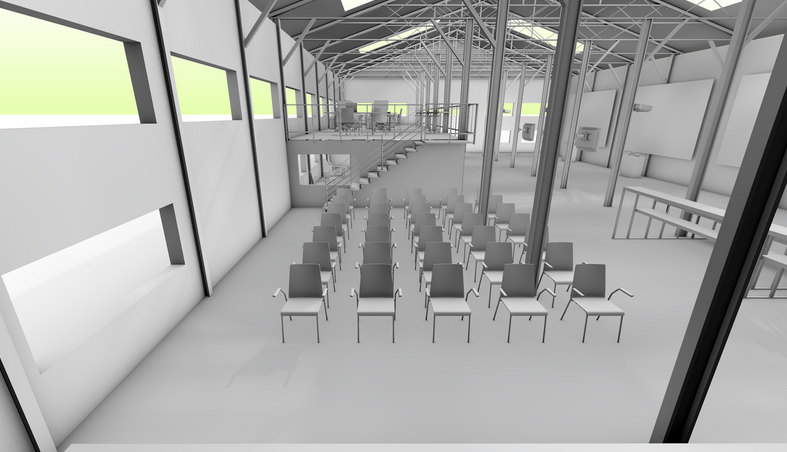 "There are many different groups who will greatly benefit from the existence of the Space," Rehn says. "Current game makers, those who work independently and those who work for large studios will have access to new concepts at talks and educational opportunities at workshops. They will have a physical space to exhibit their work to the public. Game research labs will provide further insight into their games during development. They will have residency opportunities and a speaking platform where they can share ideas with their peers and the public."

In addition to this, creators from other fields will also be welcome to attend beginner workshops and apply for residency opportunities.

The L.A. Game Space Kickstarter campaign is currently asking for $250,000 in order to meet its funding goal. If the project successfully launches, the directors say that the aim is for it to be self-sustaining after the first year. They have strategies in place to help them make this happen, such as hosting concerts and events and using ticket sales to support the programming, and also having a membership fee like most galleries, museums, parks and zoos. They also plan to look into sponsorship from institutions such as schools, companies and other cultural bodies.

The L.A. Game Space Kickstarter campaign has 17 days to go. Those interested can make a pledge here.

"For those in the public that simply love video games, this is a place where they can deepen their understanding and appreciation for them," Robezzoli says.