In a world where man has no choice but to punch his way to freedom, there's only one way to survive: by punching.

True, the basics of Punch Quest, the free-to-play iOS game, aren't super complicated, but once you go a bit deeper, there's a lot of strategy. What load outs should you pick? How do you uppercut a ghost squid without being hurt? Which hat looks the super coolest? These are questions that demand answers!

We've gotten some of the answers from Kepa Auwae, the co-designer of Punch Quest, in the form of ten super helpful survival tips, sure to keep you punching well into the future. Take it away, Kepa!

Dash punches (tap right thumb) do less damage, but are your go-to punch with the best range, and they also increase your running speed. Uppercuts (left thumb tap on ground) make you jump, decrease your speed when used, and do more damage. Slams (left thumb tap in air) hit hard, make you fall faster, and has a better range than uppercuts. Use all three to make your own combos. 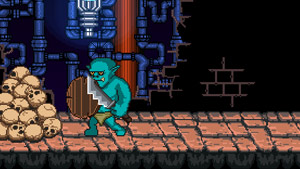 GET EVEN BIGGER COMBOS

The difficulty of the game increases as your score increases. New, harder enemies show up. You can delay this by getting very large combos, as your score isn't calculated until the combo ends. Maintaining an early 200 hit combo will lead to a big surge in points in the beginning, while conserving health. 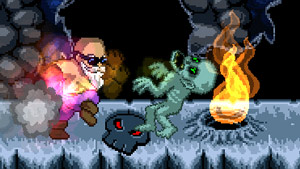 Those purple, volleyball-shaped bats seem pretty harmless at first, but they love attacking you when you're busy punching something else. I recommend either attacking them first, or being ready to block them if they lunge for you. The green and blue bats are much more dangerous. 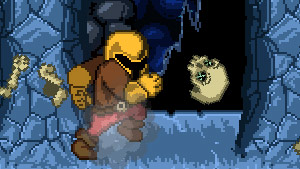 The most dangerous clacking skeleton, has red electricity pulsing out of him. He's very dangerous in that if you jump, he'll jump to try to impale you with his spear. The secret is that he can be tricked... try faking him out with an early jump, then running under him. You can also just barely out-reach his spear range with your slam punch! 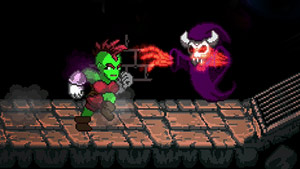 WRAITHS AND THEIR GLOWY HANDS

The early wraiths aren't too bad, just block or jump over their fireballs and punch them. But the later wraith types are hard to hit without running right into their glowing hands. Try jumping and hitting them with a slam punch. With lots of practice, you can also do this with an uppercut, but it's much shorter range than a slam.

You can pick a skill that triggers when your energy is a third full, another skill that triggers when you have a 2/3 full bar, and your supermove that goes off when your energy bar is filled completely. Experiment with different things, and see what works for you. Try balancing offensive and defensive abilities. The next three tips are some suggestions.

This loadout isn't too hard to unlock, and provides a lot of safety. Ki Blast lets you reflect enemy fireballs without losing your combo. Power Slam lets you create damaging shockwaves by slamming enemies or torches into the ground, which can soften up dangerous enemy groups. The Ki Barrage supermove extends the range of your dashing punches, for a period of increased safety. 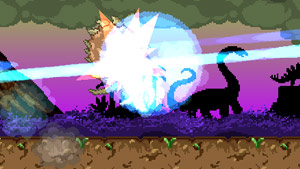 These three abilities have a lot of synergy with each other. Hyper fighting is a supermove that lets you attack twice as fast. Flying fist makes each of your punches keep you in the air longer, and with double attack speed you can fly over dangerous areas. Shieldbuster makes it so you don't kill yourself by punching a spiked shield at high speeds. 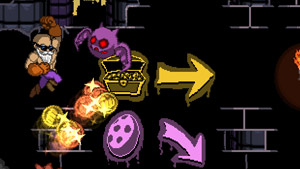 This one is way more on the "offense" side. Husk Musk makes more enemies appear onscreen at once. El Reflecto lets you punch back enemy fireballs, providing some defense during your rampage. Explosive Fist makes any solid punch you do generate a big explosion. Try punching weaker, safer enemies to trigger explosions that take out the more dangerous ones.