Maybe Clementine didn’t go missing when you played. Maybe Lee got bitten by a werewolf. I don’t know.

Everyone should play The Walking Dead. Everyone.

That may seem like hyperbole, but I’m being completely literal. The Walking Dead: Episode Five, cements that.

I have a tendency to review games in the context of genre preference, no matter how much I might like a particular title. For example, you won’t like BioShock, brilliant though it may be, if you don't like shooters. No matter how perfect I may think Dolphin Olympics 2 is, if watching a porpoise flip through space makes you nauseous, it’s not going to be a good fit.

But if you care about games at all, where they’re going, where they’ve been, you have to play The Walking Dead, which concludes this week with Episode 5, titled "No Time Left." Even If you couldn't care less, if you’ve never played a game before, then The Walking Dead is a wonderful place to start.

(Editor's Note: while this review doesn't contain any plot spoilers about Episode Five specifically, it does discuss plot elements from the previous episodes in a broad fashion. As such, if you haven't played previous episodes, you may want to refrain from reading further, just in case.) 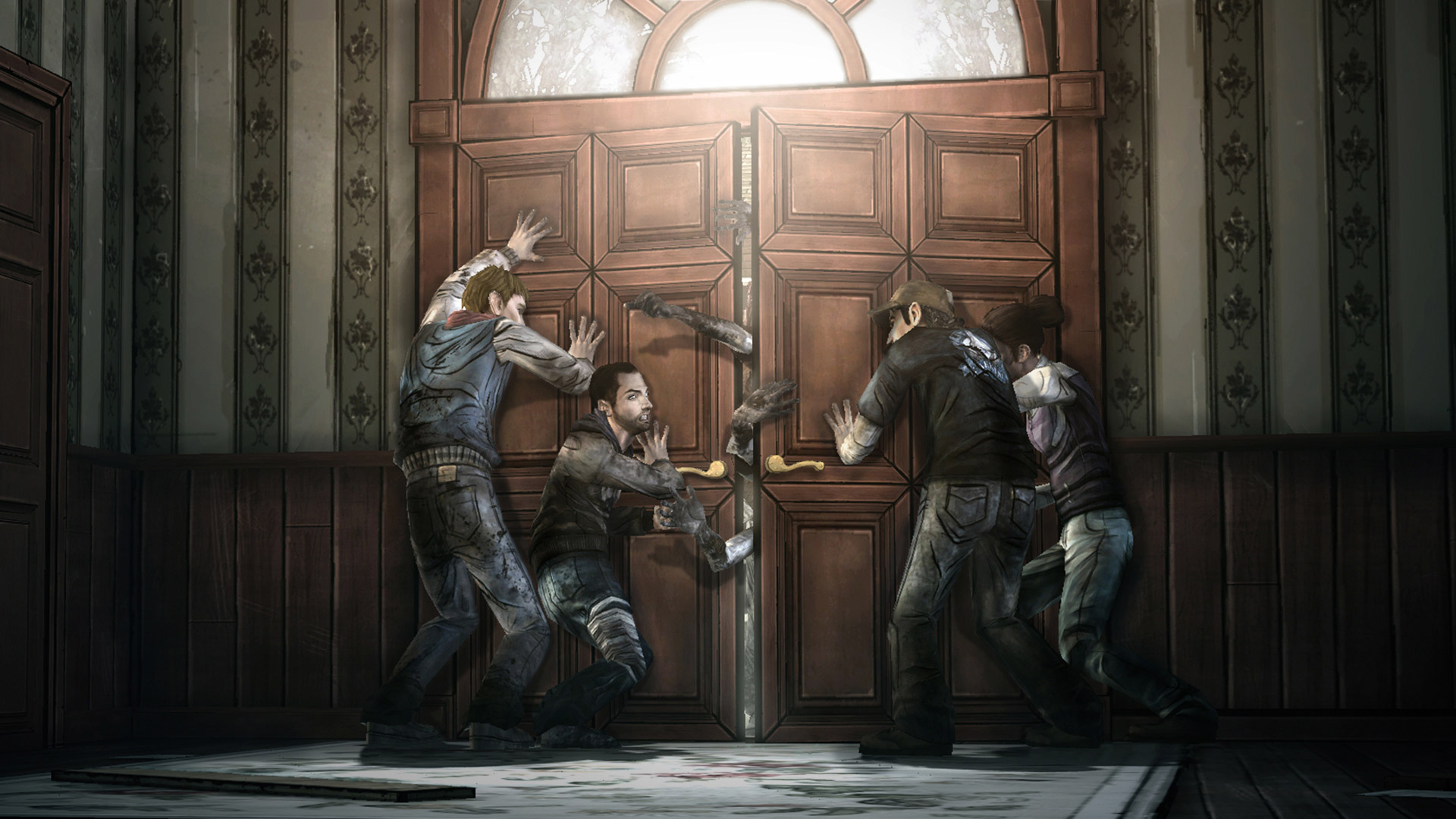 The Walking Dead succeeds by inventing an entirely new kind of game structure. It's a hybrid of game and story where both of those facets are absolutely dependent on one another. 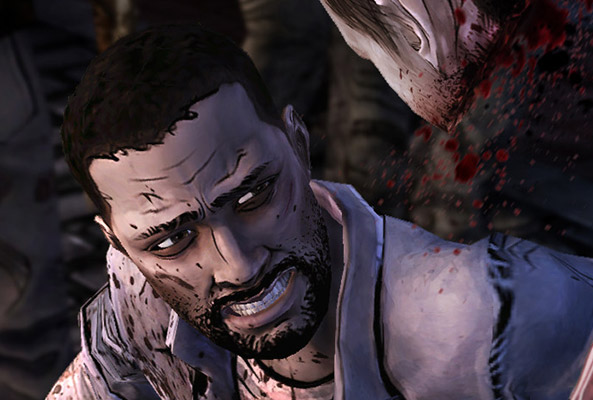 What you’ll realize by the end of "No Time Left," and in turn the end of the The Walking Dead's first season, is that it’s not a branching story. You're not choosing between two parallel outcomes designed by an omnipotent narrator. The story you’ll see is the result of a collaboration between you and developer Telltale Games. The way in which you’ve lead escaped convict Lee to treat his fellow survivors of the zombie apocalypse is a force that often feels as strong and present in the narrative as the guiding hand of Telltale.

As "No Time Left" opens, this relationship between player and author has played out in devastating ways. It seems that any time Lee starts to form any sort of meaningful relationship with another survivor, they’re snatched from the world of the living — if you can even accurately call it that any more.

The few exceptions and stray remnants are all that follow Lee into the heart of Savannah. as he tries to find Clementine, the young girl he’s promised to protect, and somehow stave off the fate that seems inevitable after the end of the fourth episode.

… Wow, was that general enough for you? I’m not playing coy, I literally don’t know how to sum up a story that contorts to the will of the player. Maybe Clementine didn’t go missing when you played. Maybe Lee got bitten by a werewolf. I don’t know.

Regardless of the decisions you’ve made, don’t go in to No Time Left expecting large mechanical payoffs for them. Clementine will not give you a secret key to a magical chest you find along the way to thank you for giving her a PowerBar three episodes ago. 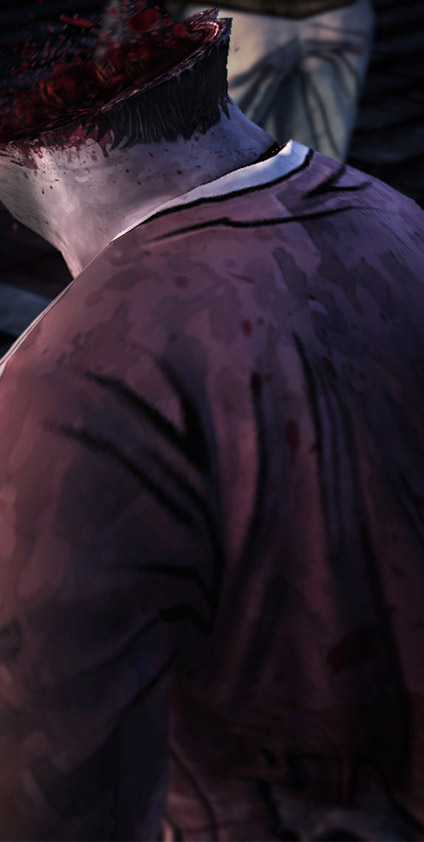 "Maybe Clementine didn’t go missing when you played. Maybe Lee got bitten by a werewolf. I don’t know."

Decisions shape the story in more subtle ways. You’ll see them in a way a character you’ve kept at arm’s length bristles at your risky plan or in a tender look from Clem. Maybe you feel let down that the payoffs for decisions are more story-centric, but it’s absolutely central to the game design model Telltale has built.

Since you’re never penalized or rewarded in a mechanical sense for your decisions, you can base them on more interesting emotional impulses. If giving a PowerBar to Clem isn’t going to grant you additional Light-side Jedi abilities, the only reason to do it is because you care about her. Just the fact you have to make decisions like that about characters without worrying how it’ll alter the swing of an artificially gamey Sword of Damocles over your head steers playing The Walking Dead into refreshingly uncharted waters.

Sadly, Walking Dead still wades into some of the bugs that have plagued the series. At different points during No Time Left I (1) died with no cause and had to return to a checkpoint, (2) had to reset the console after a hard lock and, (3) bizarrely, watched a scene’s dialogue loop over on itself like some hyper-delayed echo. When the complete package comes to retail I sincerely hope these annoying wrinkles will be smoothed out, it’s such a shame how they sully an otherwise completely absorbing experience.

Episode Five proves that The Walking Dead could change everything

But under no circumstance should these hiccups keep you from this incredible, gut-wrenching, dark, unprecedented experience. Like the Flyerâs first lift off or a scratchy vinyl of Love Me Do, The Walking Dead can be a bit rough in patches. But itâs impossible to shake the feeling that the experience youâre having may just change everything.

The Walking Dead was reviewed using a pre-release token for Xbox Live Arcade as provided by Telltale Games. You can find information about Polygon's ethics policy here, and see an explanation of Polygon's review process and scoring rubric here.