Review and information for Far Cry 3

Far Cry 3 marks the series’ return to the tropical paradise setting that birthed the franchise. It’s beautiful and lush and very different from the African savannah of Far Cry 2.

But Far Cry 2 has left its mark on its successor as well. Many of the systems that came to define Far Cry 2 — the huge open world, the vibrant wildlife population, the random series of events that could collide in unpredictable ways and the stunning and dangerous brushfire element — have returned in Ubisoft Montreal’s new island adventure.

What the developer has found seems to be the best of both worlds. Far Cry 3 is a collection of tightly linked systems set in a world confident enough to let them interact and unfold without too much oversight, leading to a mechanically stunning open-world game that basks in managing unpredictability.

The only problem? As usual, human nature.

Far Cry 3 places you in the desperate shoes of Jason, an aimless 20-something captured along with his friends to be ransomed and sold into slavery by Vaas, a psychotic sadist and leader of a band of modern-day pirates. Jason escapes and finds himself in the company of unexpected allies as he tries to find his friends and get off the island.

It takes all of half an hour for Far Cry 3 to feel like the biggest game world of the year. Set on the fictional Rook archipelago, which appears to be situated somewhere near Thailand — though the native Rakyat resemble the Maori in New Zealand, even performing "haka" — there are no skyscrapers or massive structures. But there is a breathtaking amount of island beauty on display.

Far Cry 3 is framed as a shooter, and in that vein, there are plenty of guns, grenades, rocket-propelled grenade launchers and more. But there’s more to Jason’s skill set, which makes for a more sophisticated game. The ability to sneak and to throw rocks to distract enemies might seem like small factors, but combined with instant-kill maneuvers and AI that reacts to the environment, the result is a game that swings back and forth comfortably between action and stealth. 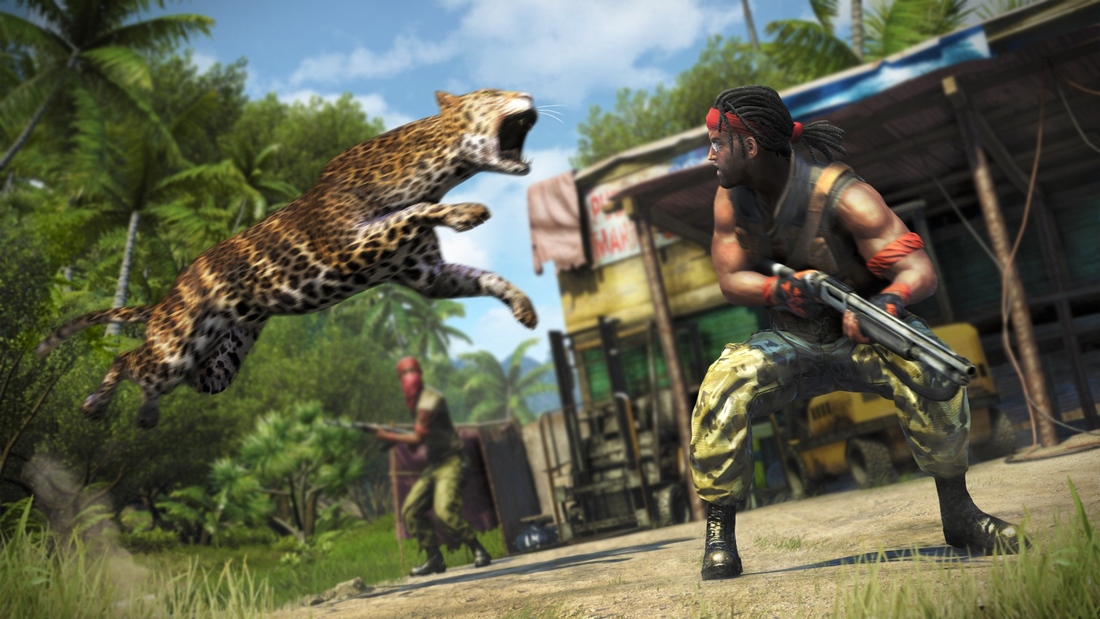 Hunting in Far Cry 3 serves a purpose beyond errant urges to destroy something beautiful. Animal skins are used to create new pouches, loot sacks, holsters and more, each of which increases your various carrying capacities. It encourages exploration, as different animals live on different parts of the island, and some game is more dangerous than others. And tying crafting back into the main game, the best gear can only be crafted by hunting legendary animals tied to specific hunting missions. 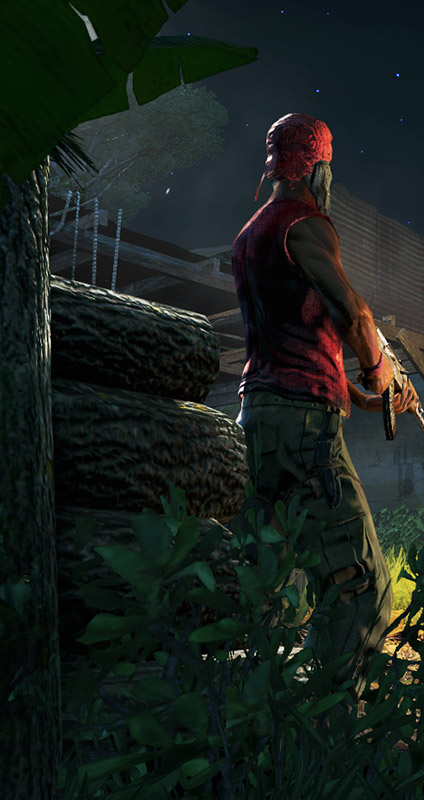 Ubisoft Montreal has in turn built a world that allows for creativity and emergent strategy to unfold. The entirety of the game world is open to you as soon as the tutorial is over, though Far Cry 3 does a great job of slowly introducing it all to you via the early story missions. After that, though, you’re given carte blanche to wander or progress the story as you see fit.

There’s so much to do in Far Cry 3 that it can be intimidating. You can climb a radio tower, which is a platforming puzzle of sorts, which in turn will reveal more information about the area of the island surrounding it. You can storm an outpost like an avenging angel or sweep through it like a ninja drawing off enemies with thrown rocks to pick off with a machete or bow — my weapons of choice — which in turn reveals new side missions. These include special hunts that yield rare skins that can be used to craft the best gear, or can yield contract missions with financial rewards to expand and upgrade your armory. 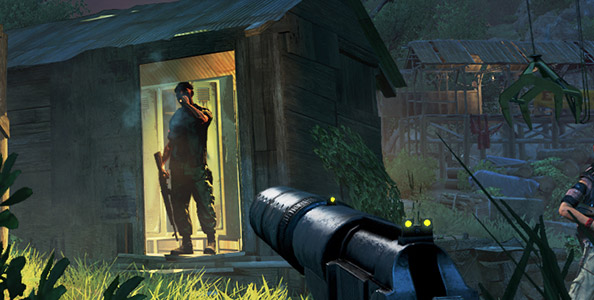 Far Cry 3 nails the sort of cascading mission structure that so many open-world games miss. Doing one thing almost always results in several new opportunities, rewards or results, which ripple outward. It’s easy to get lost on the island without ever going back to the main story, because the loop of radio tower to outposts to hunting missions to contracts to better gear to new weapons and back again circles back so tightly and so effortlessly. For anyone with even the slightest hint of OCD, it’ll be a constant struggle between clearing objectives on the map, hunting new animals for new skins to make new gear and advancing the story to unlock new skills to purchase.

That’s Far Cry 3’s greatest strength — every action has a result that ties into other actions and new rewards. Even from a strictly moment-to-moment mechanical perspective, quickly made decisions have very visible, immediate consequences. An idly thrown grenade might cause a chain reaction of explosions. An errant Molotov cocktail could take out your enemies, but might also surround you with killing flames. That first takedown kill might be perfectly safe, but if you get greedy and, say, use your new ability to chain a second takedown by throwing your first victim’s knife into a second, a sniper you didn’t see might watch it all go down and trigger an alarm, calling in even more enemies.

And once those situations are over, it’s easy to start the loop over again at the radio tower, which leads to the next camp. If you hit a wall with a particularly tough nut to crack, it’s a perfect moment to fast travel to another location to hunt specific game — as in, animals — to upgrade your abilities, find more money and buy better weapons. There’s always another path to take in Far Cry 3, and it’s all expertly tied together. 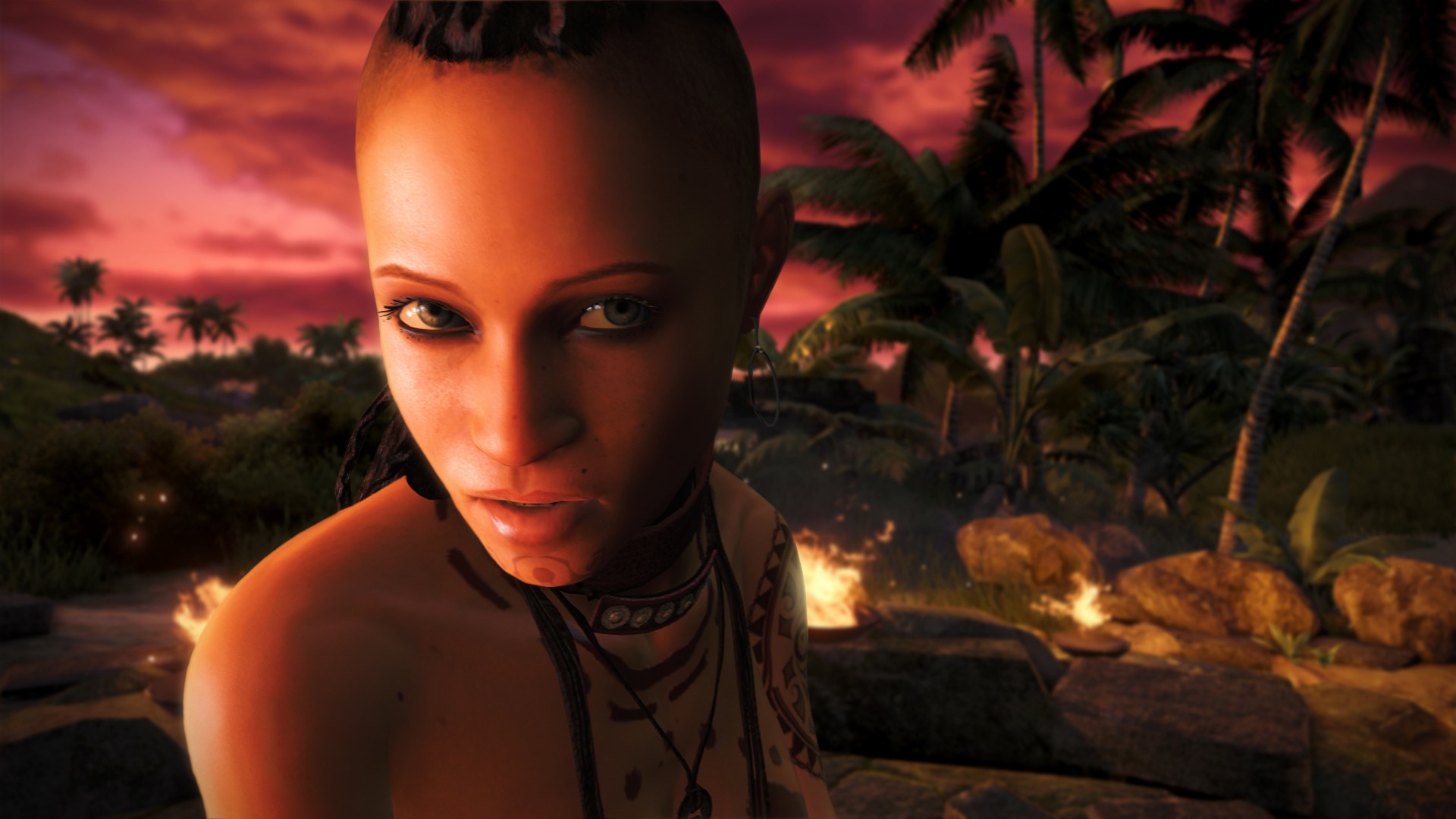 Far Cry 3’s systems and mechanics are so well intertwined that a story that might otherwise be glossed over is instead a glaring problem. The main plot has some interesting character studies to be sure, and there are a few levels that take the outpost concept and blow it outward into massive, multi-tiered firefights tied together by ziplines. But Ubisoft Montreal’s attempts to paint a bloody, modern Through the Looking-Glass collapse under some fairly offensive tropes straight out of Heart of Darkness and Apocalypse Now.

Far Cry 3 includes the obligatory competitive multiplayer modes expected of a AAA title with guns in it, but don’t waste your time. Despite some interesting variations on the standard objective game types — like Firestorm, where each team has to sabotage the other side’s fuel dump in order to seize a radio to call for further support — Far Cry 3’s multiplayer isn’t very much fun. Maps don’t feel very well suited to team play, spawning feels arbitrary and it’s entirely too easy to get caught and stuck on random level geometry.

I didn’t have the opportunity to spend much time with the cooperative campaign, but what I did play took some of the worst mission types from the single-player game and repeated them ad infinitum. Far Cry 3 relies on the breadth of play options in order to meet its potential. Co-op removes that kind of decision-making in favor of more or less straight shooting, and it suffers for it. While there is a unique story behind co-op, it’s hard to recommend given how much content is present in the much better main campaign.

Far Cry 3 attempts to set up Jason’s motivations for revenge and a thirst for the power to take out the over-the-top crazy Vaas and his pirate gang. But it quickly devolves into clichés about the corrupting influence of the savage wild, and plays directly into the white savior trope. It isn’t long before the violence stops feeling grounded and starts feeling deliberately shocking. That same sensibility collides with Jason’s story of revenge and tattoo-driven empowerment. As people start to point out the terrible things Jason is doing in the name of helping his friends, things spiral out of control.

Ubisoft Montreal seems to want to point at what you’re doing and ask, "Isn’t this fucked up?" But the story fails to sell Jason’s growing detachment or discomfort over that detachment, and what’s left often felt exploitative and pointless, dotted with misogyny and homophobia that only works for shock value. Is this hamfisted presentation of problematic imagery and, honestly, gross stereotypes, an issue unique to Far Cry 3? Well, no — see Resident Evil 5, for example. It’s not even unique to video games. The portrayal of post-colonial themes and Western encroachment on other cultures is something that storytelling aimed at mass markets has had a lot of trouble with for decades. But that doesn’t make it easier for me to swallow it here.

Even if none of that matters to you, the story also often leads you on missions that rob Far Cry 3 of the open nature and versatility that make it special, in exchange for excessively linear, more traditional shooter scenarios. Far Cry 3 works when it allows for experimentation and improvisation. It’s at its worst when shooting is all it wants to let you do. 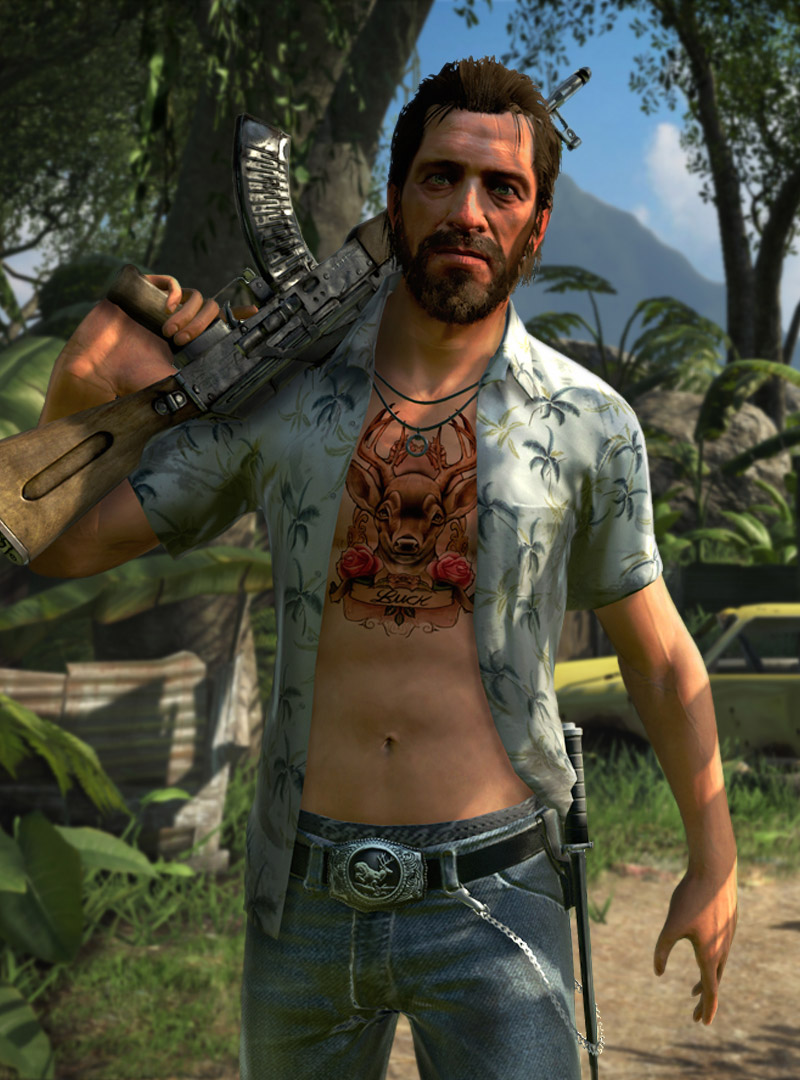 Far Cry 3 is an otherwise superb game marred by some major tonal issues.

The story's sour notes mar what is, otherwise, one of the best games of the year. If you can look past its thematic problems, Far Cry 3âs story isnât without genuine invention and surprise â thereâs a hallucinatory aspect that allows for surprising, disorienting sections of narrative and character development, as well as gameplay moments that defy the basic reality of the rest of the game. When the story isnât standing in its way, Far Cry 3 sees enormous success with its wide-open world and all the numerous things there are to do therein. Ubisoft has created a mechanically ambitious, exciting game.

Our review of Far Cry 3 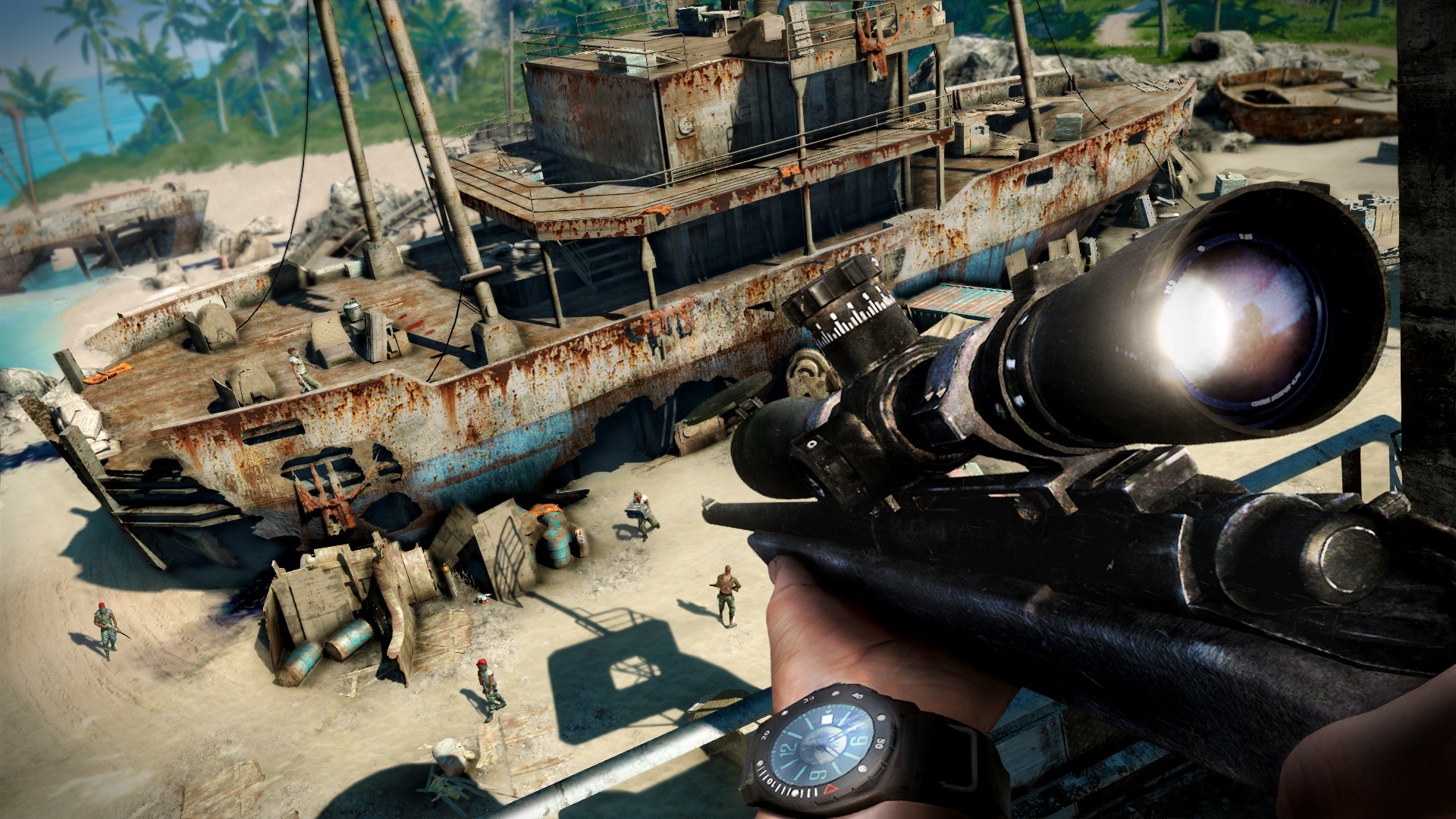