Share All sharing options for: Pokemon's global champs inspire changes to games, promote an eSports future for the series

The recent addition of the final batch of Pokemon World Championship winners to Pokemon Black 2 and White 2 represents more than a digitization of the game's greatest living players; it also shows off the unique relationship between series developer Game Freak, and series nurturer, The Pokemon Company.

That relationship may be difficult to understand, even for a franchise veteran. Game Freak handles all development on the core franchise, while The Pokemon Company oversees licensing and marketing opportunities for the brand. Game Freak, for instance, is responsible for Pokemon Black Version 2 and White Version 2, the series' latest installment. The Pokemon Company, on the other hand, organizes and hosts the World Championship, a global contest to determine the game's best players on Earth.

"Game Freak is certainly not a one-way company," Smith said. "They're open to all kinds of inspiration, ideas, thoughts, and we work with them tightly. We do stuff they've come to and enjoyed, then gone back and developed around — things like play environments that we set up for both the Trading Card Game and the video games.

"They'll come to a variety of events — more in Japan, but they come to our World Championships every year — and they'll see games being played. They'll see things like times between moves, how long the animations take, the balance of the game, which Pokemon are stronger, which are weaker. They incorporate that into their thought process about the development of the next game," Smith added.

"Game Freak is certainly not a one-way company."

A perfect example of that is the Pokemon World Tournament, an updatable arena in Pokemon Black and White 2 which was inspired by the real-life Pokemon World Championships. The in-game arena shares the spectacle and bombast of the real-world one, treating its juvenile combatants like honored Olympians.

With these updates, players will be able to square off against trainers like real-world global champs like Ray Rizzo and Wolfe Glick, whose digital counterparts use the six-Pokemon teams they used in the championships.

Their inclusion in the franchise is a fitting reward for their time commitment, Smith explained. For years, winners of the Pokemon Trading Card Game Championship have had their decks sold as boxed sets in stores — now, The Pokemon Company has the ability to honor the game's players in the same way. 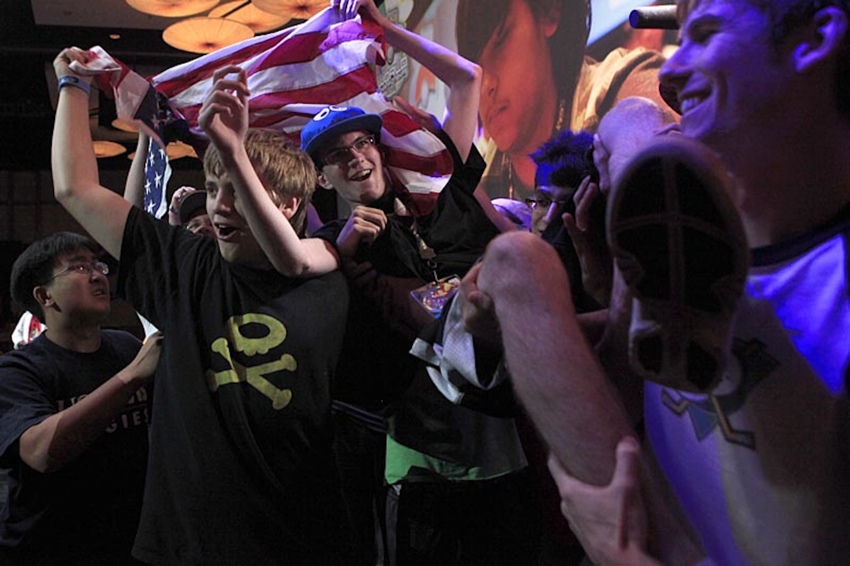 Of course, there are some differences between real-life Ray Rizzo and his digital counterpart. For one, digi-Rizzo utilizes a pre-made sprite which doesn't actually look anything like him. Also, for high-level Pokemon play, collecting and training your Pokemon is just half of the equation; how you strategically use them in battle is equally important.

"Since Ray is not controlling these Pokemon, he's obviously not going to use the moves the same way," Smith said. "That was a challenge; we really wanted to make sure it was used appropriately. Sometimes, the digital trainer will make a boneheaded move that Ray never would have. So, it's not complete in that way, because you don't have the brain, the mastermind that came up with it programming the actual AI. But the move set and strength of the Pokemon that have been trained are certainly represented in there."

Even without that strategy, besting the World Tournament brackets is going to be a challenge for your average, casual Pokemon fan.

"I can't hold a candle to what they're able to do, training-wise or strategy-wise," Smith said. "I've actually only downloaded the Junior league, with my Pokemon at around level 30 when I did it, and I got absolutely destroyed. I did damage to one Pokemon in the very first round before four of mine were knocked out. It's an unbelievable difference."

Smith said that The Pokemon Company sees this cross-promotion as an opportunity to expand Pokemon's cachet as an eSports contender. It's not an easy hobby to take so seriously — many of Pokemon's expert-level mechanisms, like Effort Values and Nature Breeding, are hardly surfaced in the games at all.

"They're spending a ton of their time with our games, and they deserve to be rewarded in this way."

Still, more recent installments in the series have added features to support players "on the path" to high-level play. Online matches made getting in some practice an easier prospect. Being able to watch and share your replays let you consult on your strengths and weaknesses. As the community grows, its tutors become more capable, exponentially lowering the barrier for entry.

"We may not have been streaming for all these years, but we've definitely had this community of players that are eSports athletes from the get-go," Smith said.

The in-game Pokemon World Tournament will help that process along, Smith said, and there's "a lot of opportunity" for adding even more trainers into the mix. But this first batch was a perfect first step, because it gave some hard-earned recognition to the series' biggest fans.

"This really is one of those situations where we couldn't lose," Smith said. "These guys are so excited because a lot of them won scholarships, they all got trips to the world championships, they got to participate on this grand scale, their names are all over the place; and now they get to be in the game. One of the players, we gave a tour here not too long ago, he said he was actually able to beat himself — which I'd hope he'd be able to do, since he could really deconstruct his own strategy.

"It's just been really cool for us to be able to do this," Smith added. "They're spending a ton of their time with our games, and they deserve to be rewarded in this way."