Scribblenauts Unlimited is a charming learning toy, but it's not much else. The third iteration of the Scribblenauts series flounders in the transition from mobile/handheld to console game, failing to buttress its premise — create whatever you'd like! — with an engaging story or objectives.

For all of its wide-eyed imagination, there's just not much game to this game.

In case you've never heard of the breathlessly praised Scribblenauts, they are puzzle games in which the player uses a magical notebook to turn words into tangible creations. If a giraffe is thirsty, you might write the noun "water" to conjure a bottle of water. Or if a hunter is tracking an endangered lemur, the player might stop the crooked killer by applying the adjective "broken" to his weapon. Scribblenauts Unlimited expands further upon the power of the notebook by letting players manipulate size or — using a new creation tool — design their own people, beasts or inanimate objects. 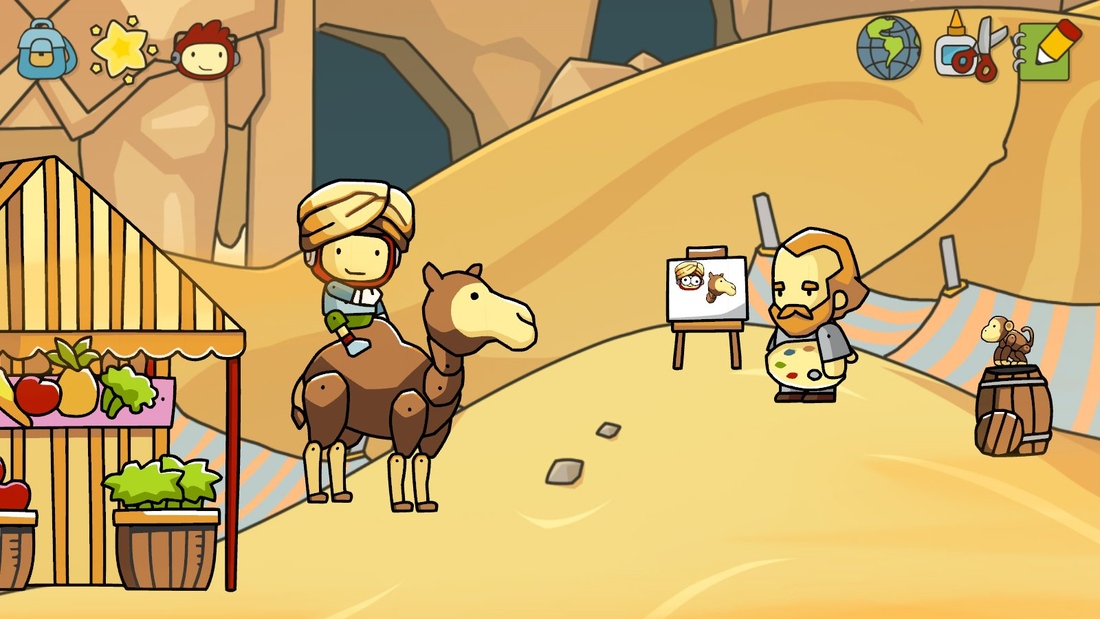 The creation tool is a pleasure, if not a bit difficult to get the hang of. Players can combine and modify Scribblenauts Unlimited's thousands of objects to form their own creations. Modification isn't limited to visuals. A surprisingly deep list of selections dictates how the creation behaves — how it moves, how it reacts to fire, how it reacts to people, etc. Created objects can be shared via an internet connection, which is a great way to show your creativity to others — or, as players have already done, show your ability to steal from other franchises by creating the cast of Mortal Kombat and Halo's Master Chief. 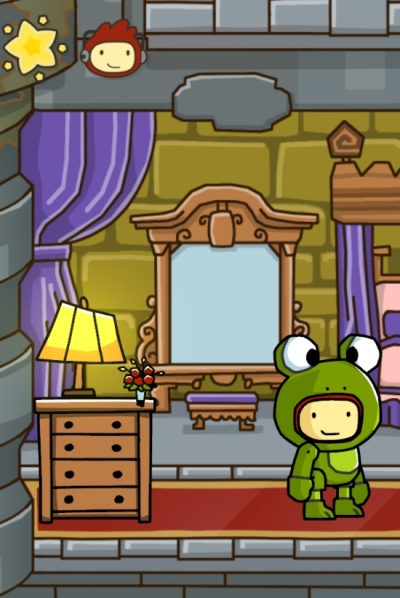 Being able to create or manipulate whatever you can imagine — barring vulgar words and proper nouns — is magical. But Scribblenauts Unlimited fails to combine that magic with gameplay that transcends answering riddles.

For the first two Scribblenauts games, this weakness was overshadowed by the novelty of the notebook. Who cared about missions when you could create a Cthulhu to battle a horde of nuns, or a squirrel with an affinity for water skis? These games were designed exclusively for mobile and handheld platforms. Brief on-the-go play sessions benefited the wacky but insubstantial structure. 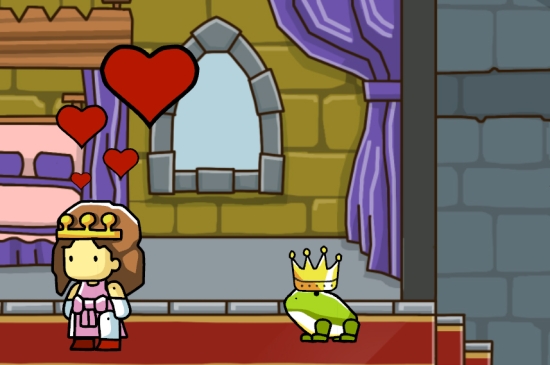 At its best, Scribblenauts Unlimited spins little narratives out of longer puzzles, so that the player is filling in the equivalent of a playable Mad Libs: The bride needs an ADJECTIVE NOUN but the marriage won't be official without an ADJECTIVE NOUN. I'd choose "Ghost Husband" and "Onion Ring."

But even with that amusement, puzzles tend toward repetition. Many don't leave enough room for creativity, promoting silly workarounds like using "gun" to solve problems X, Y and Z. I used a rocket launcher to solve a dozen puzzles — not out of laziness, but because more creative solutions failed.

Scribblenauts Unlimited borrows the worst aspect of old-school adventure games, where I was constantly trying to guess what the developer wanted me to do. I didn't learn to play the game; I learned to think like its creators. For a series that's supposed to be all about creativity and imagination, that's a major issue.

It's most enjoyable when played like a handheld game. The GamePad is a natural fit. In fact, it feels as though the entire game was built with the GamePad alone in mind. Tapping letters into the magical notebook and selecting puzzles is simple and fun. The only problem with such a focus on the GamePad is that it all but minimizes the use of the television. In the many hours I spent playing the game, I looked up for maybe 15 minutes. The ability to play Scribblenauts Unlimited exclusively on the GamePad is tucked into the options menu, and I recommend it. Save a few bucks on your power bill. 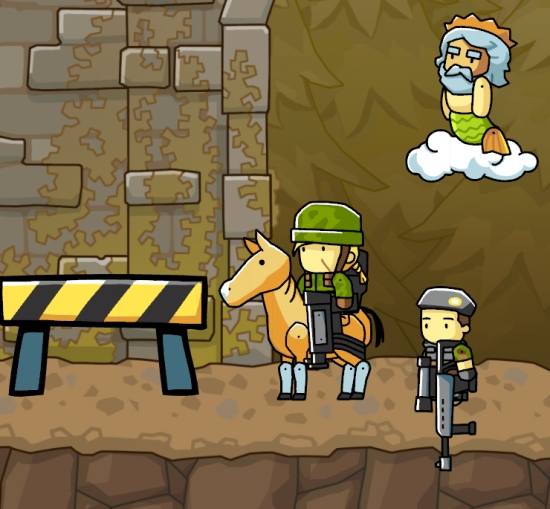 I didn't learn to play the game; I learned to think like its creators 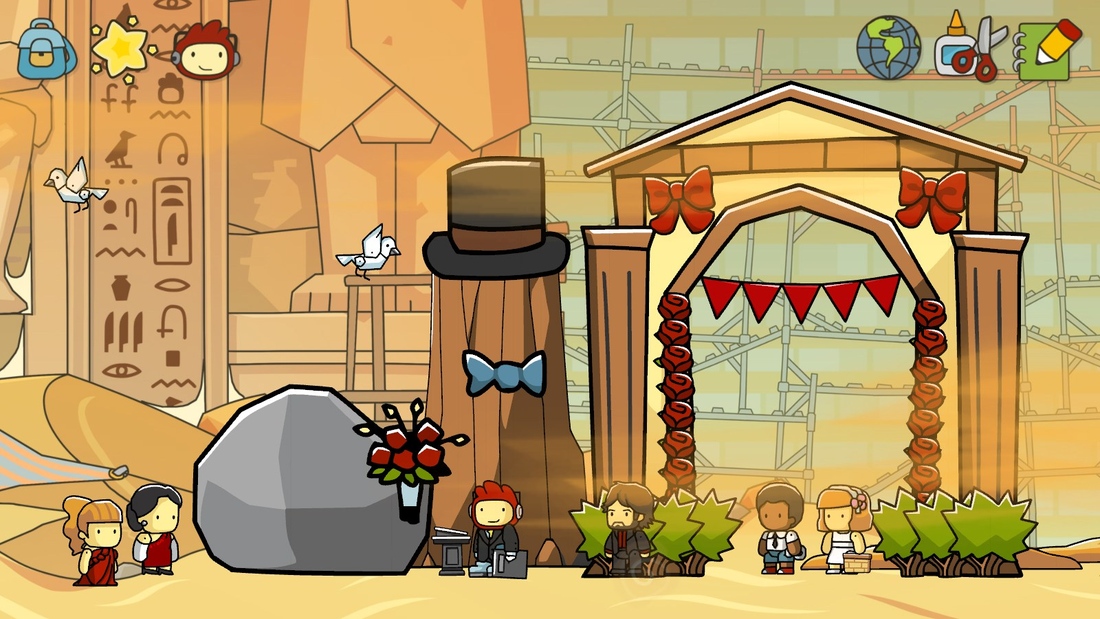 For a game concept so heavily invested in creativity, Scribblenauts Unlimited can be confoundingly strict about what works and what doesn't. Here are two examples of the brain-dead solutions I was forced to conjure up:

2.) A hippie asked me to prevent a lumberjack from chopping down a tree. I gave the lumberjack a love potion, which produced no results. I handcuffed the lumberjack to another tree across the map, but that didn't solve the puzzle either. Frustrated, I conjured a gun and murdered the lumberjack I'd bound to the tree. Puzzle solved. Really, that solution worked.

The GamePad screen is also used for Starite Vision, which casts the hub stage in shadow, painting selectable puzzles in gold. The decision to hide the location of the puzzles in a puzzle game is maddening. I found myself leaving Starite Vision on, which defeats the point of setting the game in a beautifully drawn world. It is an extra and unnecessary layer of obfuscation. 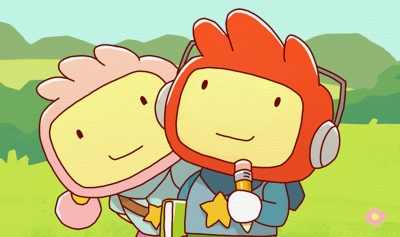 A cooperative multiplayer option might persuade some players to use the television screen. Players with Wiimotes are limited to controlling the people and objects created with the GamePad. My squad of recruited co-workers was bored within minutes. And that's when the Wiimotes worked. The Wiimotes became unpaired from the console multiple times, a problem I haven't had with any other local multiplayer games on the Wii U.

In short, Scribblenauts Unlimited does not succeed as a console game. But there is a silver lining for families with younger children. Scribblenauts' puzzles are, at their core, simple word prompts, asking players to make use of their vocabulary or to expand it. The game offers plenty of visual problem solving, affording opportunities to teach new words. A child might know what a mummy is, but when the game asks for an "embalming liquid," they can learn formaldehyde. And probably embalming, too. The puzzles also have a Monty Python-esque sense of humor that plays to both children and adults.