Share All sharing options for: Creating twisting towns in the new SimCity

The new SimCity's road-building tool will allow players to set down roads in almost any configuration, filling in connecting structures like bridges and tunnels automatically and guiding players like their own personal civil engineer.

"It all started with a desire to build cities that weren't on grids," SimCity creative director Ocean Quigley told Polygon. "It was the initial, fundamental decision to allow players to build cities with more free-form shapes. And once you make that decision, you need to change your fundamental architecture - including how you define roads."

For the first time in a SimCity game roads and paths are 3D objects. In previous titles, roads were 2D paths, preventing players from building roads crossing under a bridge or having bridges intersecting.

"It's more than just filling cells with road tiles, but building an actual object path," Quigley said. "It's an artistic challenge. You're laying a spline out through 3D space. We've built the tools to let players transparently create some pretty complex 3D structures."

Quigley says the team wanted to make the drawing system intuitive, allowing players to "free draw" roads between points and have the system fill in the gaps, interpreting how the road will lay over the landscape and smoothly integrating them into the environment.

"When I worked with Will Wright on SimCity 4, he told me, ‘The one thing I've learned from working on SimCity is that roads are really really hard,'" Quigley said. "We did a whole bunch of initial exploration for how roads would work before the new SimCity even got off the ground. It's such a nasty and difficult problem."

Quigley's uphill battle to create perfectly curved roads continued for nearly three years. He convinced SimCity 4's road engineer Venkat Ajjanagadde to join the new SimCity team due to his smart work on title's road system. The team experimented for a few months before hitting a dead end, so they scrapped everything and started fresh. 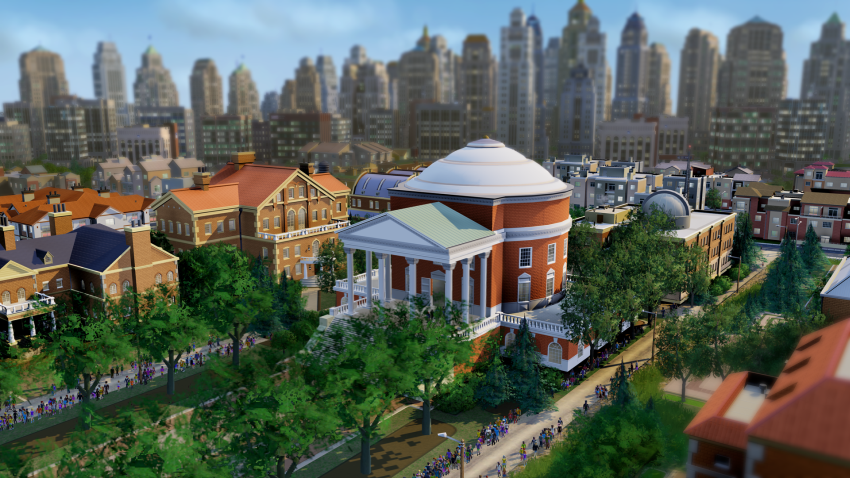 "He's a very very bright guy," Quigley said, "one of the only people I know bright enough to pull [the roads] off, and it took him a year and a half. It's only really solidified in the last few months, and that roads are working the way we want them to. We still have polish and cleaning up to do. "Because there's no grid this time around, roads serve as the underlying architecture of cities, driving areas' spatial organization, including building orientation and distance between them."

Quigley and his team hope to create more organic looking cities by including four different categories of roads: curvy, for smooth continuous arcs and 90 degree turns; simple straight roads; city block roads, which create rectangles that allow buildings to develop back to back against each other; and freehand or "wiggly" roads, which players draw freely across landscapes and is useful when creating switchback mountain paths or roads that hug coastlines.

"You do the draw you want, and under the hood we've built the infrastructure to make the draw succeed."

Power, water, sewage and even pedestrians will all travel down paths created by roads, creating the network between buildings. Maxis wants to make sure players' attempts at drawing roads always succeed, so the program will automatically fill in gaps over bodies of water or canyons with bridges and automatically burrow through hills to create tunnels.

"Imagine you have a perfectly flat city, just a chunk of prairie somewhere," Quigley explained. "If you draw a road, all you have to do is put down a road and it works, don't need to take height into consideration. In a city separated by a canyon, with chunks of land on either side, if you draw from one end to another over the canyon, the program will automatically build a bridge and do the modifications to make that bridge work. You do the draw you want, and under the hood we've built the infrastructure to make the draw succeed."

Roads even have a minimum slope angle of 30 degrees, aping the steepest road in the world, Baldwin Street in New Zealand. Players aiming to plunge roads straight down cliffs can go for this angle, otherwise they will need to draw switchbacks or curved roads sloping down a mountain. Players who want to build cities packed with aesthetic bridges and tunnels will need to choose a terrain that supports those opportunities — so, not Quigley's prairie.

"The system will try to find the cheapest way to get from point A to point B, and if it can't do a straight road it will build road cuts and retaining walls, and bridges and tunnels as a last resort," Quigley added. "You can't build unnecessary bridges or tunnels either.

"Think of it as having a civil engineer on staff round the clock to make sure you don't build unnecessary infrastructure," Quigley said.