The Cave: a journey to the carnival in Ron Gilbert's dark comedy

Share All sharing options for: The Cave: a journey to the carnival in Ron Gilbert's dark comedy

Before we start our latest hands-on with Double Fine's The Cave, Ron Gilbert makes one thing clear: "The Cave is an adventure game, not a platformer. Adventure games are the greatest genre in the world, and The Cave is an evolution of that."

It's not a shock for Gilbert to align himself so strongly with adventure games. He helped the genre grow 20-plus years ago by working on titles such as Maniac Mansion and The Secret of Monkey Island. "When Maniac Mansion came out, some people didn't think it was an adventure game," he recalls, "because it had a lot of character animation. The genre has changed a lot, and with The Cave we looked at what makes up an adventure game right now and how we wanted to change that."

The first step in changing the genre for Gilbert and his team at Double Fine is also the reason The Cave has been mistaken as a platformer: 2D sidescrolling gameplay. According to Gilbert, the team was seeking "something where the movement through the world is fun but not necessarily a challenge."

"I suck at platformers," he admits. But he still believes that the moment-to-moment movement and play of a platformer is more engaging than the old-school adventure style of clicking somewhere on a screen to move your character. "There's a nervous energy to The Cave," Gilbert says. "Even when you're not making progress or not doing anything, you can still be jumping around.... It exercises a different part of your brain than the puzzles."

Gilbert's theory that platforming can ease your brain while you solve puzzles certainly holds true for my hands-on time. As we've previously detailed, you choose three of The Cave's seven characters at the start, with each chosen character getting a certain section of the cave devoted to their psyche. I teamed up with another journalist to work through an area devoted to the Hillbilly character.

"I suck at platformers."

The Hillbilly's portion of the cave has taken on the form of a carnival that houses his true love. To win her heart, the Hillbilly has to win a teddy bear, which in turn requires conquering a number of carnival games rigged against him. Luckily with help from his Monk and Adventurer partners, the Hillbilly can outsmart these trials.

Each puzzle in the carnival is themed after events that will appear familiar to anyone who's ever visited a county fair. For example, a water dunking tank hides one of the tickets, but in order to recover it you need to send one of your characters into the depths below the tank. Luckily, the Hillbilly comes equipped with a special power allowing him to hold his breath indefinitely.

A more devious puzzle waits at the weight-guessing station. Any of the three characters can step right up and have an obnoxious carnival barker estimate their weight, but you don't get a ticket unless he gets it wrong. And he never gets it wrong. Elsewhere in the carnival, a depressed magician repeats the same disappearing trick on a cupcake over and over again.

After bouncing around aimlessly for a while, my co-op partner and I piece together a solution: We grab a barbell from the strongman and carry it back to the magician. The sadsack performer doesn't even notice the switch-up and turns the barbell invisible. We drag it back to the weight-lifting machine and filch a ticket from the stunned employee. 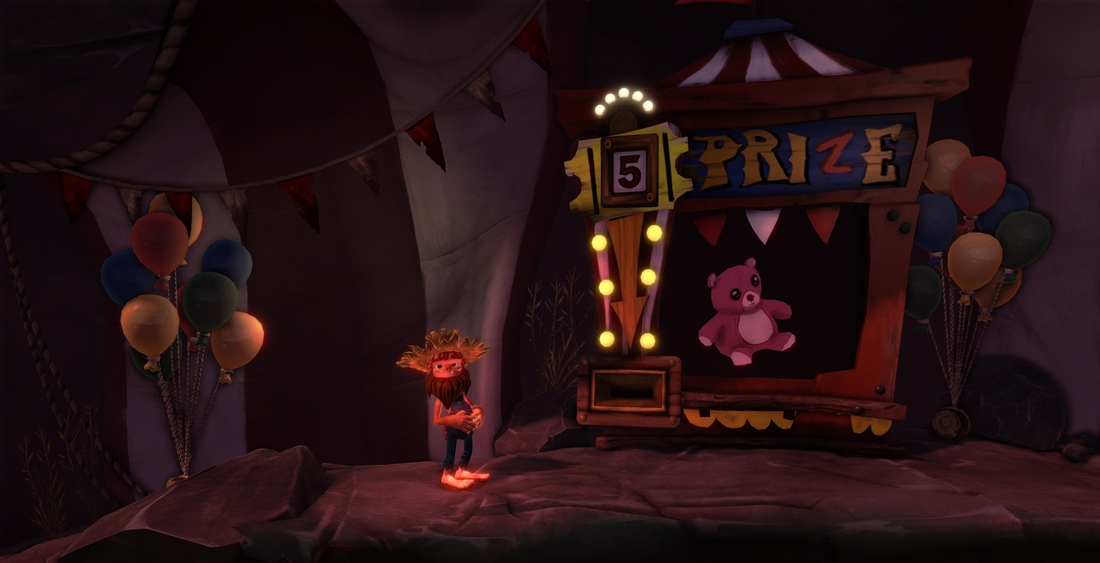 Other puzzles are a bit more co-op-centric, requiring different characters to hang out far across the level from each other. In one, the Hillbilly uses a wrench to temporarily disable a power generator while the Adventurer platforms up a ferris wheel and grabs a fuse out of a fusebox at the top. Try to grab the fuse when the power is still on, and the character will get fried.

Even when playing with multiple players, the puzzles are still placed with logic in mind rather than action. They require slow swapping between characters, and there's no split-screen and no online co-op, so only characters on screen at any time are controllable. If the second player has the Monk at a strategic location off-screen, they'll need to actually tap a button to move the camera over there.

Gilbert says this limited form of co-op in The Cave is very deliberate. "We didn't want to bite off more than we could chew, but we also wanted to make sure that the core co-op experience was really good," he explains.

By Gilbert's estimation, "Adventure games are the original multiplayer games for a lot of people." He recalls huddling around a computer screen with friends to solve classic text adventures. "The Cave is like that experience, but instead of just telling your friends what to do, you're actually in there controlling another character."

Gilbert also believes The Cave could be a fantastic game for couples. "A lot of times I'll play games with my girlfriend, and either she's not interested in what I'm playing or I'm not interested in what she's playing, but we still want to sit on the couch together and watch. If I can just pick up the other controller and trail behind her as she's doing stuff, that would improve that experience.

"It's about getting people in physical proximity to interact more directly," he says. "It's a snuggle game."

My biggest surprise from this session with The Cave is that despite its humor — or its description as a snuggle game — there's a very grim undertone to the plot. By the time the Hillbilly gathers enough tickets to purchase the teddy bear he needed to win over his true love, she has already fallen in love with the strongman. The final puzzle for the carnival area involves mending the Hillbilly's broken heart...by setting fire to the carnival.

"I find that when I'm writing characters, the characters that are damaged to some degree are a lot more interesting," Gilbert says. "There's something a little bit twisted about each of the characters in The Cave."

Double Fine is walking a fine line between emotions with The Cave. "You can tell a dark story, but because it's also humorous, you can make light of it," says Gilbert. "We want you to understand and experience what's wrong with these characters but not in such a heavy way that you're neck-stabbing dudes with daggers."