Lego Lord of the Rings continues the Lego franchise's push into big, open worlds (as first seen earlier this year in Lego Batman 2), but the Lord of the Rings license allows Traveller's Tales to blow up the scope exponentially. Outside of Lord of the Rings Online — a massively multiplayer game — no one has built a virtual recreation of Tolkien's fantasy realm of Middle-earth as detailed or vast as this.

Traveller's Tales has followed suit with Lego Lord of the Rings' design, expanding the Lego formula in ways that make it feel more like Lord of the Rings while simultaneously increasing the already overwhelming number of addictive collectibles and upgrades to hunt down. It's easy to write off Lego games as quick cash-ins meant for kids, but Lego Lord of the Rings makes the best argument yet that this series should not be ignored.

Lego Lord of the Rings follows the hobbit Frodo Baggins and his crew of companions as they maneuver through tense political alliances, a brewing war and many more obstacles on a quest to destroy the One Ring. The scenario may seem a little overblown for toy figurines, but it provides a good excuse for a journey across all of Middle-earth, which players explore in the form of a giant open world. Within that world, they'll hit specific points where the game breaks off into smaller, linear story levels. 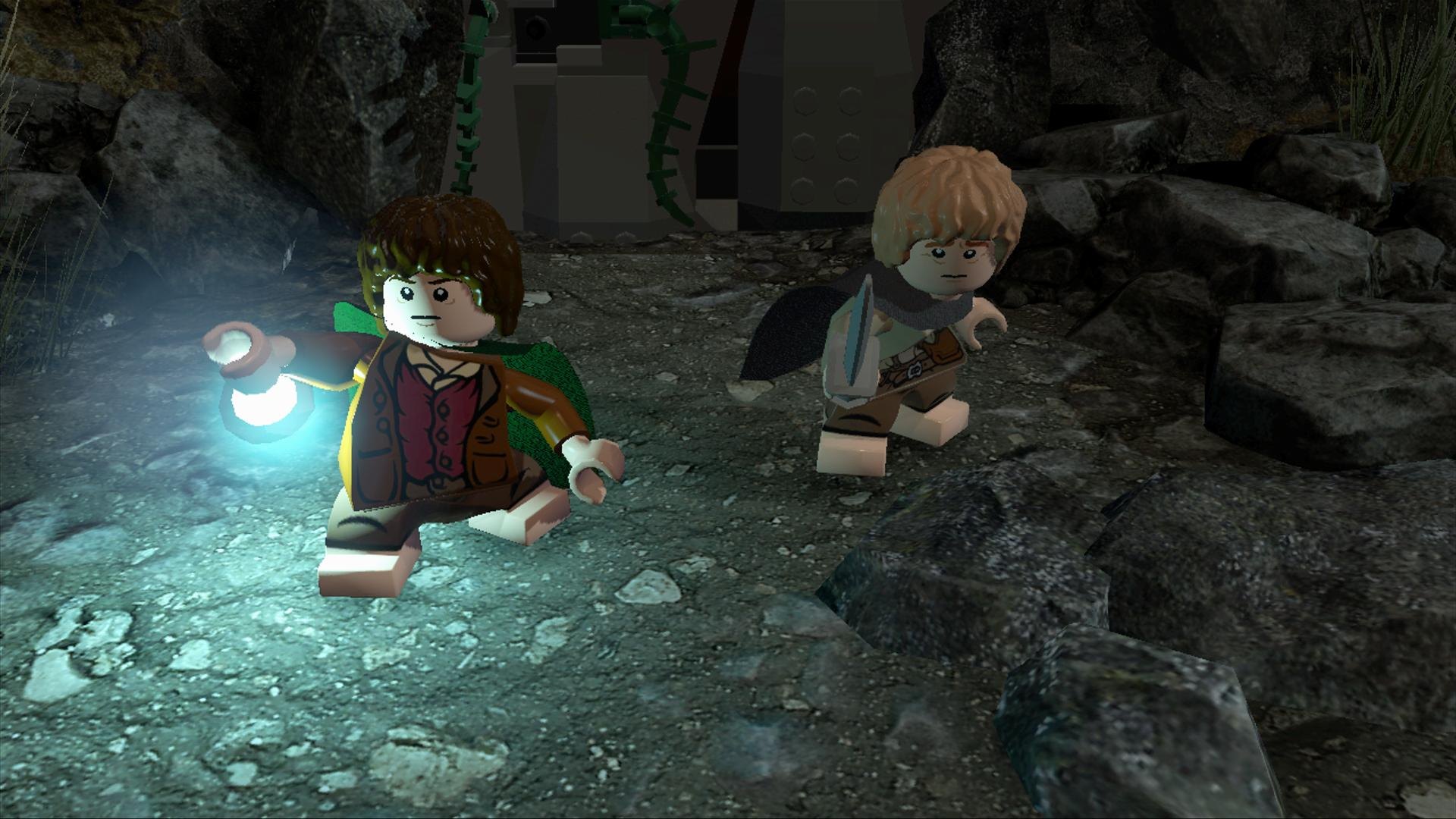 The core of most of the story levels hasn't changed from past games — smash up Lego sets and enemies, build bridges and ladders to solve simple puzzles and perform some light platforming — but many of the levels benefit from their own unique hooks. For example, Frodo's ability to use the One Ring to turn invisible introduces simple stealth gameplay to some levels. The idea of a sneaking mission in a Lego game sounded awful to me at the start, but it's implemented very well. Between the game's instant respawn, no-penalty death system and enemies that are scripted more for enjoyment than intelligence, I didn't have to endure any frustrating trial and error to pass these segments. 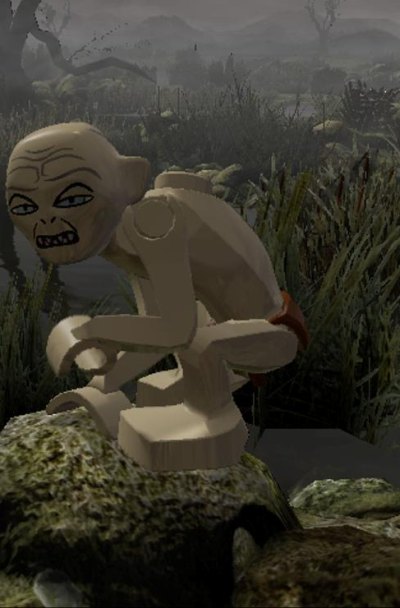 Story levels are also supplemented with impressive setpiece moments — from facing off against massive enemies on packed battlefields to an intense boss battle concluding the Mines of Moria. These heavily scripted segments maintain player control but add a heavier touch of the cinematic to the Lego series. They made me feel like I really was in control of legendary characters like Strider and Gandalf — and, in most cases, without dumbing the gameplay down with quick time events.

It makes sense for Lego Lord of the Rings to focus on presentation, since it borrows so heavily from the film trilogy. Of particular note, all of the dialogue in Lego Lord of the Rings is lifted directly from the movies. While that guarantees a level of quality to the acting, it makes for some awkward issues with background noise in the audio tracks. The hyper-serious tone of the film voiceovers also makes the fewer-than-usual bits of Lego slapstick humor fall flat, since they're brief shots at levity in the midst of grave circumstances.

The true meat of Lego Lord of the Rings comes after the story levels are complete. Once the credits roll, "open world free play" is unlocked, which allows you to explore Middle-earth to your heart's content, replay levels and hop into the body of any character you've unlocked. Mostly, though, it's a cue to focus on what Lego games do best: mountains of collectibles.

In addition to the expected Lego distractions — such as red blocks that reward you with cheat toggles — this giant world has some major additions to the franchise. Characters scattered around will give you quests, while mithril blocks can be gathered and used to craft a huge variety of new items. Despite its imposing size, Lego Lord of the Rings' world strings together fun activities and collectibles masterfully. Collectibles have always been a major part of the Lego games, but it's never been as fun and rewarding to hoard them as it is here. 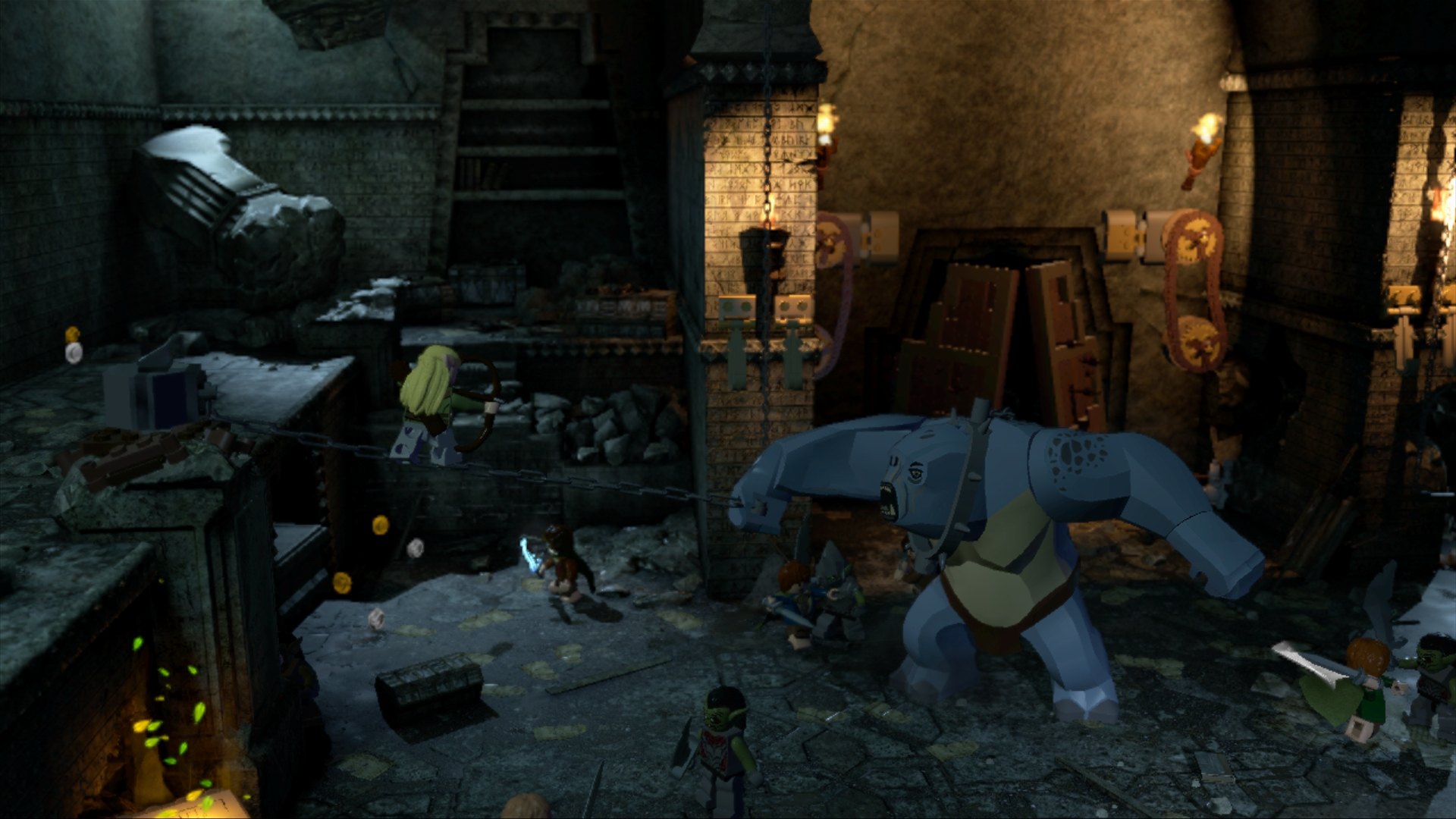 The best reward you'll find is new craftable items. The crafting system fundamentally changes how character swapping works in Lego games. Previously, each character had a certain number of abilities, and they'd need to be swapped for other characters as the level design demanded. For example, Gollum is one of the only characters in the game who innately has the ability to fish items out of water. But if you craft yourself a mithril fishing rod, suddenly any character can have that ability.

Uncover enough blacksmith designs, and you'll be able to stick with your favorite characters in almost any situation, stopping only to switch which item they have equipped. The variety of equipment and character choices fit naturally with the setting and make the game feel even bigger.

The size and scope and even basic design of Lego Lord of the Rings makes the absence of online co-op more frustrating than it's ever been. It was a problem in Lego Batman 2 earlier this year, and it's an even bigger bummer here. Lego Lord of the Rings gives you the freedom to walk from the opening areas in The Shire to the end goal of Mordor with no loading, so why is the multiplayer across these huge spaces restricted to local? 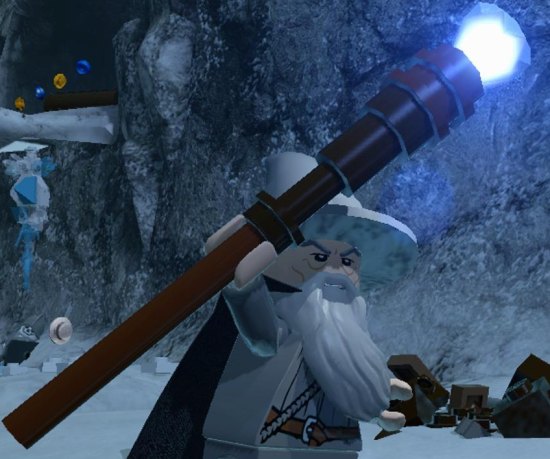 A second Lego Lord of the Rings game is all-but-certain with The Hobbit movies in production, so having a bit of space to grow isn't the worst thing. Traveller's Tales will have to work hard to top what it's created here, though. Even with the occasional silliness, Lego Lord of the Rings perfectly captures both the great action of the franchise and the majesty of the world Tolkien created. It's the first Lego game since 2005's Lego Star Wars that I can recommend with very few caveats.

Lego Lord of the Rings was reviewed using a retail Xbox 360 disc provided by Warner Bros. You can find information about Polygon's ethics policy here, and see an explanation of Polygon's review process and scoring rubric here.