When Mike Ando visited Washington-based developer Cyan Worlds in 2006, he was feeling a little bold.

Ando had flown out from his home in Australia for Mysterium, the annual convention for Myst fans. Ando had been attracted to the idea of re-creating the games' teleporting "Linking Book" in real life, but only complete accuracy would do. But the physical book used as the model for the book found in-game was a heavily-guarded Cyan secret, something that Ando had been trying to figure out for himself for five years.

While touring Cyan's studio, he found the book on display, a large sign beside is exclaiming "Do not touch" in bold letters.

"I spent around 5 years hunting down a copy of the book, which is the main reason this project took so long," Ando told Polygon. "I'd flown all the way from Australia and didn't feel like letting a little sign stop me. When no one was looking I opened the book to the first page, took a photo & quickly closed it again, all in less than second."

The Myst franchise is a series of adventure games set in fantasy world in which time and inter-dimensional travel is possible. Players use these Linking Books to transport themselves to other parallel worlds, called Ages.

Ando chose to keep the identity of the prop book secret "so that [he] wouldn't be fighting other fans to find it." The book used as a reference when creating the texture of the virtual book for the game was a volume 54, issue 312 of Harper's New Monthly Magazine. On a second trip to Cyan Worlds in 2009, he again snapped a secret photo of the book, this time concentrating on its binding.

Ando found the copy of Harper's New Monthly, a nearly 5-inch thick leather-bound collection of the magazine's articles that would become his Linking Book, on eBay after scouring the Internet for one in good condition. 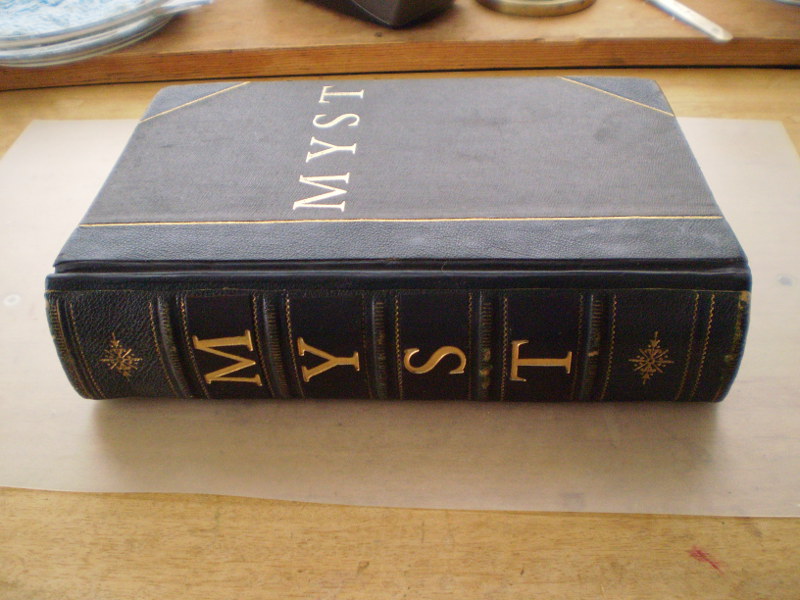 "I basically bought every single book I could find that ticked all the correct boxes... for five years straight," Ando said. "I've actually had a lot of feedback from people that are very upset I destroyed an antique book, I didn't expect that reaction.

"Most people think that all old books are valuable, but that's not true at all," he added. "There's plenty of old books that're essentially worthless as a book. Old tax books are a good example. The book Cyan used is basically a 135-year-old cross between a Reader's Digest & a gossip magazine, and most of the time it only carries snippets of the articles which makes it even less useful. Even when it was made, the book had very little value."

Ando, has been a fan of the Myst series since its first release in 1993. Ando also participated in beta-testing for 2003's Uru: Ages Beyond Myst.

"Ever since I first played the game I wanted a Myst book, but it's literally only in the last year that the advancements in technology has finally made it possible," Ando said.

"I have a medical diagnosis of Asperger's Syndrome and Myst is my 'obsession' or 'thing,'" he added. "The games have helped me through some hard times in my life."

Ando's initial plan was to use a full-color holograph image since it was difficult to build a computer small enough to fit in the book. But as netbooks became more popular, embedded computers evolved smaller and faster, leading Ando to scrap the holograph idea. 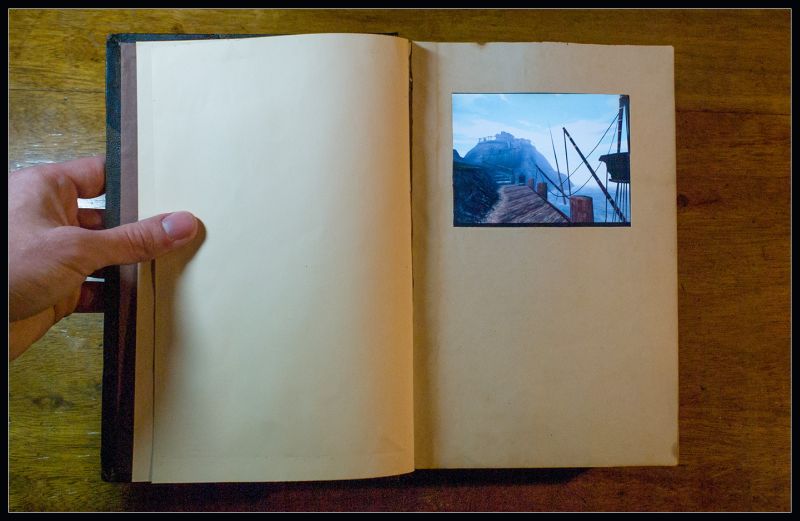 "I originally planned to basically build something like a phone that would only play the first two games," he explained. "But after a couple of months I decided to set the bar as high as I could: all the Myst games, at a smooth framerate, all on the one book! Aim high or don't aim at all."

The guts of the book are a miniaturized desktop computer, a screen and power supply stuffed into a 4.7" space. Ando had to modify most of the components to make them fit, clipping circuit boards and swapping a few out to utilize every extra millimeter.

The book runs the realMyst remake with with modified touchscreen controls, which Ando chose to use because he wanted to include the "best" version in his prop.

"Where possible, I've tried to use the best, oldest edition," Ando explained. "While almost all the Myst games have been re-released to work perfectly on modern computers and you can buy many of them in a couple clicks from Steam or GOG.com, in some respects one of the unseen challenges of this project was getting all of these very specific older versions working together."

Ando has completed several other Myst-related projects, including a mechanical clock that uses the games' unique 25-hour timekeeping system.

"The distinct atmosphere of the games is very Jules Verne-esque," Ando said. "There's definitely a small but ardent group of fans who still make artwork from these video games. If something isn't directly from the games, many fans make artwork based on themes from the games."