Angry Birds Star Wars unites the most popular video game of this generation with the most popular film franchise ever. Such a high-profile combo may trigger a gag reflex in the throats of gamers and Jedi alike, and understandably so. Both have been thoroughly spurned by insipid tie-ins and cash grabs. But Rovio's latest flies to the tender core of such cynicism and blasts it to stardust, with a payload of creativity, playfulness and reverence for the beloved sci-fi classic.

Understand that the Angry Birds games, in the most basic sense, are about gravity. The original Angry Birds pitted the player against Earth's gravity, requiring him to use the familiar up and down arc of a projectile to attack an enemy. Angry Birds Space improved upon this concept by adding and subtracting gravities, demanding players navigate multiple gravitational fields and the frictionless space between them.

Angry Birds Star Wars is the first in the series to allow players to manipulate gravity. The Obi-Wan-bird (that sound you hear is a thousand Star Wars fans groaning at such a phrase) has the ability to use the Force (a telekinetic-like power) to bend the gravity surrounding objects on the screen, batting them like tinker toys in any which direction, often toppling nearby, precariously built architecture in the process. The Force also serves the enemy pigs. Darth Vader-pig levitates platforms in certain stages, and taking him out releases the objects, raining down on helpless Empire-pigs. The Force isn't just a gimmick in Angry Birds Star Wars, it's a layer of strategy.

Environments are a surreal amalgamation of the two universes, bordering on ironic pop art. The wood, glass and steel building blocks of the previous games are constructed to resemble Tatooine Landspeeders and moisture farms. The vines of Dagobah become suspension bridges, and the towers of the Death Star become barricades, protecting Stormtrooper pigs. The end result is more Spaceballs than Star Wars, a mish-mash of trippy visuals and in-jokes. 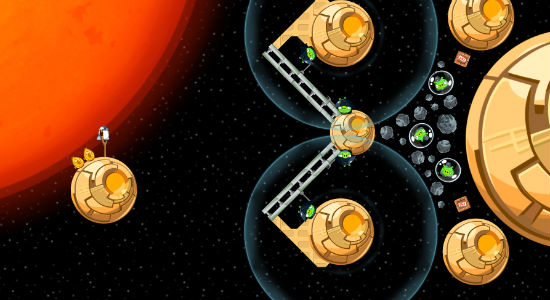 Speaking of in-jokes, the compulsory inclusion of fan-service calls to mind Disney's recently released Wreck-It Ralph, the computer-animated film about a rogue arcade villain, which was clearly made by people who love video games. This app is the inverse, a game clearly made by people who love Star Wars films. Bonus levels, unlocked by collecting stars in the campaign, go so far to let the player play as R2D2 and C-3PO-birds — both with unique abilities — while a cut-scene reveals who truly shot first in a certain controversial showdown on Tatooine.

Angry Birds Star Wars leaves plenty of room for expansion. The first two sets of levels track the events of A New Hope, while a soon-to-be-released free Hoth level pack will dig into the beginning of Empire Strikes Back. If you're looking for more, you can buy an additional level pack, set in Dagobah, at a cost of $1.99. It's a bit irritating to see this sort of thing on the release day of a comparably brief game.

The makers of Angry Birds Star Wars have imagined how the the original Star Wars trilogy might have looked if performed by their coterie of birds and pigs â truly, a bizarre undertaking. Angry Birds Star Wars succeeds, though, because it is more than just a Star Wars tie-in. It is further proof that the creators at Rovio intend to expand their franchise beyond a novel physics toy, that they want to make Angry Birds a fleshed-out game.

Rovio could have easily (and probably lucratively) placed new Angry Birds levels in front of a handful of static backgrounds inspired by the settings of Star Wars films and called it a day. They wouldn't be the first to do as much with the Star Wars brand. Instead, they have in Angry Birds Star Wars a respectable sequel, one that both incorporates the fiction of the brand, but also improves on previous games, progressing the franchise.