Markers? Necromorphs? Dead Space 3 will answer all your lingering questions

Share All sharing options for: Markers? Necromorphs? Dead Space 3 will answer all your lingering questions

It wasn't for lack of trying. Upon completing the game, I went back and pored over Wiki pages written by fans, of documentation released by the developers. I read the summaries of the three Dead Space novels (a fourth was just released last month), the comics and the ill-conceived anime. I was confident that, somewhere in all those words, something was explained.

The answers I'm looking for aren't exactly small ones, either. Since the beginning of the franchise, stone objects called Markers have played a crucial role in Dead Space. And yet, throughout all the media that's been released, no one knows what they do or why they're there. They clearly have something to do with dead people turning into monsters with knife hands, but what exactly is that connection? And is there a purpose for those monsters besides just scaring the bejeezus out of me?

Editor markup for Dead Space 3 Research Facility screenshots. This is only visible in the story editor.

At the end of Halo: Combat Evolved, we knew what the Halo did. We knew why the Flood were there. Those big questions were answered. Yet, after multiple games, movies, comic series and novels, Dead Space has remained a pretty closed book.

I think I deserve to know what's up.

So, at a recent EA press event in New York City, I asked someone who might be able to help me out. Chuck Beaver is the story producer for Dead Space 3 and I'll admit that I probably was a little hostile at first.

"What the hell is going on in these games? None of it makes any sense!" I exclaimed like a madman.

Chuck was calm. "What makes the least sense to you?"

His voice lulled me back into a more human state and I explained my confusion over the Markers, the Necromorphs and everything in-between. His answer made it sound like he's gotten the question before.

What the hell is going on in these games? None of it makes any sense! 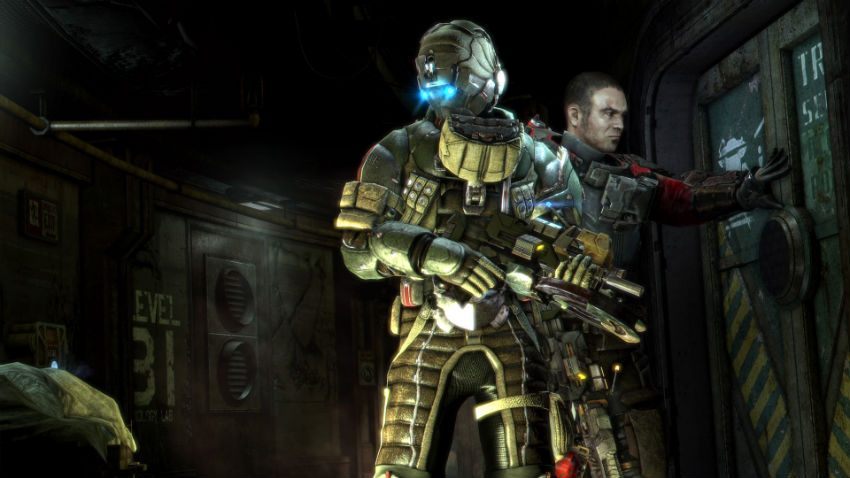 That left me relatively satisfied, though still skeptical. After all, I was told the same thing before the release of the last game. But Beaver made me a deal. "I will personally answer questions for you after you play Dead Space 3. Questions that haven't been answered, I will tell you. Because we have answers for everything."

Which isn't to say Dead Space 3 will be a straightforward, mystery-revealing smorgasbord. There are still plenty of strange moments, some of which can only be experienced when playing with a buddy. For example, you'll be walking down a hall in a derelict space ship when, strangely, you happen to see a dissonant object. In my case, it was a man-sized toy soldier statue. I asked my co-op partner what he thought that was about, but he hadn't seen it. True enough, upon glancing over at his screen, there was no toy soldier there. The psychological elements that have always been a big part of Dead Space return in the third game, and it looks like the developers have come up with a clever way to weave them into multiplayer. Everyone in these games seems to have some form of psychoses, so depending on who you're playing as, you'll be affected differently.

This all goes back to the questions surrounding the Marker. After all, it seems to make people crazy. As for the whys and hows? Seems like we'll have to wait until launch day for those answers.