Share All sharing options for: Johann Sebastian Joust, Pole Riders and other indies come to Kickstarter in Sportsfriends bundle

Johann Sebastian Joust, the independently developed PlayStation Move folk game that quickly became a hit at gaming events across the world, will finally be released in commercial form next year as part of a bundle of similar, local multiplayer indie games called Sportsfriends.

The bundle, which includes Joust, Ramiro Corbetta's two-on-two minimalist sports title Hokra, Noah Sasso's Smash Bros.-esque BaraBariBall, and a new version of Pole Riders (titled, naturally, Super Pole Riders) from QWOP developer Bennett Foddy, is seeking $150,000 on Kickstarter. If successful, the bundle will launch as a downloadable game on PS3 in either the summer or fall of 2013, and will make it to PC, Mac and Linux months later.

Johann Sebastian Joust creator Douglas Wilson explained in an interview with Polygon that the bundle and Kickstarter are the best options for releasing his experimental title. The four games included may seem quite different at first blush, but Wilson explained that they all share one thing in common: an appreciation for local multiplayer.

"We started thinking about stuff like the old Summer Games compilation, or something like Wii Sports," Wilson explained. "We thought, maybe we can take the bundle idea, but take it further; do some sort of compendium where the games share a design philosophy and kind of mesh.

"The hope is that they share this similarity of just being these games that are catalysts for whole events," Wilson added.

Both the project and Kickstarter have both received full approval from Sony, who will support the game with its Pub Fund project. Once the bundle is finished, Sony will support the team with marketing, as well as a financial guarantee on sales. However, the Kickstarter funds are required to finish development on the quartet of games, all of which are currently playable in some form or another.

Adam Boyes, vice president of publisher and developer relations at Sony, explained to Polygon that Sony has been trying to find a way to support Joust for quite some time now.

"I think ever since the first videos circulated, there were people who took notice within Sony," Boyes said. "I've only been with Sony for six months, so coming in, I had the same perspective many outsiders had, which was: Why isn't PlayStation working with Doug and his crew?

"We've been spitballing with them over beers for over a year, a couple of years, at every event," Boyes added. "I sat down with them in Seattle, Doug and I, we were catching up over drinks at our PAX mixer. We were just trying stuff out. That's the beauty of this final culmination of it: We can try some new stuff that will measure interest in the public on the Kickstarter side, and then on the backend, we have the Pub Fund to help get them over the hump." 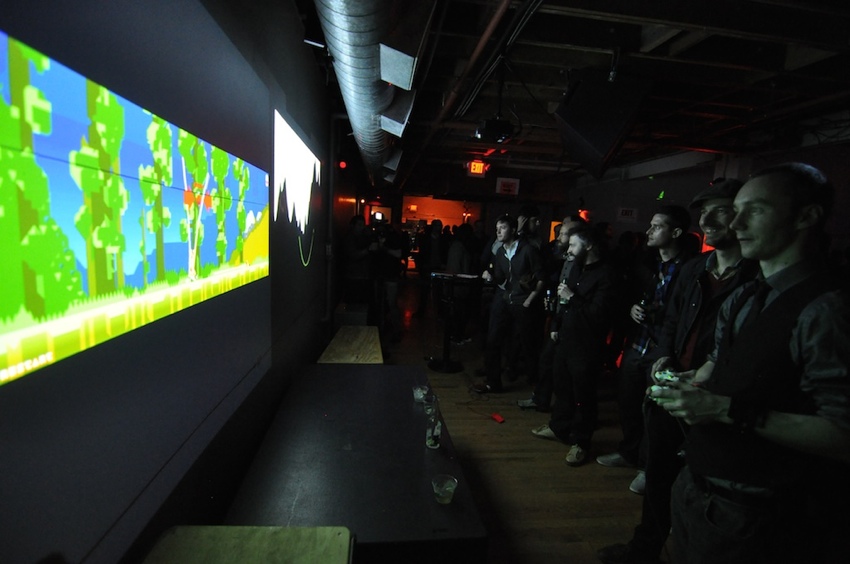 When asked if he expects the PS3 release of Sportsfriends to push PlayStation Move sales — Johann Sebastian Joust, in its current form, supports up to seven of the controllers — Boyes explained that the experience of Joust is more important than the fact that it utilizes first-party hardware. In an era where game publishers are scrapping over new audiences, a bundle of accessible games is a draw for the company.

That kind of publisher support is an outlier, Wilson said. Though he acknowledged that there are still companies making compelling local multiplayer games, he feels the genre is losing cultural relevance for both game creators and consumers. Publishers, he argues, are less interested in local multiplayer, instead favoring network play and polished single-player campaigns. Those same publishers are leaving behind something great from past console generations.

"For me, having grown up with the Nintendo 64, the big addition for that was the four-player multiplayer right out of the box," Wilson said. "The most successful games on the 64 for me were like, Goldeneye, Super Smash Bros., Mario Kart — these games where you'd get four of you all on the same couch in the same space. Those games focused on a simple, really accessible kind of fun. That stuff isn't new, but it's been lost a little bit, with the focus on Battle.net, and online gaming.

"Obviously network play does some stuff that local multiplayer can't," Wilson added. "The point here isn't that network play is bad, but I think ... complacency is a good word. It's just about fostering a diversity of experiences in this medium, and this whole gaming scene. Yes, network multiplayer allows for stuff like World of Warcraft, which we couldn't do with local, which is great. But I think, because there is so much of a focus on that, we have gotten a little complacent about how we play."

Wilson hopes the Sportsfriends compilation will make players realize something that they once knew, but the advent of online has perhaps made them forget.

"It is worth walking down the street to your friend's house to play games with them," Wilson said. "It is worth getting folks together, and throwing a game party over the weekend."

Check out the Sportsfriends Kickstarter page for more information on the four games included in the bundle, as well as the rewards donors can earn: a list which includes alpha versions of each game, or even a complete 18-player Joust set for high rollers.