The next Mega Man game is an odd one. It's free, strictly for Windows PC (for now), a crossover with the Street Fighter universe and conceived by a Capcom "superfan." It's also something of a "mea culpa" from Capcom to longtime fans who might still feel stung by the dual cancellation of Mega Man Legends 3 and Mega Man Universe.

Street Fighter X Mega Man, announced this past weekend and planned for release on Dec. 17, is in some ways an attempt to make good on past promises from Capcom while celebrating the 25th anniversaries of two of the publisher's iconic brands.

"To some degree, there is a bit of a mea culpa here and part of the reason why I wanted to [release the game]," Capcom senior vice president Christian Svensson told Polygon in an interview. "It was a great way for us to build free content that people will enjoy, and in some way to make up for the lack of Mega Man that's been in the world in the last two years.

"We view that as important for the brand moving forward. We don't want to be completely silent."

Street Fighter X Mega Man was originally conceived by aspiring game developer Seow Zong Hui, currently a student in Singapore. According to a blog post from Capcom senior community manager — and self proclaimed Mega Man fanboy — Brett Elston, Hui pitched the idea to Svensson at this year's EVO fighting game championships, showing the Capcom SVP a "skeleton of SFxMM running on a laptop."

"My first reaction was just a giant goofy grin on my face," Svensson recalled of that demo, which consisted of a couple early level designs and boss fights.

Convincing the rest of Capcom, both in the United States and Japan, to sanction an official release of the game, was slightly more difficult.

"We had to do legal agreements with all of the members of the team," he said. "Anyone who contributed anything to it. We had to speak to the gatekeepers of both brands to get their sign off on the concept. And of course I had to talk to my boss as well, who is responsible for both R&D and global publishing, and get him to say 'Yeah, I get it.'" 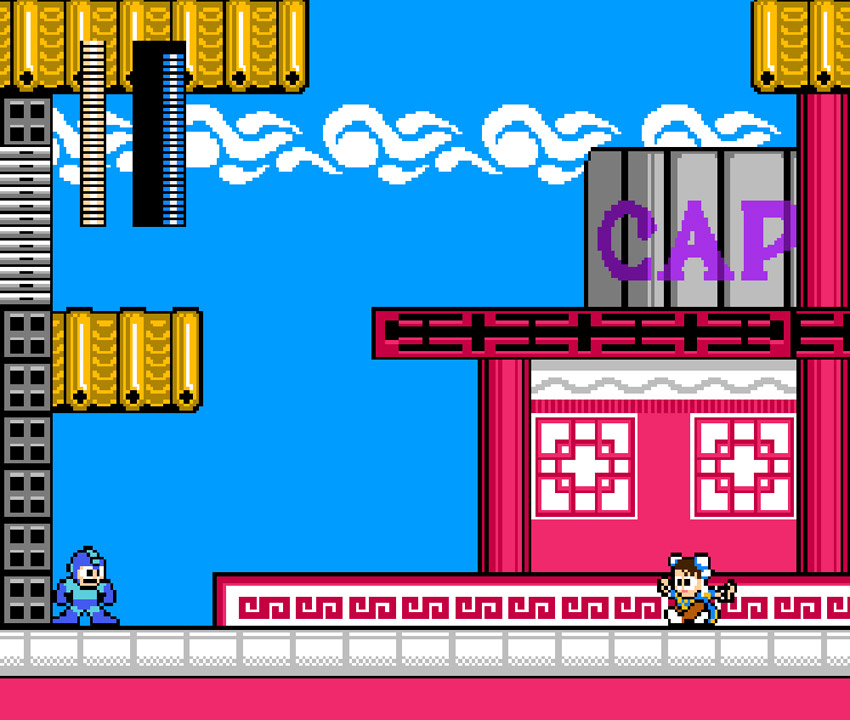 "There was no antagonism on either side," he said, calling Street Fighter X Mega Man "one of the more smooth development efforts I've seen. Once people signed off on the general concept, [Capcom Japan] left us to it, which suited us quite well."

Currently, the game is planned as a free PC download, with no plans to bring Street Fighter X Mega Man to consoles. Svensson said that decision comes down to two key reasons: cost and established legal agreements.

"We may look at it on other open platforms," Svensson told Polygon, with Mac, Linux and iOS "potentially" on the table. "At this time we're not looking at bringing it to consoles in any form. Obviously certain consoles are not receptive to free content and while people may be willing to pay for it, the act of collecting revenue for this adds extra complexity for us on the legal side.

"The cost of bringing a product like this to consoles, even if we were to charge for it, is not insignificant to say the least," Svensson said. "It's a lengthy process and by the time we got it there, by the time we released it, they might not be as interested in paying for it at that time."

Svensson explained that the last two traditional Mega Man console titles, Mega Man 9 and 10, were "reasonably successful" for Capcom, but that "everything costs a lot more than you think it does" to make.

While that may not sit well with Mega Man fans who would prefer to play the new game on a console, Svensson and Elston are quick to point out that Street Fighter X Mega Man should support PlayStation 3 and Xbox 360 controllers through a USB connection. They also stress that this is a free, full Mega Man game: eight themed worlds, eight bosses — Ryu, Chun-Li, Blanka, Rolento, Crimson Viper, Urien, Rose and Dhalsim — and a little something extra "in the typical Mega Man fashion."

"As recently as this week, we've been talking about some of the hidden things we might sneak into the game in the remaining time we've got left."

Capcom will release the game exclusively through its Capcom-Unity website, an effort to keep track of game downloads and gauge community response.

"There are so many generations of fans that one game can't possibly solve everything," Elston said, "but this is a step in the right direction. And hopefully a sign of intent on our part that Mega Man is still alive."