Persona 4 has stood out from the crowd of generic fantasy RPGs since its 2008 release on the PlayStation 2. With its modern setting and odd mix of dungeon crawling, mystery solving and high school life simulation, there's no other RPG like this (outside of other Persona games). And it's never been in better form than with Persona 4 Golden.

This Vita remake adjusts the combat and piles on a load of new characters and scenarios, adding tens of hours to Persona 4's already lengthy runtime. But it doesn't just earn attention by being unique or long; Persona 4 Golden is a genuinely fantastic game.

From the well-developed characters and storylines to its satisfying strategic combat, Persona 4 Golden is full of systems that have been polished and optimized even beyond the strong base of Persona 4. Every mechanic is intricately connected, and all of it feels better than it ever has. 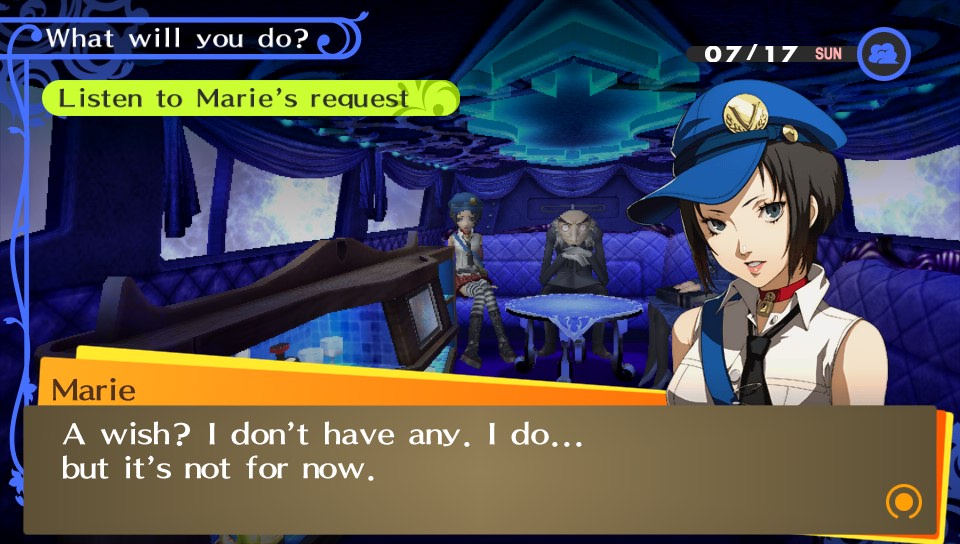 Welcome to the velvet room

While Persona 4 Golden has a lot of story additions, including several new social links, new character Marie is the most important. This mysterious amnesiac has the ability to create skill cards but hides even greater secrets if you help uncover her past. Building Marie's social link to the maximum level unlocks a huge chunk of bonus content, including some shocking twists that actually tie up loose ends in the story better than the original Persona 4 ending.

Persona 4 Golden begins with the mute, teenage protagonist's arrival in Inaba, a sleepy, rural Japanese town, where he is moving in with his uncle and cousin for a year. The trip takes a turn for the dramatic when Inaba is rocked by a series of bizarre murders. The main character and his growing group of high school buddies find themselves at the center of the case, tracking the killer while learning how to use strange new powers. 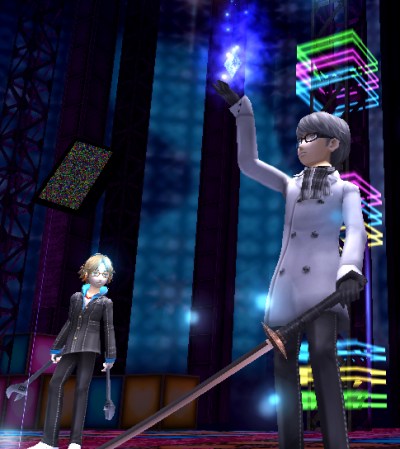 Persona 4 Golden splits its time between progressing the story in a wordy, visual novel/social sim and building characters through challenging dungeon crawls. The former is the meat of the game, but the RPG combat deserves some credit.

You can travel into each dungeon with up to three friends who will fight alongside the main character in turn-based battles. Each character comes equipped with a persona — a summoned deity that grants them the power to cast spells. While other party members are stuck leveling up the same persona for most of the game, the main character can collect and switch between a small army of these powerful forces.

With over 100 personas to hunt down, finding and leveling the perfect one turned into a Pokemon-style addiction for me. Each persona and each enemy has different elemental strengths and weaknesses that must be balanced. The quest for that perfect ally is aided by the ability to fuse as many as six personas together to create a new one that inherits abilities as well as the new option to grant powers via skill cards. It's an incredibly complex system — intimidatingly so at first — but the depth allows you to come up with fun, clever solutions that can make your characters nigh-unstoppable as you come to understand the game's inner workings.

While Persona 4 Golden requires a bit of grinding on the normal or higher difficulty setting, Atlus has made a number of tweaks to the combat system to cut down on the need to re-run older dungeons. The revised "shuffle time" mechanic is particularly helpful. At the end of successful battles, you have a random chance of being presented with a group of cards to choose from. Each card comes with a positive or negative effect — such as halving the money you win from that battle or healing your party for a small amount. If you play the cards wisely, you can accrue bonus draws, increase your experience gain and keep your party's health and skill points topped off during lengthy dungeon sessions. While the cards dealt are random, there's just enough strategy involved in most shuffle time sessions that I felt brilliant when I managed to keep up a streak of great card picks.

Dungeons also feature one of Persona 4 Golden's few concessions toward its new handheld form. In the PS2 version of the game, death would mean starting over from the last save point. In Persona 4 Golden, you're given the option to start over from whatever floor you died on, which makes the occasional fatal mistake significantly less frustrating. It's still possible to lose 15-plus minutes of progress if you're not careful, but compared to the hour or more you could get set back in the original game, it's much more friendly. 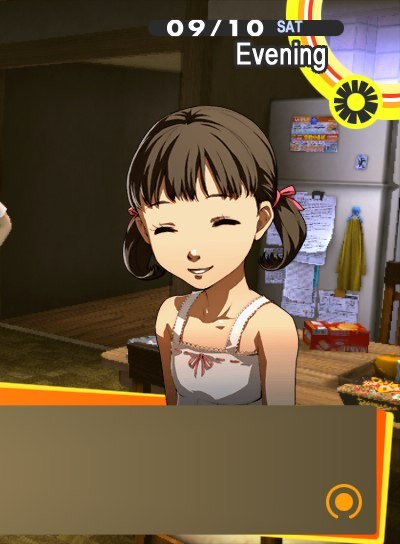 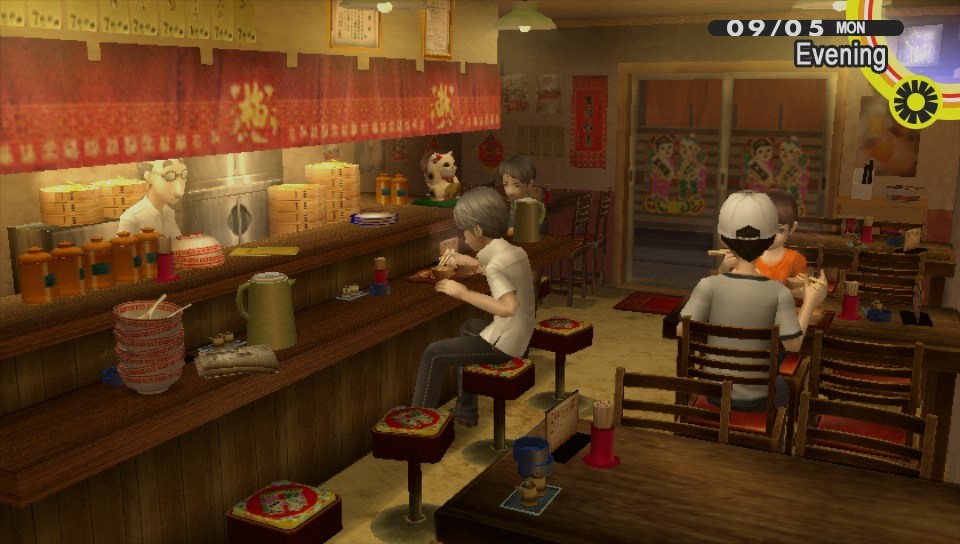 There's some irony to a massive, time-sucking single-player experience that has a message about connecting with other people, but Atlus at least pays lip service to turning it into something more social in Persona 4 Golden.

With the "vox populi" feature, you can tap a button during your free afternoons and evenings, and the screen will populate with word bubbles letting you know how other players online chose to spend their time during that day. It can give you hints as to who's free to hang out with or just allow you to laugh at the fools who wasted a day trying to get a prize from the capsule machine.

In dungeons, you can connect to other people via the "S.O.S." button. Hitting this sends out a signal to other players currently online and in a dungeon, who can then lend you their support by tapping a button to respond. When other players respond to your signal, you're rewarded with messages of support and minor heals. The feature can be a godsend in difficult situations, but you'll need to use it constantly to recover a serious amount of health, and you have to pause for several seconds to send out the signal each time. It would be more useful as a toggle rather than an ability that needs to be activated repeatedly.

Outside of the dungeons, Persona 4 Golden focuses on a plot full of the absurd situations and moral lessons common to anime. It's paced less like a traditional mystery game and more like a multi-season TV show, complete with tons of side characters with their own stories and occasional breaks from the main plot for stand-alone adventures.

It can feel ridiculous to go hours on end without any combat — such as in the slow introductory sequence — but Persona 4 Golden earns its long-windedness by way of entertaining writing and strong character development. From the meat-obsessed kung-fu addict Chie to the struggling trombone player Ayane to the overworked cop/father Dojima, these characters have interesting and memorable quirks that blossom into depth.

Even in its story sequences, Persona 4 Golden works in some player control by forcing you to make difficult time management decisions. In addition to going to school every day, you need to decide what you spend your time doing after school and in the evenings. Should you hang out with your new friend Yosuke, spend the afternoon at basketball practice or blow off fellow students to study for an upcoming test? All of the stress and excitement of high school has been broken down and reimagined through the lens of an intricate RPG system, whereby your friendships (known as "social links" in the game) level up as you foster them.

Though some of its themes are retreads of shallow anime/Japanese RPG clichés — including the game's central premise that the bonds of friendship grant (literal and figurative) power — Persona 4 Golden also handles some serious topics in an intelligent, thoughtful manner. The social links explore issues such as the difficulty of dealing with the death of a loved one, children being raised by television and teenage confusion surrounding sexuality. The resolutions to these stories are almost always upbeat but not in a way that oversimplifies the problems or talks down to the audience.

Like its cast of cheery high school students, each of the systems at work in Persona 4 Golden are dependent on each other. The dungeon crawling and social sim aspects seem like entirely different games at first, but it isn't long before they start affecting one another. Building up social links unlocks more powerful abilities and personas, while being equipped with the right personas lets you build strong social links faster. Story and gameplay progress link up to form a satisfying loop where the main character becomes significantly more powerful the more his friendships grow.

Persona 4 Golden is more than a retread of past glory. It takes the core story and formula of the original Persona 4, but it builds on it in myriad brilliant ways â from the much more welcoming combat mechanics to a story whose few plot holes have been filled. It's the tightest, best-written, and most must-play game Atlus has ever created. Persona 4 started as a strong, singular RPG; with Persona 4 Golden, it is a masterpiece.