This generation has seen a lot of co-op shooters and a lot of near-future military shooters, but Insomniac still believes Fuse can stand out from the crowd. To help with that goal, they have just announced the new Echelon mode, which Insomniac president Ted Price refers to as a "co-petitive" mode.

Price explains that Echelon will have you teaming up with buddies to take down AI opponents, like in the campaign, but you'll also be competing with your friends for certain reward. Co-op plus competitive: co-petitive.

Strange word choice aside, you might sooner recognize Echelon by another name: horde mode. This is a 12-round, wave-based trial, like those seen in many other shooters, but again Insomniac believes it can stand out. They're focusing on offense rather than the defense, and each round rotates between a number of randomized objectives.

you might recognize Echelon by another name: horde mode

Sometimes your objective will be as simple as killing all of the enemies or a specific enemy V.I.P. Other times you'll need to protect positions from enemy advancement or fight for territory. The change-ups provide a nice element of randomness that should help prevent repeat matches from getting stale. Whatever you end up with, though, rounds six and twelve are saved for tough boss fights.

Playing Echelon nets players with two rewards. First there are Fuse points, the game's version of experience points. These allow players to unlock skills along separate trees for each character. Progress on these trees is shared between Echelon and campaign modes, so anything you do in one will help you in the other.

The other form of currency is Fuse credits, and it's exclusive to Echelon mode. Credits actually appear as cash in the world — giant, arcade-style coins, money bags, and gold bars that explode out of defeated enemies. This is one area where the competitive part of Echelon's "co-petitive" formula comes in. Whoever rushes over to grab Fuse credits first gets to keep them. Between matches, they are used to buy gear, team perks, and more. 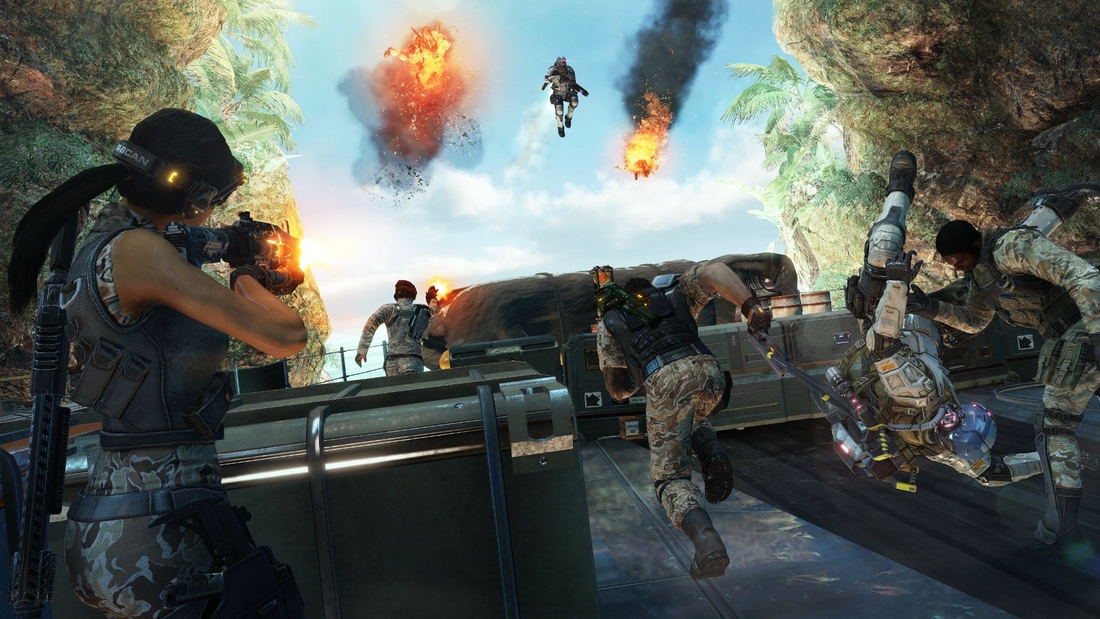 I was able to test out a match of Fuse's Echelon mode with some strangers. We played on a dock map, with various raised metallic levels and a boat floating in the middle. I took on the role of Izzy Sinclair, a spunky soldier equipped with a shattergun that can crystallize foes.

Though Fuse features traditional cover-based shooting, I quickly noted how different its shooting feels than, say, Gears of War. When you shoot at bad guys, a life bar appears over their heads, almost like out of Borderlands. Enemies can take a lot of fire, with bigger foes requiring real teamwork to even put a dent in them. I spent a lot of time cowering behind Dalton Brooks, the tank teammate who is able to create a mag shield that protects himself and allies from enemy fire.

This brings up one major concern that I have with Fuse. Since the four-player team in Echelon mode mirrors the four characters on the squad in campaign mode, only one of each character type is allowed in each map. In other words, not only do you need three friends to properly play this mode, but you'd better hope that all four of you just happen to build a preference for four distinct characters (or don't mind playing musical chairs).

At least you won't have to worry about it being too easy. While my team of random players was able to form into a relatively well-rounded team in the 15 minutes we played, the mini-boss at round six proved unstoppable. He absolutely demolished us, at which point an EA representative pointed out that we were playing on the easiest difficulty available. Yikes.

Though I'm still not entirely sold on Fuse standing out from its very similar-looking peers (or the word "co-petitive"), Echelon mode did quickly gel into a fun time for the brief period that I played it. With only six total maps, time will tell whether there's enough meat for interest in Echelon to last.