Adventure Time: Hey Ice King! Why'd You Steal our Garbage?! is a video game adaptation of the Emmy Award-winning show, but more than that, it's an ode to a type of gaming that doesn't really exist anymore.

Adventure Time creator Pendleton Ward's influence can be found throughout the game — in its endearing writing, its smart jokes and cleverly deliberate abuse of videogame tropes. His most obvious impact is in the game's look. The cast of odd characters are all minutely detailed, their animations fine-tuned to recreate the experience of the show.

Ward's influence and love of the medium also impact the game design. Hey Ice King! recreates the feel of an '80s classic so faithfully that the game's charm is bogged down by the tedium of actually playing it.

The premise for the game is as fantastical as any from the show: Rambunctious child adventurer Finn and his shape-shifting dog/brother Jake awake to find that someone has stolen all of the garbage from their yard. They decide to track down the Ice King, a trash-talking (and -stealing) villain who wants to use all of the garbage from the Land of Ooo to build a Garbage Princess. The plot may be absurd, but Ward's smart writing and use of gaming cliches as inside jokes make story one of the highlights of the game.

Players control Finn as he wanders across four different regions of the Land of Ooo from a top-down view. When he arrives at a location, the game shifts to a sidescrolling perspective, and the duo can interact with items and talk with the cast of the game.

Whenever Finn bumps into one of the tiny enemies wandering the world map or kicks off a quest-related battle, the game shifts back to that 2D, sidescroller perspective. In this mode, players have to either defeat all of the enemies in the area or move across the level to an exit. 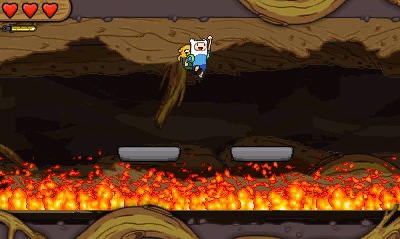 Finn relies on his sword to smack enemies into submission. As you progress through the game you begin to unlock some of Jake's special powers, such as a giant, ground-pounding fist or shield-shaped ear. While you can use the shape-shifting dog's special abilities in combat, most enemies only require a few swipes with the sword to dispatch; I rarely resorted to calling on Jake. Almost every battle felt like an uninspired button-masher. I found myself avoiding combat not because I thought I might fail, but because I knew I'd be bored.

Players can also use myriad items in combat, all callouts to the show. The Everything Burrito bestows health. Baby Shoes increase your movement speed. Habanero's fireballs temporarily give you access to new attacks. These items appear so frequently and are so rarely needed that it's easy to overlook them until the end of the game, when they're almost required to muscle your way past the final boss. 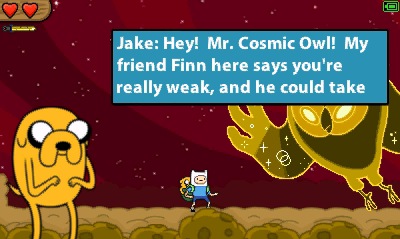 I found myself avoiding combat because I knew I'd be bored

The enemies and non-playable characters in Hey Ice King! all come from the show and offer a temporary reprieve from the sameness of combat. Throughout your adventures you'll come across long-tongued licking rocks, candy zombies, skeleton butterflies and, of course, penguins. It's a diverse crew, but the repetition of impromptu battles and the limited attack choices drag the experience down.

The shallow gameplay is made worse by the game's missions, which are essentially drawn-out fetch quests that have you ping-ponging across the map — albeit a surreal, colorful map — visiting and revisiting the same characters to move the story along. 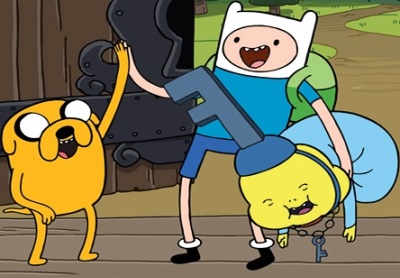 Developer WayForward attempts to add a bit more depth to the game with simplistic crafting and leveling systems. Players can combine different food items by dragging and dropping them onto one another in the inventory screen. This results in an entirely new piece of food, but the game provides no explanation of what the created item does. The leveling system is equally half-baked, affecting only basic stats like health and speed. Both systems feel tacked on to the main experience.

Even with the monotony of battle and constant return trips across the map, the game's many little jokes and visual goofs propelled me to the ending. It's an ending that provides the sort of challenge and change that could greatly improve the rest of the game. The sudden spike in creativity and difficulty in the final act inspired me to start playing through the game a second time in new game plus. But even with rebalanced difficulty, the insipid repetition turns the game into a grind.

Adventure Time: Hey Ice King! Why'd You Steal our Garbage?! isn't as satisfying an experience as its parts should allow it to be. Its genuinely funny moments are powered by insightful perspective on gaming's many cliches, yet it does very little with that knowledge, settling for shallow, repetitive gameplay. Hey Ice King! eventually delivers Adventure Time's trademark "beautiful moment," but only fans of the show are going to have any appreciation for that.