Code of Princess is a bad role-playing game masquerading as parody. It's a platter of half-finished ideas glued to the typical party-of-heroes-saves-the-world structure seen in most Japanese RPGs.

And it's not just the structure. Code of Princess rolls up every RPG stereotype and cliché imaginable. Its cheesy dialogue pokes fun at genre staples like leveling up and farming for experience points, but shallow characters and a jerky plot yield a lackluster story. The equally boring beat-em-up mechanics are tedious and repetitive.

Although Code of Princess features briefly entertaining caricatures of the life-or-death hyperactivity that Japanese RPGs are known for, it's an embarrassing homage at best.

The colorful cast of Code of Princess is brought together by main character Princess Solange. The titular Princess assembles the ragtag gang of misfits while traveling the world on a quest to stop an evil queen. All of the usual suspects are here: You've got the scantily-clad heroine, the tomboyish thief, the surly mage, the obnoxious bard, the token damage-soaking tank, the samurai, the stern mother figure, and the furry.

Code of Princess is self-aware. It knows its roots: stereotypical RPGs stuffed with overdramatic archetypes and worn clichés. The script's attempts at humor work sometimes, eliciting a few chuckles with lines like "We really need a healer and, no offense, but you're a bard," and "You could farm XP all day and still be useless."

But Code of Princess' merry band of job class stereotypes is underutilized in the gameplay. The single-player campaign limits you to one character at a time. Once a character's introductory level is completed, they can be used in all subsequent levels. While the cutscenes present a group of oddball personalities traveling the world, your teammates provide no backup or AI-driven help within levels — a tweak that would have improved on the story, lessened the grind and helped during the game's overly difficult boss battles.

Aside from those cheap boss battles, Code of Princess presents very little challenge. The game's quest system is dull to the point of monotony. Each quest is split into an individual level that opens with a cutscene, progresses into a battle segment and either ends with another cutscene or directly after defeating a boss. Opponents spend whole battles running blindly into set pieces without moving to attack. 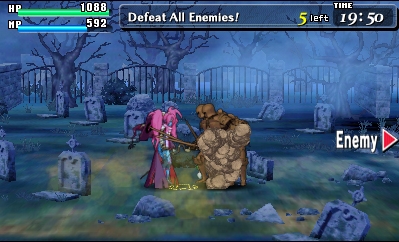 Despite its obsession with RPGs, Code of Princess' levels play out in classic beat-em-up format, with each character using their own established skillset. Attacks can be chained together for a string of hits, but failure to chain leads to an awful cooldown time. Combat breaks down into mindless button-mashing as you slog through a relentless tide of enemies.

Don't expect a better experience in multiplayer. The terrible enemy AI doesn't improve for co-op quests. Versus mode offers ranked and free play versions as well as an "ultimate" mode, but the only difference is the presence of leaderboards in ranked play. Matches are blitzed through in under a minute and yield virtually no experience points or items as rewards, much less any fun.

Of course, that's if you can get Code of Princess' multiplayer to function at all. It took as many as 10 tries to find lobbies that a friend created. Even starting password-protected lobbies didn't help. The game's multiplayer simply doesn't work most of the time and isn't worth the effort the rest of the time.

When Code of Princess tries to be an RPG, it's dragged down by minimal character development and choppy pacing. When it tries to be a beat-em-up, it suffers from boring combat. The JRPG genre is ripe with overused characters and plot points worth joking about, but the game's lazy mish-mash of half-assembled ideas rarely made me laugh. Code of Princess wants to be a clever parody, but it never rises above the level of shameful mockery.