"If there's anything that I'm really proud of in terms of the game, it's her," Holmes tells Polygon. "Not only her story that she goes on, her growth as a character, she's also someone that I think gamers are going to want to spend time with and get to know.

"She's not only very charming, but she's incredibly useful in combat. That was important to make sure that it didn't feel like one long escort mission, it was important that Liz felt like your partner and you're going on this journey together and she's going to help you."

One of the traits that makes Elizabeth work as a character, based on the first few hours of BioShock Infinite we recently played in Beverly Hills, was her pathfinding behavior while walking the expansive, winding world of Columbia. Elizabeth is programmed to be predictive of the player's movement, seemingly leading rather than following.

"That was months and months of work," Holmes says. "The moment Liz frustrates you as a game, nothing matters. She's so central to the story and such a big part of it, if you ever get annoyed with her, it's over."

Elizabeth quickly feels instrumental to the development of the game's narrative and its strategic gameplay. Her role in combat is just as important as BioShock Infinite's arsenal of weapons and selection of Vigors, the superpowers analogous to the Plasmids of the original BioShock. Elizabeth will frequently toss Booker items she finds in Columbia as you both adventure. She'll toss the player the occasional coin or magazine of bullets. Later, she'll open tears in the fabric of reality, offering the player strategic choices in the heat of battle.

Holmes says we'll see Elizabeth evolve over the course of the game, transforming from a more modestly dressed young girl into the more revealing heroine seen in the game's debut trailer and BioShock Infinite's marketing material. 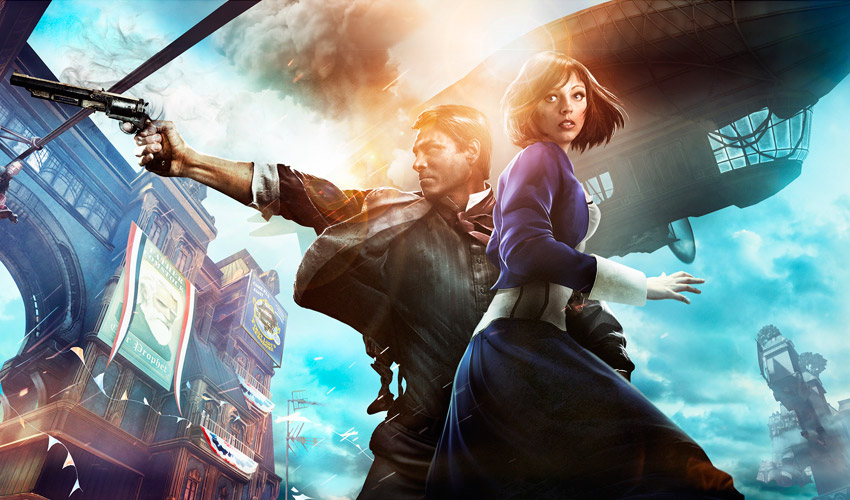 "She's going to change, not only physically, but emotionally," he says. Her appearance, Holmes notes "is really integral to her transformation as a character, but that's a story element we're keeping under wraps..."

BioShock Infinite's many layered mysteries — including the changes Elizabeth will undergo over the course of the campaign — are crafted to result in well-answered payoffs, Holmes says, something that the writing team at Irrational has carefully considered. While many story threads are introduced early and often, players won't be left hanging.

"For me, my favorite stories are the ones that at the beginning of the game, give you that big question, but also set a lot of hooks in you," he says. "They make you want to continue on a journey to see where it goes. We've done our due diligence in never raising a question that we're not going to answer - or at least leave something that's up to the player's imagination what the answer is."

Holmes also addressed the role player choice will be implemented throughout BioShock Infinite's story, choices that aren't as binary as they've been in the past. In one earlier occurrence of choice, players are asked whether they'd prefer to assault a biracial couple or the stage announcer whipping a crowd into a frenzy as they watch the barbaric act. While the immediate outcome is clear, the longer term benefit to the player is not.

"Looking back at the central choice of BioShock, harvesting Little Sisters, it was really powerful the first time, a little less powerful the second and by the end of the game, you're not even thinking about what you're doing any more," Holmes explains. "It's just a gameplay choice. What we wanted to do in terms of choice and the moral gray area of Columbia is making players stop and think about the world they're in."

Players will get the chance to explore Columbia, be charmed by Elizabeth and struggle with BioShock Infinite's moral gray choices when the game is released on March 26.