Disney Infinity will be an open-world sandbox game that combines the best of Minecraft creation with the absurdity of Just Cause's over-the-top action moments, all in a child-friendly world populated by iconic Disney and Pixar characters, according to videos and images leaked to Polygon.

Described as a "gaming platform", Disney Infinity will pull from both Disney and Pixar's full library of movies and television shows over time, expanding the core concept of the game by releasing IP-specific playsets packed with new characters, settings, toys and building blocks.

The concept as explained in one of the videos we received, is to reinvent the way video games tell stories by handing off the controls to the players. Disney Infinity — which will run on a multitude of devices including consoles, the iPad and Android phones — will be unveiled in January to a gathering of press in Hollywood. According to the official, though somewhat-light-on-details invitation, the event will feature John Lasseter, chief creative officer of Walt Disney and Pixar Animation Studios and a principal creative advisor at Walt Disney Imagineering, as well as John Pleasants, co-president of Disney Interactive. The game is described in the invitation as a new "gaming initiative."

While the information in this report is confirmed by several sources and numerous videos and images, the design of the game could still be evolving and some of what we've discovered may not reflect the final game. Many of the assets viewed by Polygon came from early in the year.

What we saw of the game shows players controlling well-known characters from a collection of Disney movies, exploring wide-open expanses in cars, on foot, or by flying. The game, which seems to include split-screen mode, will support a plethora of ways to play including racing, shooting, building and destroying.

In the videos, players ran around together as different Disney and Pixar characters, hopping on top of structures, using ray guns, driving tanks in impromptu battles. 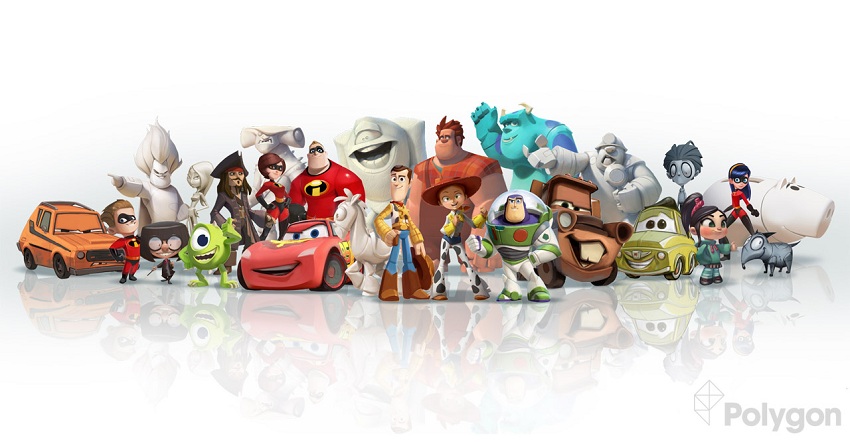 In one scene, Toy Story's Woody uses a "sticky hand" toy, Disney Infinity's version of Just Cause's grappling hook, to grab a passing plane being flown by Buzz Lightyear. The stretchy, neon-green leash attached to the sticky hand elongates, dragging Woody off his feet and into the air behind the plane. It's one of many examples of Disney Infinity's emergent gameplay.

In another, a player plants a toy slingshot in the ground and then uses it to shoot various explosives and toys at a distant block castle, eventually hitting a stack of red blocks which explode, knocking the building down. The scene recalls Angry Birds, Boom Blox, Wreckateer, but with a slick Disney touch.

A third scene shows a player crafting an elaborate racetrack with pre-created track pieces and then speeding along the creation as Cars' Lightning McQueen.

Not all characters will be able to do all things in the game. Some, for instance, will be able to ride mounts or drive cars, while others won't. The breakdown of supported actions include an eclectic mix of more than 30 abilities like invisibility, super damage, swimming and ranged combat.

While the game will include pre-created game modes, like soccer or king of the hill or even capture the flag, and pre-created cities and settings, a core value of the game is that players won't be forced to do anything.

A key point made in the videos is that this is a game designed to be around for a long time, a platform for play that will support the ever-growing cast of Disney characters.

There is very little mention of pre-created stories or missions in the game, but it appears that Disney Infinity may have both.

The experience of playing Disney Infinity looks like a more robust, open-ended version of Toy Story 3's amazing "Toy Box" mode. Unsurprising because Infinity is being created by the same developer and, while in development, went by the codename "Toy Box."

The game is being developed by Salt Lake City-based Avalanche Software, the studio behind Toy Story 3: The Video Game and Cars 2: The Video Game. Both of those games seem to have helped shape and inspire the creation of Disney Infinity.

The original concept for the game came from Toy Story 3's "Toy Box" mode, which offered gamers a very similar approach in the Toy Story brand. In that game, players could customize an ever-growing toy box and play with the characters of Toy Story however they wanted.

Developers say in the video that they sensed they were onto something with Toy Box mode and pursued creating a more realized version of that mode.

Disney Infinity, they say, is a way for people to play with all of the Disney properties any time, any place, across devices.

While it's unclear how cross-platform play will work or how many platforms will be supported, we saw the game in action on an Xbox 360, an iPad and an Android phone. In the case of the iPad and the phone, the gameplay seemed to be more about controlling characters and exploring the world. Only the console gameplay we saw featured building. 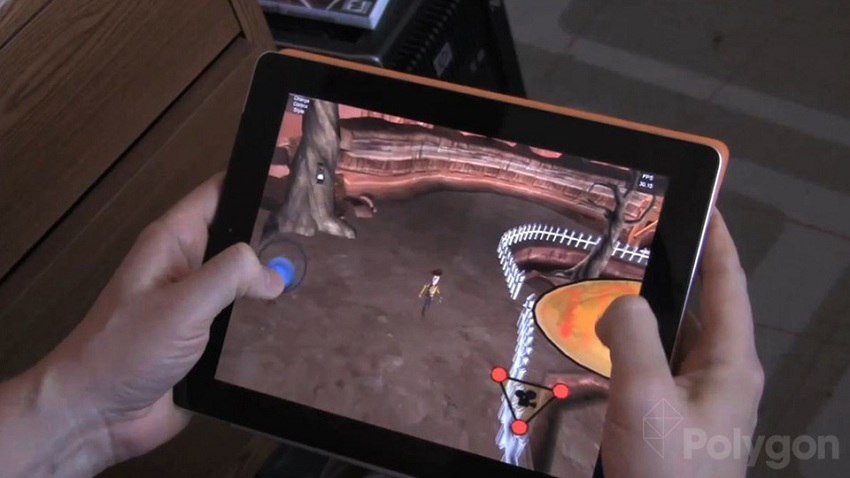 According to developers in one video, Disney Infinity will be broken into two major elements: playsets and the rumpus room.

The virtual playsets are themed after well-known Disney creations like Cars, Buzz Lightyear, Woody's Round-Up, The Incredibles, Wreck-it-Ralph and even classics like Peter Pan and Aladdin. They will include settings, backdrops, toys and action figures. It's likely that if the game comes with pre-created missions or levels, that those would be delivered with playsets.

While early rumors about the game mentioned that Disney Infinity would, like Activision's Skylanders, use physical toys as a way to incorporate characters into the game, none of the material we saw or the people we spoke with were familiar with that.

We did see reference to playing cards with character cost and attributes on them, but it was unclear if they would be physical creations or virtual ones.

The game's other major element, the rumpus room, is a big blank slate where a gamer can create virtually anything they want with both these themed playsets and toys that aren't from any playset. The rumpus room is likened to a child's bedroom, a place where you can dump all of your favorite toys on the floor and play with them. 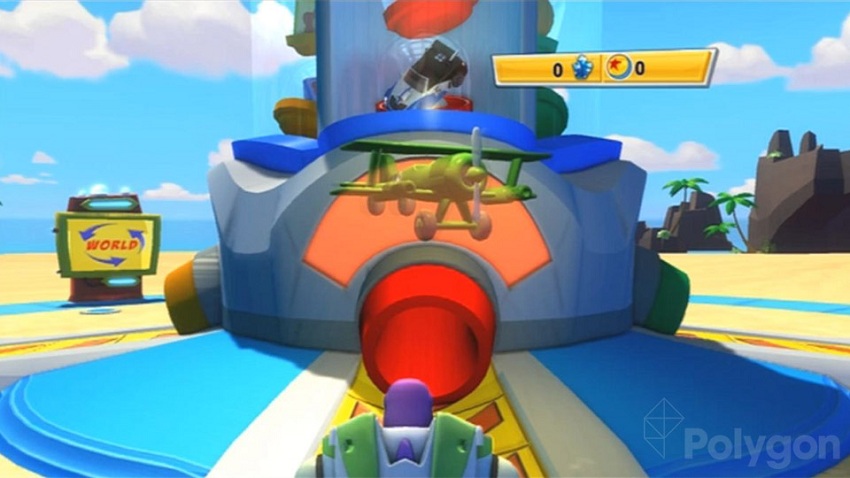 It is in the rumpus room where we saw players controlling a Buzz Lightyear. In the video, Buzz walks up to a capsule machine, selects an item from a menu and the item drops out in a capsule. When he tosses it, it pops up and becomes what he ordered.

Other bits of the video show characters dropping massive building blocks to create castles, running around inside a highly detailed city as the buildings grow and shrink, change shape and float. Some of the settings seem relatively bare of detail, while others were minutely detailed.

A key point made in the videos is that this is a game designed to be around for a long time, a platform for play that will support the ever-growing cast of Disney characters.

The idea of creating a base platform for open-ended play and game creation and then populating it with a stream of playsets seems like a perfect match for Disney. My time spent with Toy Story 3's Toy Box, a much smaller version of Disney Infinity, felt like it delivered an experience both playful and fun; lighthearted in its approach, but expansive in its potential.

Disney Infinity seems like a smart expansion of that idea.

Update: Check out our live coverage of the Disney Infinity reveal in Hollywood.