Rush Bros. brings the beat as a music-driven platformer

Share All sharing options for: Rush Bros. brings the beat as a music-driven platformer

At first, Rush Bros. wasn't about the music. It was the race. Two brothers locked in competition, dashing faster and faster to crown themselves with power only one person can truly own. Victory.

Today, the gameplay of Xyla Entertainment's colorful, beat-based platformer looks a little different. Competitive play remains, but brothers became DJs. Platforms are laden with obstacles and traps ready to catch the sluggish player. Rather than the dubstep-heavy soundtrack the team originally envisioned, players can import their own music for an experience unique to the user.

It was music that helped mold the game into its current form, explained lead designer Ian Boswell. If players were going to create their own soundtracks, it needed to have some lasting effect on the game.

"This spark went off in my head," Boswell said. "What if the platforms were moving up and down, what if things were flipping, rotating and turning, and it's all going in time with the music? One thing became another. It was just a wildfire of ideas that spawned from that." 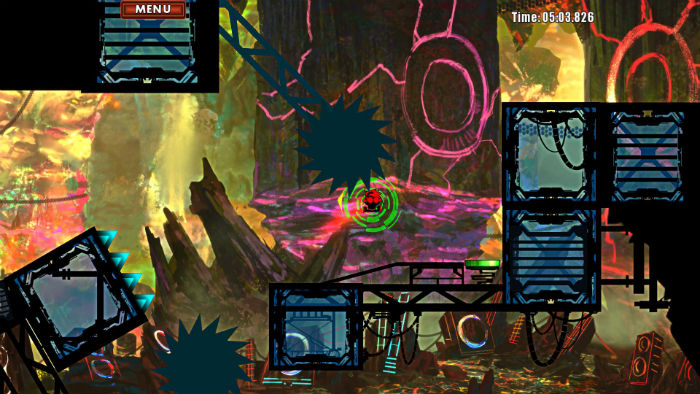 Beat would influence everything: platforms, traps, even the background itself. To Mark Chandler, the game's senior producer, it was the breakthrough the game needed to set itself above the crowd. It was, as he called it, "the McDonald's Secret Sauce."

"When you find that one last element, then you suddenly realize, ‘Oh my god, we have a great game,'" Chandler said. "That's when everything started coming together, and suddenly we realized we had a really awesome, outstanding game."

Rush Bros. is unique in its platforming approach because its response changes at the flip of a musical switch. Gamers seeking a challenge need only plug in something heavy and fast. Calmer, softer music will offer a more steady experience.

"You'll see your music directly influencing the game," Boswell said. "[Players] will have a harder time playing with a faster song."

But for those that love quick tempos and heavy baselines, Rush Bros. won't be impossible. There are limits to keep everything within a threshold, Boswell said. Any kind of music will work, as both Chandler and Boswell have found for themselves. Where Chandler is classic in his taste with ‘80s and ‘90s tunes, Boswell prefers the thump of British club music and techno, the retro call of chiptunes.

Despite the intimacy of choosing your own music, Rush Bros. isn't a game that's meant to be played alone. It's all about the side-by-side competition; of that both Chandler and Boswell agree.

Boswell understands this better than most — after all, it was his childhood influence that spawned the game. As a kid, Boswell watched The Wizard, a 1989 film where a boy faces off against his rivals in a video game championship. Like the kids in the movie, Boswell wanted a game race.

"I set two Nintendos up in my room and two television sets," Boswell said. " ... I'd attract crowds of friends from school into the room and they'd be watching us basically race through Super Mario Bros. 3. And it was so fun to do it side by side."

Soon it wasn't just Super Mario he and his friends were racing. It was everything under the sun, he explains.

Rush Bros. isn't complete yet, and with Xyla's desire to keep building, it may never be. Even now the team plans for post-release level-packs, maps, modes and more.

"We treat games like services," Boswell said. "When we put this out there, we're going to have a lot of updates, additions, add-ons, free DLC we'll give out to users that will greatly enhance the experience."

For now, Xyla's game is one of many titles patiently awaiting approval in Steam Greenlight. The plan was always to release on Steam, Chandler said, but like so many other indie devs today, it's not an easy path.

There's no telling how close they are to Greenlight success, but the team will continue to push the game out for a late January launch on Windows and Mac through their own channels. With or without Steam support, Rush Bros. will race forward.