Every year, students, hobbyists and professionals flock to Ludum Dare. Developers have gathered for a weekend to build games since 2002, when the original Ludum Dare took place. Ten years and 24 events later, competitions and game jams still run strong.

Indie developer Underground Pixel is no stranger to gamemaking. Holiday Havoc and Pastry Panic, known for their retro, arcade play-style are proof of that. Fresh off its second Ludum Dare jam, the developer is proud to present its latest title: Holly Jolly Pyromaniac, a holiday-themed title brainstormed and built in just 72 hours.

For a short time span, it was no easy task.

"At the end you're just rushing to make sure everything that needs to be in the game is there."

Two hours into Ludum Dare 25, Underground Pixel still had nothing. The team was blanking. The clock was ticking. It was Kevin Drew, the game's designer, who finally caught a spark of inspiration — elves in Santa's workshop staging a revolt. But in accordance with this year's theme, "You are the Villain," players wouldn't be the rebellious elves. They'd be Santa himself.

Underground Pixel wanted Holly Jolly Pyromaniac to have simple gameplay. While Santa soars over houses, players tap X to drop a bomb. All houses were fair game at first, but the team marked some off for an extra challenge. Purple houses contained the good, loyal elves, while green signaled an elf plotting to overthrow Santa. The longer the game runs, the faster Santa flies, and the harder it gets to correctly hit targets.

By hour 48, Holly Jolly Pyromaniac's pixilated art was complete. Programming on the game continued until the very last minute of the competition, when Ludum Dare's 72-hour time limit was up. And like the beginning of the competition, the end is just as crazy.

"It is very exhilarating at the very beginning and end," Drew said. "You want to get going right away and you're just trying to get a prototype together as soon as possible, so the thought process behind the design can be a little crazy. And at the end you're just rushing to make sure everything that needs to be in the game is there." 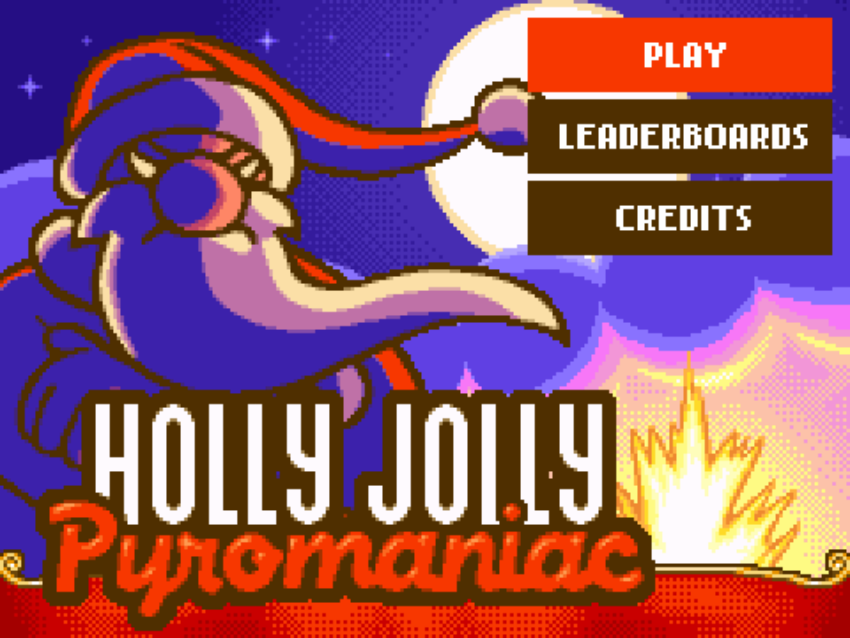 "We like to take our time with games and add more content than might be necessary," Drew said, "so events like Ludum Dare force us to make a game quickly and get it out the door. It's also very tough making a game in 72 hours without sacrificing quality. Our last entry wasn't quite up to par with our other releases, but I definitely think this one was. Experience helps a lot."

Ludum Dare 25 took place from Dec. 14 to Dec. 17. Holly Jolly Pyromaniac is available as a free download for Mac and Windows; you can also play it in your browser.