The first batch of downloadable content for crossover brawler PlayStation All-Stars Battle Royale will be steeped in PlayStation fan service both new and old. Two downloadable fighters, Kat from PlayStation Vita game Gravity Rush and Emmett Graves from PS3 game Starhawk, will be added to the roster in early 2013 along with a new stage that's part Heavenly Sword, part Wipeout.

We recently had a chance to play with an early alpha build of that new PlayStation All-Stars content at an event at Sony Santa Monica Studios, going a few rounds with Kat and Emmett on the stage that's a bizarre, medieval fantasy meets sci-fi mash-up.

In PlayStation All-Stars, Kat's fighting techniques stay true to her combat in Gravity Rush, focusing mainly on kicks. Kat's a heavy rushdown character, director Omar Kendall tells Polygon. Her suite of moves includes a dive kick that can be used to quickly cover distances, leading to up-close combos that can quickly trap foes in a deadly flurry of kicks and anti-gravity power moves.

Kat's gravity powers can draw in and damage foes in the form of a massive energy ball. She can also summon items from a stage (barrels, furniture) to encircle her avatar, then launch them at opponents.

Kat's super moves include a deadlier version of her slide kick at level one, followed by a move that fires two volleys of tracking, stalactite-like projectiles at level two. Her maxed out super move envelopes her in a black cat shroud that delivers deadly one-hit kill slashes and area of effect attacks.

In contrast to Kat, Starhawk's Emmett uses a series of long range attacks in battle. While Emmett can deliver close range punches and a ground pound launcher with limited reach, he's also armed with guns, grenades and mines. Emmett can summon supply drops during fights, calling down auto-firing turrets — a real nuisance — and a generator that emits AP (All-Star Power), the energy that fuels super meters. 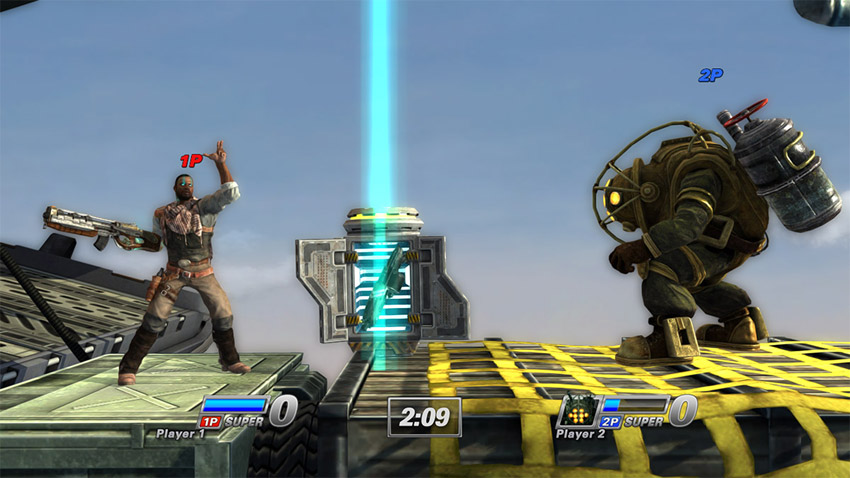 Emmett can also request drops for different weapons, a reference to Starhawk's "Build-in-Battle" system. In addition to his standard rifle, he can call in drops that outfit him with a shotgun or missile launcher, each with limited ammo that can be refilled from the supply drop container. Those containers can cause damage to other players as they fall, making Emmett an annoying force to be reckoned with.

While Emmett's level three super wasn't working in the build of PlayStation All-Stars Battle Royale demoed by Superbot Entertainment, his other super moves were. One modifies whatever gun Emmett currently has equipped, transforming the stock ammunition into an energy blast far deadlier. His second tier super calls down a massive supply drop, killing any enemy unlucky enough to be in its path.

Omar Kendall of Superbot tells Polygon that development on the two characters began "in earnest" about a month ago. Development, including tweaking and balancing Kat and Emmett's moves, will continue until the characters are released in 2013.

"We're just listening and we hope that people continue to let us know what they're interested in seeing."

"The characters are pretty much at the point where their moves are in, but not necessarily where we want them to be from a balance standpoint," Kendall says. "We're going to spend the next couple months really just making them fun, making them tight and playtesting every day.

"It's a matter of seeing how these characters hold up to the 20 characters that we launched with, that we've already had tons of development time and time to playtest. We want to make sure that they stand up to those characters as well." 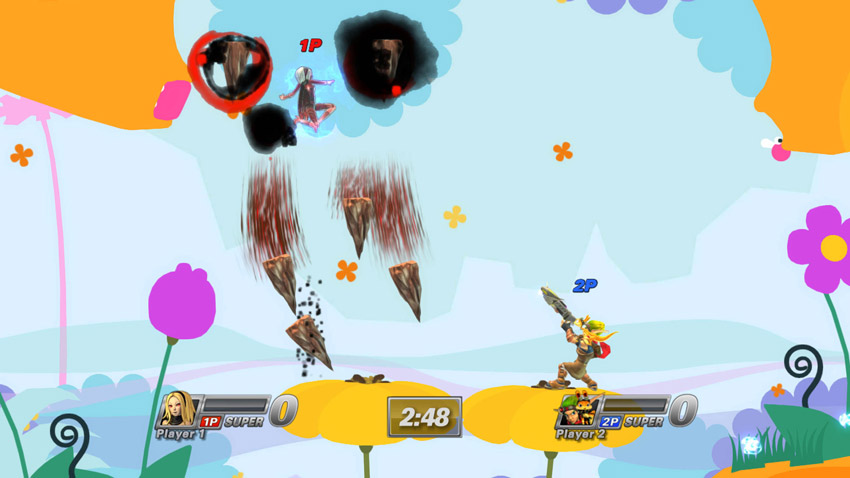 In addition to internal playtesting, Kendall says the team at Superbot Entertainment hopes to let the public spend some time with Kat and Emmett before launch. That may just occur at on location events, but the team is also toying with the idea of allowing the DLC to be played by a wider audience before its official launch.

"We even had a discussion about test servers," said lead designer Seth Kilian, "running a test server for some subset of the audience."

The design of those DLC characters, much like the potential means of testing them outside Sony Santa Monica Studios, appears to be up for discussion. Even while we were playing, Killian and Kendall bandied about design ideas and possible tweaks to the way characters played. The add-on seems very much a work in progress, one that Superbot seems intent on perfecting before Kat and Emmett are released.

The other component of PlayStation All-Stars' forthcoming downloadable content, the new stage that features a Wipeout race track cutting through a Heavenly Sword-inspired arena, is split into two parts. It begins atop a mesa reaching high into the sky. In the midst of a battle, that platform crumbles, sending players tumbling into a ravine bordered by a futuristic race track on one side. Any player unlucky enough to be punched or kicked into that track will find themselves electrified and stunned, then likely on the receiving end of a juggle.

"I'd love to bring the characters out to certain events. We'll see."

Opposite the race track is a two-level structure that players can jump up to in an attempt to avoid attacks — like Kat's homing stalactite super, for example — or to leap from — jumping from the second level and performing Emmett's ground pound increases its area of effect.

Kat, Emmett and the Wipeout-meets-Heavenly Sword stage will be released in early 2013 for the PS3 and Vita versions of PlayStation All-Stars Battle Royale. Kendall says the add-on will be free for a two-week period, during which players can download the add-on whether they own the game or not.

In addition to the promised character DLC, Kendall says the PlayStation All-Stars dev team is listening to player feedback and plans to continue to add new and improved features. Player requests for additional ranked modes, including one-on-one play, are currently under consideration. Further refinement of characters that may be over- or under-powered, including popular characters like Kratos and Raiden, are also being reviewed.

PlayStation All-Stars Battle Royale was released for PlayStation 3 and Vita on Nov. 20 in North America. The game's first batch of downloadable content is due in early 2013.