Ratchet & Clank: Full Frontal Assault presents developer Insomniac with a dilemma. What do you do with a series that's done everything? The lombax and his robot buddy have been around for ten years and, with the addition of Full Frontal Assault, 11 games (and one compilation).

Full Frontal Assault's solution to that challenge comes by way of stripping down many of the elements that made previous Ratchet & Clank games stand out. The goofy story and sense of humor? Reduced to a handful of short cutscenes and a rotation of in-mission dialogue quips. The weapon leveling that came to largely define the series? It's now a quick, hardly noticeable process. You can still use your hoverboots to glide through the air or slide along pipes, but platforming-focused sequences are now brief and infrequent.

The new core of the gameplay is a base defense meta-game heavily inspired by the tower defense genre. It's a strange fit for the series and feels particularly awkward in the single-player and co-op campaign modes. Aside from a balanced competitive multiplayer mode, Full Frontal Assault's attempts to try something new feel like change for the sake of change.

It's easy to get overwhelmed, and Full Frontal Assault's economy is lopsided in favor of the AI 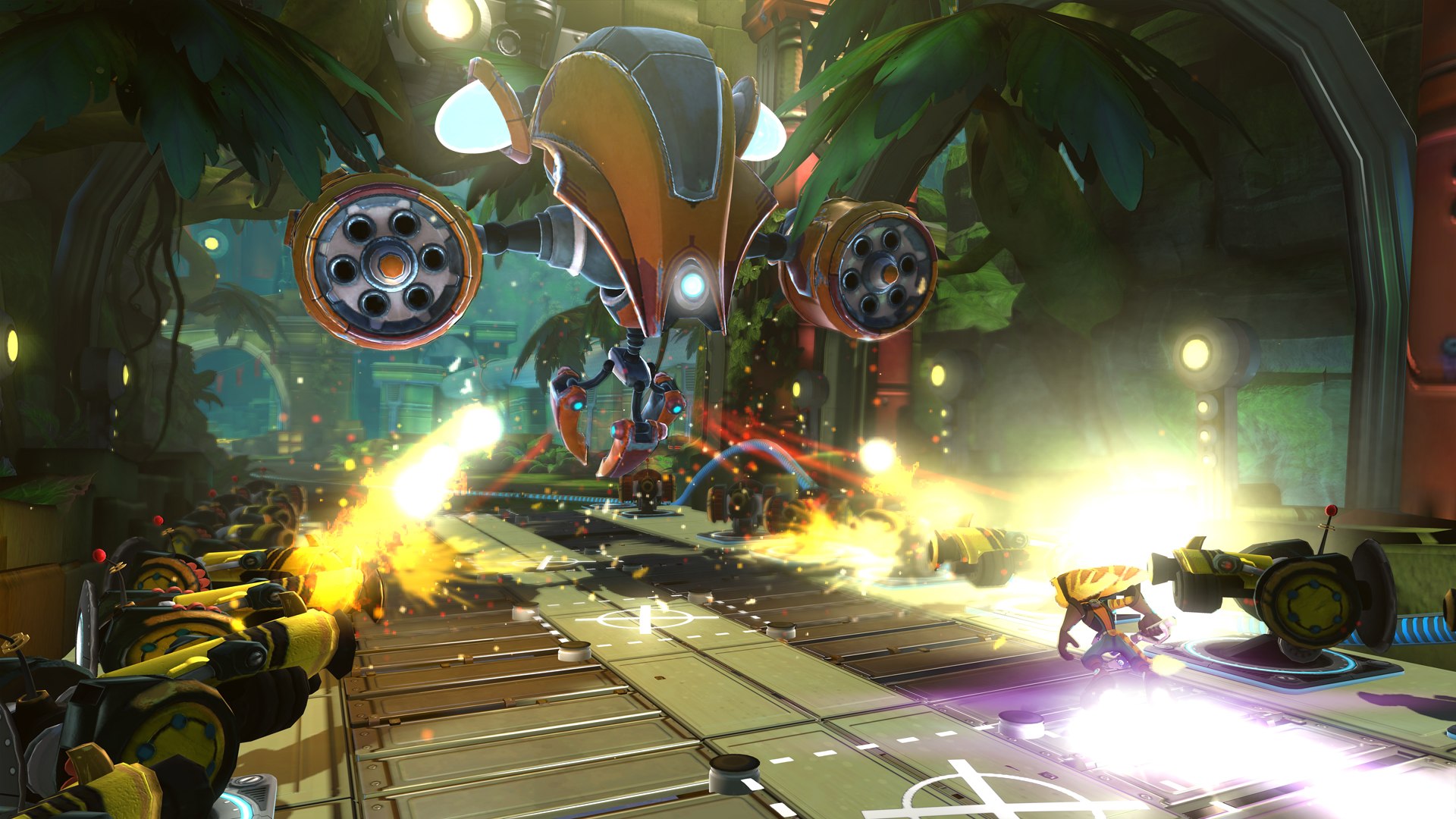 At the outset of Full Frontal Assault, Ratchet, Clank and series stalwart Captain Qwark have joined together to form Q-Force, a team dedicated to protecting the galaxy from alien threats. No sooner are they together than a mysterious new villain begins invading peaceful worlds. Ratchet & team hop back and forth between three different planets where they must balance defending a base against waves of enemies and pushing forward to assault the enemy stronghold and establish a more lasting planetary defense. 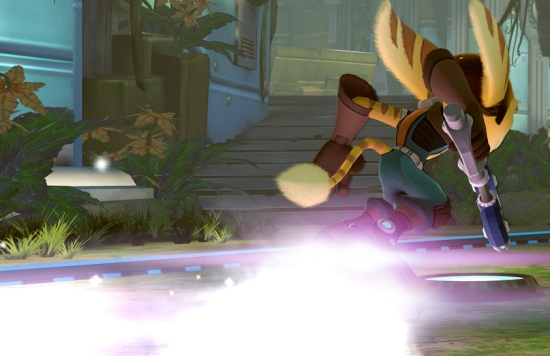 There's an uncomfortable balance between defense and exploration in Full Frontal Assault's campaign mode. You need bolts (the game's currency) earned from exploration and completing objectives in order to buy turrets back at your base, but leaving the base unattended while enemy waves are approaching is tantamount to surrender. Turrets and barriers fall apart at the slightest hint of enemy fire unless you're there backing them up, distracting bad guys and replacing busted defenses as needed. 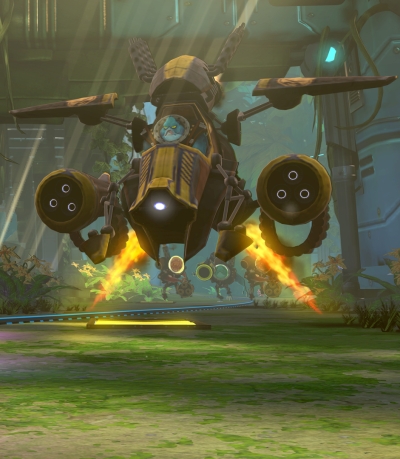 It's easy to get overwhelmed — especially when a column of enemy troops warps in and begins tearing up your base while you're on the opposite side of the map — and Full Frontal Assault's single-player economy is lopsided in favor of the AI. It takes thousands of bolts to buy a single worthwhile turret but defeated enemies and smashable objects rarely provide a fraction of that cost. 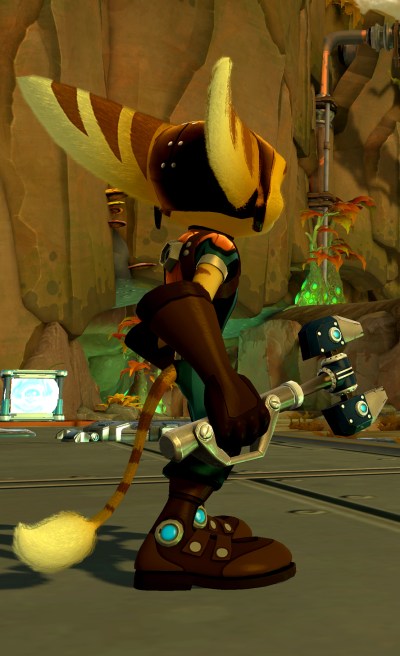 Really, this is all just a sign of one strong miscalculation: Ratchet & Clank: Full Frontal Assault should not have a single-player mode. The story campaign is so clearly skewed toward co-op that I found the last two missions impossible to complete solo. There's also no matchmaking for co-op, so if you don't have a friend to play local split-screen with or an online buddy who owns the game, you're stuck.

Assuming that you can round up a buddy, campaign mode is more tolerable but still not very fun. A bonus objective predicated on a time limit and respawning bad guys force you to rush through the small number of colorful worlds available, punishing exploration. The giant robotic bullet sponges that make up most of the late-game enemy waves are even more frustrating due to Full Frontal Assault's weird fixation on ammo scarcity — as if you're not balancing enough already.

Nothing in multiplayer is very unique, but it at least feels balanced

For all the failings of its campaign, Full Frontal Assault's competitive multiplayer mode works well enough. Played out in either 1v1 or 2v2 matches, teams begin on opposite sides of a symmetrical map and vie for resource points spread around the area. Matches are split into phases that dictate what activities you can perform. The recon phase allows you to hunt down and take over resource nodes, which yield bolts you spend during the squad phase, where you select which units will be invading your opponent's base. Then you try to aid that invasion while defending your own base in the assault phase. The phases repeat until one side's base is completely eradicated.

Nothing in multiplayer is very unique, but it at least feels balanced (unlike the campaign options). Turrets and barriers cost much less than they do in the campaign, and your enemies die a lot faster. A 2v2 match where both teams know what they're doing can go back and forth for quite a while but never feels like waiting out a foregone conclusion. Full Frontal Assault's baffling campaign mode would be less of a disaster if it borrowed some of the competitive mode's design choices.

As of launch week, the online community for Ratchet & Clank: Full Frontal Assault seems healthy, but I'm worried about its longevity. The game incorporates a league system, where you play five placement matches to determine where you belong in the regular league. But beyond moving up and down in the league, there's no real progression to the game — no weapons to unlock, no level ups (outside of in-match weapon leveling that is reset every time), nothing to look forward to. This setup keeps things balanced between players, but time will tell if it actually holds a community's attention.

The tight competitive multiplayer experience is a ray of hope in what's otherwise a rather depressing package. Campaign mode downplays the wide-eyed humor that was once the soul of the series, diluting it with a stressful, poorly balanced tower defense clone. If a lasting community builds up around the multiplayer, Rachet & Clank: Full Frontal Assault won't be a total loss for the franchise, but it's still full of signs that after 10 years the lombax might need a vacation.