Share All sharing options for: BioShock Infinite hands-on: Mysteries in the clouds

There's a sense of familiarity to the opening moments of BioShock Infinite: a fear of being lost at sea; an arrival at a desolate tower; a strange journey to a foreign, disconnected city. The parallels between 2007's BioShock and its undersea dystopia Rapture and developer Irrational Games' follow-up, BioShock Infinite, are made clear early.

And while there are also obvious differences — this time, we ride a rocket to the sky instead of a bathysphere down to the depths — we're reminded of BioShock Infinite's heritage from the moment we assume control of protagonist Booker DeWitt.

That familiarity may be a comforting start to players, as BioShock Infinite quickly has them juggle a volley of questions: Who is Booker DeWitt? Who sent him to Columbia? Who is Elizabeth, the woman he's been hired to recover? Who are these strange people who live among the clouds? And why, if this is the year 1912, is that barbershop quartet singing a Beach Boys tune that won't be recorded for another 50 years?

Like the references to Return of the Jedi in BioShock Infinite's debut gameplay trailer from 2011, there appears to be some time-space disconnect happening in Columbia. Or is it something else? BioShock Infinite opens with a quote about memory loss caused by trans-dimensional travel.

Columbia floats in high contrast to BioShock's Rapture. The airborne city is bathed in sunlight and surrounded by blue skies and soft, pillowy clouds. Its trees hang heavy with an abundance of fruit; its shrubbery bursts with bright red roses. Only the creepy cultishness of its citizens, seen praying before statues of George Washington, Benjamin Franklin, Thomas Jefferson and Columbia founder Zachary Hale Comstock, give an early sense of unease in this paradise. 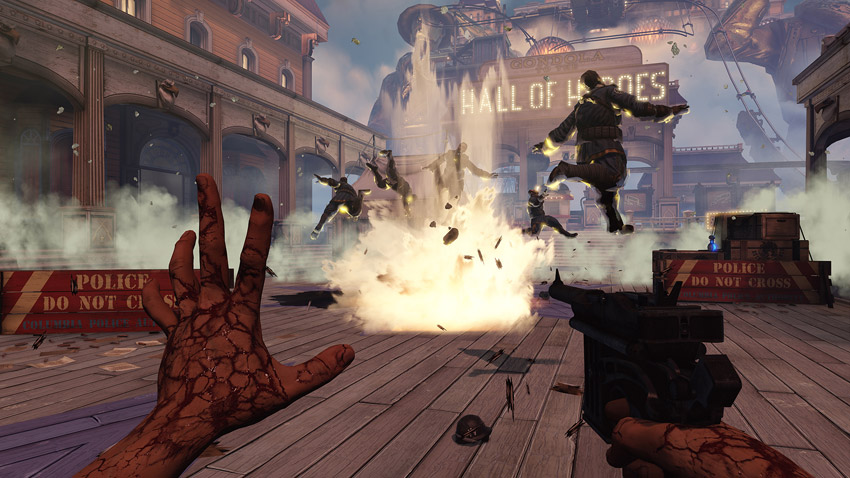 One of the earliest Vigors players will wield is Possession. The ability lets players take control of mechanical devices like vending machines or turrets, and later, allows DeWitt to possess humans. During the first few hours of BioShock Infinite, players will have access to a wide variety of Vigors, including Devil's Kiss, a fire-based power; Murder of Crows, which sends flesh-eating ravens at your enemies; and Bucking Bronco, a telekinetic skill that bounces targets in the air.

Using Vigors requires a supply of Salts, Infinite's version of Eve from the original BioShock.

DeWitt also gains another power that's different from his other Vigors. Early on, a mysterious couple offers Booker a Vigor that outfits him with a regenerating shield. That mystery couple returns later in BioShock Infinite, offering DeWitt choices with more shades of gray than the moral quandaries of the original BioShock. It's not made immediately clear why these binary choices — picking heads or tails on a coin flip, selecting a style of brooch for Elizabeth to wear — are important.

In addition to Vigors and weapons, DeWitt can also outfit himself with Gear, items of clothing with special powers, similar in function to the Tonics of the original BioShock. Here are some examples, not all of which we got to sample for ourselves while playing. 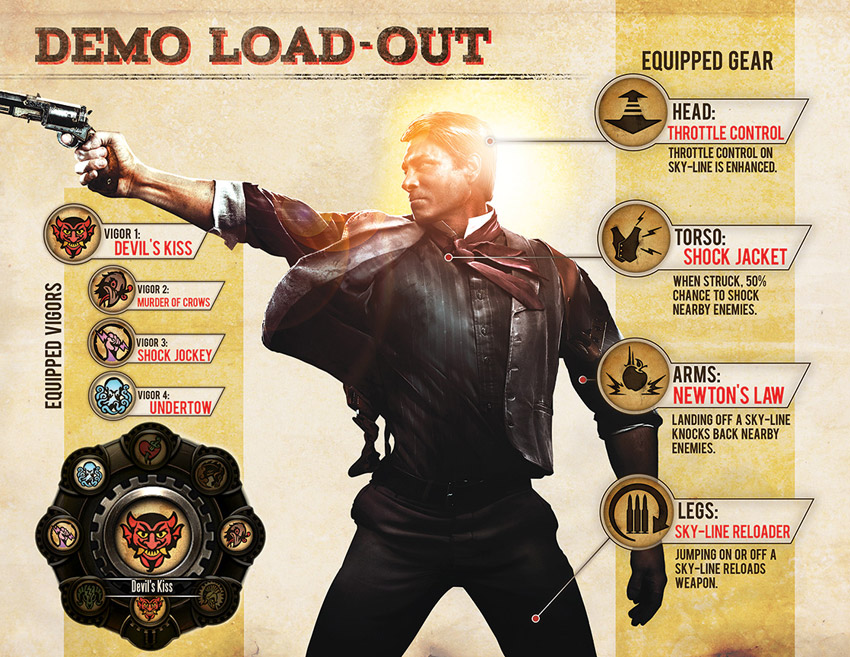 BioShock Infinite's mysteries deepen when players encounter Elizabeth for the first time. She's held captive, deemed a dangerous specimen by Columbia's overseers and guarded by the equally mysterious Songbird, her mechanical protector. Our introduction to Elizabeth highlights her interdimensional tear-opening powers: She opens a rift to Paris for a peek at the city where, in the background, we can see La Revanche du Jedi is playing.

The version of Elizabeth we see when she first meets DeWitt is different from the one we've come to know over the past two years. She's dressed more modestly and looks physically weaker. Irrational Games says that transformation to the Elizabeth we've come to know will happen at some point for reasons they wouldn't say.

Elizabeth is an able companion, helping DeWitt scrounge for money, supplies and ammunition to make their planned escape from Columbia easier. She's self-reliant and often leads the way as you walk through Columbia, an impressive feat of technical prediction on Irrational's part. You'll see her powers come into play over time, as well. By the end of our three-hour demo with Infinite, Elizabeth was just starting to open tears in space, pulling in supplies, turrets and skyhooks for Booker to latch onto. She's even something of a codebreaker. As DeWitt finds code books throughout Columbia, Elizabeth will help decipher secret messages left by the opposing faction, the Vox Populi, leading to new secrets.

Thanks to contributions like that, DeWitt's constant companion feels more like an asset than a burden. Even while riding the roller coaster rails of Columbia's skyline, Elizabeth keeps up.

While Infinite may share many analogs with its predecessor and boast similar emergent gameplay, thanks to the combination of gunplay and Vigor-induced super powers, the game appears to have the strength — steeped in mystery — to distinguish itself.