Army of Two: The Devil's Cartel's more serious tone is kind of a joke (and that's not so bad)

Share All sharing options for: Army of Two: The Devil's Cartel's more serious tone is kind of a joke (and that's not so bad)

If you ask EA what separates Army of Two: The Devil's Cartel from the two previous games in the franchise — both of which received rather lukewarm reception — the publisher has a strong answer. It says that The Devil's Cartel has a less over-the-top tone. It says the new setting of Mexico allows the game to explore the war on drugs, a conflict that EA strangely calls "more relatable" than those in the previous games.

And finally, EA will tell you about the new protagonists, a duo of newcomers to T.W.O. (the military corporation at the heart of the Army of Two games). The rookies are named quite simply Alpha and Bravo. Player One and Player Two.

EA will also try to tell you that — despite the generic names — these two characters have real personality and depth. Based on my hands-on time with Army of Two: The Devil's Cartel, that last boast is where the cracks in EA's pitch are starting to show.

I was able to check out a level early into the game where Alpha and Bravo get to team up with Salem and Rios, the leads of the previous two games. The Army of Two name doesn't seem to make much sense at this point, but what progresses from there is an enjoyable if completely standard third-person shooter.

Alpha and Bravo make their way through a villa shooting down hordes of generic Mexican gangsters. They duck behind cover, popping their heads out to take shots. Each kill causes a point reward to pop up, with bonus modifiers for headshots, environmental kills, and other bonuses — though it's unclear in the demo what, if anything, those points are used for.

If either of the players has their health drained to near-death, the other can rush over and revive them. At one point, the duo split up to take separate paths, meaning they need to survive on their own. The Devil's Cartel seems to have every beat you'd expect from the genre, every slight tweak on the arena full of bad guys to shoot that we've been seeing since Gears of War.

One thing the game does deserve some credit for is its focus on destructible cover. In my brief time playing, virtually everything that I could duck behind was able to be destroyed if it took enough shots from enemies. With wooden barrels busting into splinters and rusted trucks exploding, the tiny battlefields were constantly shifting, forcing my partner and me to keep moving. The Devil's Cartel also wisely lets Alpha and Bravo take an awful lot of damage, so being forced to switch to a new cover point in the middle of a heated battle was never too frustrating. 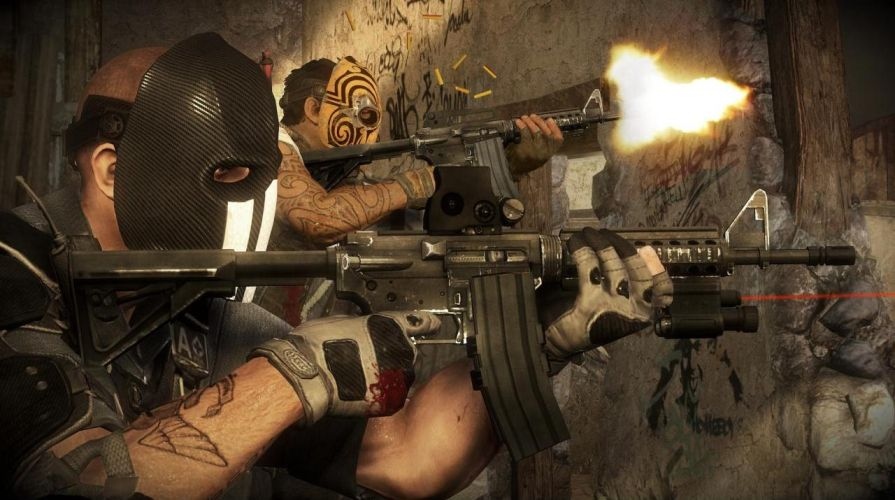 In addition to Alpha and Bravo, Army of Two: The Devil's Cartel will feature a second duo of new faces for the series: Big Boi and B.o.B. The two rappers are working on a theme song for The Devil's Cartel as well as voicing two operatives in the game. They will even be playable in a bonus mission available from pre-orders at participating GameStops in North America and select retailers in Europe.

The other big defining game mechanic in this demo of The Devil's Cartel is something that does a disservice to the supposedly less over-the-top tone EA claims to be going for: overkill mode. As you kill enemies, a bar that's annoyingly placed near the middle of the screen, fills up. When it's full, you can tap a button to enter overkill mode, letting you inflict absurd amounts of damage while being nearly invincible.

If you time activating overkill mode within moments of your co-op partner, you'll enter double-overkill mode, which is even crazier. Time slows down, enemy heads and bodies explode from a single bullet, and almost everything that you shoot is destroyed in an exaggerated explosion.

A producer on the game walked past my partner and I just as we engaged double-overkill. As we spent the next minute massacring enemies and blowing up everything, he watched and couldn't stop laughing. And I admit it: I laughed too. It's crazy and silly and pretty fun to suddenly be given that much power. But I definitely don't see how it fits in with EA's claim that they're trying for something more serious and relatable.

As we massacred enemies and blew up everything, he watched and couldn't stop laughing

That confusion extends to the characters and the dialogue as well. Visceral Games seems to be going for a straight man versus wisecracker dynamic with Alpha and Bravo, but in this mission the jokes stood out more. At one point, one of the big muscly guys — I couldn't tell them apart — threatens to give the other "bullet cancer" if he doesn't stop complaining about the lack of sunscreen. Later, in the middle of a huge firefight, one of them jokes, "Red barrels always explode. You don't play enough videogames, do you?"

The only moment of any seriousness came at the very end of this demo. Alpha and Bravo breach a room full of gangsters — complete with Call of Duty-style slow-motion shooting after the door busts open — but instead of finding the high-value target they're hunting down, they find a young girl. They get into a serious debate over whether or not to bring her with them, with one arguing that they need to protect this innocent and the other arguing that rescuing her will slow them down.

Whether or not these kinds of conflicts will be more frequent or gel into anything of actual weight is impossible to say, but I'm very skeptical. That said, the demo I played wasn't a terrible game. As bloody, third-person shooters go, Army of Two: The Devil's Cartel seems just fine. But EA might want to be careful with the claims they're making.