While developing launch title Nintendo Land, the company was also still deciding on concepts for the Wii U. According to Nintendo President Satoru Iwata, two-screen gameplay was still an early experiment. It started when a gyro sensor, a device that keeps track of angle and rotation speed, was inserted into a Nintendo 3DS. The 3DS was then attached to a Wii Zapper controller, which later became "the start of two-screen gameplay," said Katsuya Eguchi from the Software Development Department of the Entertainment Analysis & Development Division. 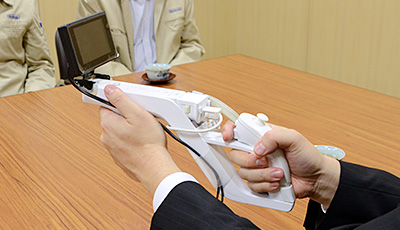 Shigeru Miyamoto was so impressed with the experiment that it left an impact on another Nintendo system: the 3DS.

Miyamoto recalled a number of 3DS systems packaged to ship and "headed out of the harbor," Iwata said, and all systems were outfitted with a gyro sensor.

The team continued to explore options with a handheld screen and created a prototype for today's GamePad — two Wii Remotes taped to either side of a monitor. About 30 of these prototypes were made. 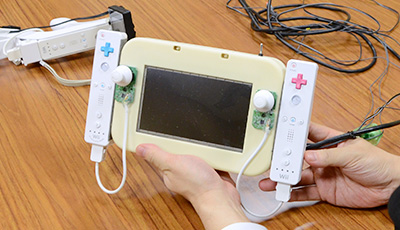 "Making this prototype led to Nintendo Land, so the development period for Nintendo Land was quite long," Iwata said.