The not-so-true story of OTON, a console that makes video games by itself

Share All sharing options for: The not-so-true story of OTON, a console that makes video games by itself

Derrick Samuels has a big idea: OTON, a game console that can create games by itself with little to no human input.

His $1 million, contradictory sales pitch: A console that provides a steady stream of autonomously created free games to players, doesn't cost a penny to develop for and delivers all revenue directly to game makers. A console that features Kinect-like voice and motion controls, and one that will create and support websites, music, movies and other non-gaming applications.

OTON is, according to its website and pitchman, a near-limitless creation. There's only one problem: None of it is exactly true.

Full games wouldn't be free; demos would. The platform has hidden fees for content creators and licensors. OTON isn't currently capable of creating entire games; just single levels. At this point, the proposed non-gaming applications are just that: proposals, not demonstrable uses of OTON. The unit itself doesn't yet exist except as a concept: Samuels doesn't have a hardware prototype, and the hardware specifications aren't set in stone.

According to Samuels, OTON's software — the Otonomous operating system, a customized version of the Ubuntu Linux distribution that he plans to make available for desktop computers — will work by piecing together game components on the fly from existing libraries of elements like sound and art. Samuels and his company, EnGeniux, decided to call the device "OTON" as a reference to its ability to build games autonomously. It will be compatible with Linux and Android games, although existing titles on both platforms will need to be ported to OTON.

While the ultimate goal is for a system that can create entire video games on its own, at this point the latest build of the technology can at best generate a single level of a game.

Once it is fully operational, Samuels said, OTON's game-making abilities will function in two modes: one in which it makes games by itself, which is "the first thing you see on the [user interface]," and another in which a user inputs certain guidelines to give OTON an idea of the desired type of experience, before the device builds the game.

"Making games with OTON is like making a cake," Samuels said, discussing the way the software uses the ingredients of existing elements such as AI and music and combines them with user-defined parameters to produce games.

"Making games with OTON is like making a cake"

EnGeniux plans to update the console with "OTON asset modules" about every six months to add new content to the unit's libraries of components like physics, artificial intelligence and art. According to Samuels, these continuous updates will allow OTON to create a wide variety of games across all genres. "Nothing will change [between modern games and OTON titles] but OTON having the ability to source and piece the game together," said Samuels.

OTON-created games will be of "almost the same professional ... quality" as most modern games, according to Samuels. The graphics will "definitely be on track to be on the level of [high-quality] mobile games," he said, and may eventually approach the visuals of the Wii U. According to the hardware specifications listed on the OTON website, the console features a quad-core ARM Cortex-A9 processor, which could be similar to the Nvidia Tegra 3 chip that powers the open-source Android-based Ouya console and tablets like the Google Nexus 7.

"Developers are vital to our success and [OTON's] success," he said, explaining that developers can both use the OTON software development kit to make their own games and create content to be uploaded into the asset modules.

From Evo to Ouya

Samuels' previous company, Envizions, developed the Evo Smart Console, a Linux-based gaming console that launched in late 2008 and failed to catch on. In May 2011, the company announced an Android-based successor, the $249 Evo 2, for playing Android games on televisions. The Evo 2 was in development at Envizions until the announcement of Ouya, the console that raised nearly $8.6 million on Kickstarter.

Ouya's phenomenal success was a bitter pill to swallow for the Envizions team. Its Evo 2 had been mocked by snarky bloggers and commenters for being a half-baked idea, while Ouya, with its sleek industrial design and endorsements from renowned developers — and, most notably, a $99 price tag — instantly became an industry darling. "It's frustrating to see everyone saying 'you guys copied Ouya' or 'you guys are fake,'" said Samuels.

"When Ouya hit the map," Samuels explained, "I felt that we had to shift our Android console to something more revolutionary, more innovative and more beneficial for gamers."

OTON, the idea for which had been floating in Samuels' mind since "around 2010," was that thing. He had been working on it on the side, but decided to bring it to the fore in an attempt to show the world something that had never been seen before. 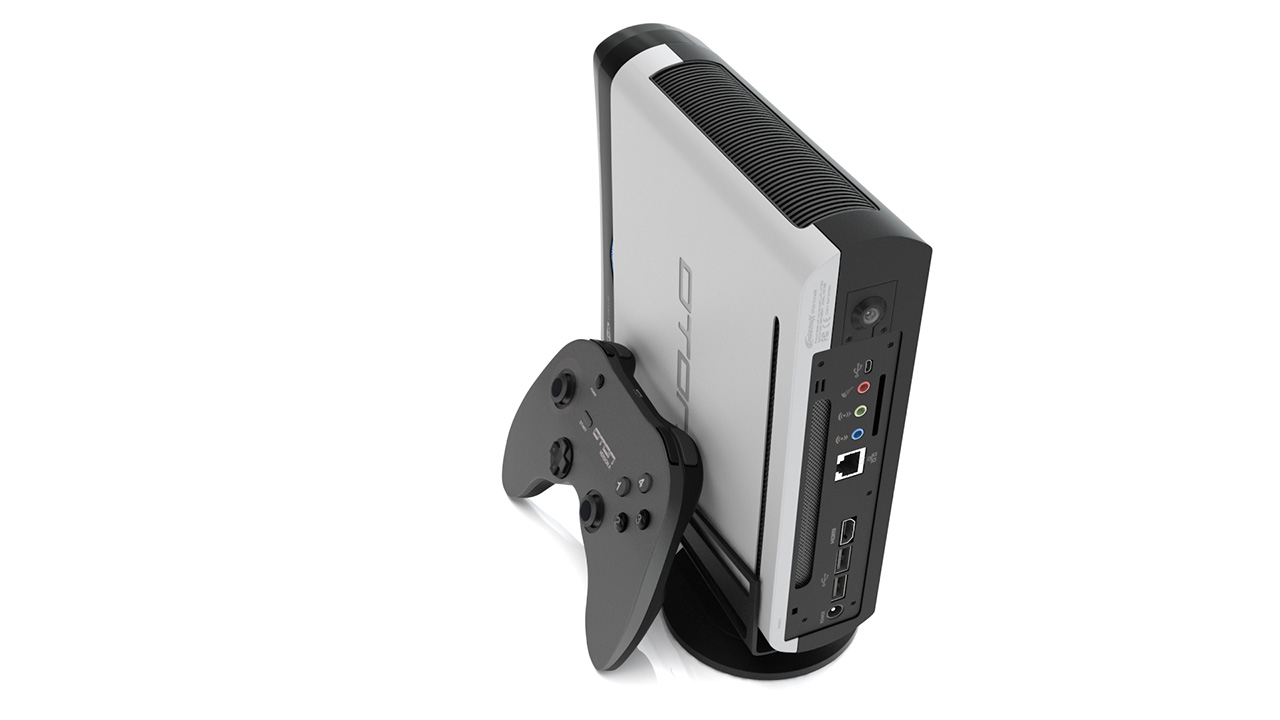 Last September, Kickstarter enacted a major policy change. The crowdfunding site no longer allows projects to present renderings or simulations for hardware; instead, creators must show their product in its existing state, and list their estimations of risks and challenges inherent in the project. That prevented EnGeniux from approaching the platform, since the company did not — and still does not — have an OTON hardware prototype in hand.

"We knew we were a few months from a working unit," said Samuels. So EnGeniux put up an OTON website with its own crowdfunding campaign, similar to Lockitron and Lumawake, products that Kickstarter had rejected as a result of its new guidelines.

EnGeniux was asking for $1 million. During a 35-day funding drive that began in early December and concluded last week, 10 backers pledged a total of $455.

Part of the problem might be the company's pitch, which does a poor job of providing much more than the promise of pie-in-the-sky technology.

The four-minute video accompanying the pitch (see below) does little to explain how OTON works, and it's unclear if the games it shows off exist on OTON. Images of the console on the site (including the one above) are mock-ups. The tone of the text brings to mind a late-night infomercial, presenting wild visions of the device's capabilities and features — "The Star Trek holodeck is finally here! (Sort of!)" — that could make some people skeptical of the device.

Put plainly, there's essentially no demonstrable proof on the website that OTON exists and can do what EnGeniux says it can. And the business model doesn't make sense, either: EnGeniux says on the site that all games are free, and that it won't take a cut of any revenue that developers bring in. Samuels clarified that OTON will automatically create free demos for games, and that developers can charge for the full games.

As for EnGeniux, the company doesn't seem to have any source of revenue beyond the price of the OTON hardware itself, which will come in $179, $279 and $479 models. But according to Samuels, EnGeniux would make money from developers uploading game assets, from the asset modules themselves and from "storage and license fees for other devices and services like TV or cable providers."

He added, "I hope to get hardcore game content as the platform [scales]. We control this [ecosystem] and this is just the tip of the iceberg."

While much of OTON's promise remains unrealized, Samuels insisted that it one day will be.

"There are [a] few things that we would do over if we had the chance," he said. "We really wanted to get OTON ready for the 2013 E3 show; however, our excitement of the project caused us to hasten the release of details about OTON."

"The Star Trek holodeck is finally here! (Sort of!)"

That rush to promote means that OTON is hampered by software that remains in its infancy — right now, EnGeniux has a working build running on Ubuntu 12.10, but it isn't up to creating full games yet.

"At this time the OTON demo code is only creating levels," said Samuels. "It [takes] about 10 to 15 seconds to create a standard 2D level. More development is needed for more extreme game and level creation."

According to Samuels, EnGeniux expects to have a working prototype ready this month, at which point he plans to "personally do a [20-minute] video presentation to clear up all the false stories about OTON." He noted, "We will have to scale [back] our approach from what we had planned for 2013," but said that once EnGeniux has a prototype in hand, the company can "revisit Kickstarter ... and prove [it has] the hardware and software in a limited function."

"I apologize if OTON came off like some type of [far-fetched] product but when you have to fight with limited resources against the big three [Microsoft, Sony and Nintendo] you have to innovate," he said. "I will correct where things went wrong and prove to people that OTON is very doable."