At CES, Valve founder Gabe Newell said that gaze tracking — tech that measures eye movement and position — will be "super important" in how players interact with video games in the future. Playing with the gaze-tracking Tobii Rex at CES this week, it's easy to see why Valve is pursuing that type of biometric feedback to complement new game experiences.

Tobii's focus at CES was more about Windows 8 interface control with the eyes than it was about gaming, but the Stockholm-based tech company did bring with it a handful of compelling game demos. In one, we played with StarCraft 2's interface using a combination of eye movement and keyboard input. Eye control was limited; we could zoom in on the mini-map, issue a move command to a single unit and recenter the screen with our eyes. Those actions were designed to complement normal controls, not replace critical functions.

Also available was a custom-built Minecraft demo — captured in the video above — that tracked the player's eyes to steer a character as it ran through a narrow obstacle course. Tobii also brought back its arcade game, Eye Asteroids, the demo it showed off at CES 2012.

Vincent Tallec, marketing manager at Tobii, told us that gaze-tracking gaming applications are better when designed to enhance established experiences. Tallec said that aiming a reticle with the eyes in a first-person shooter, for example, was not an ideal implementation. It offered too precise control, he said, turning shooter's into dull shooting galleries. Instead, Tallec said, gaze-tracking can be better used to add features like believable eye contact with non-player characters in role-playing games. 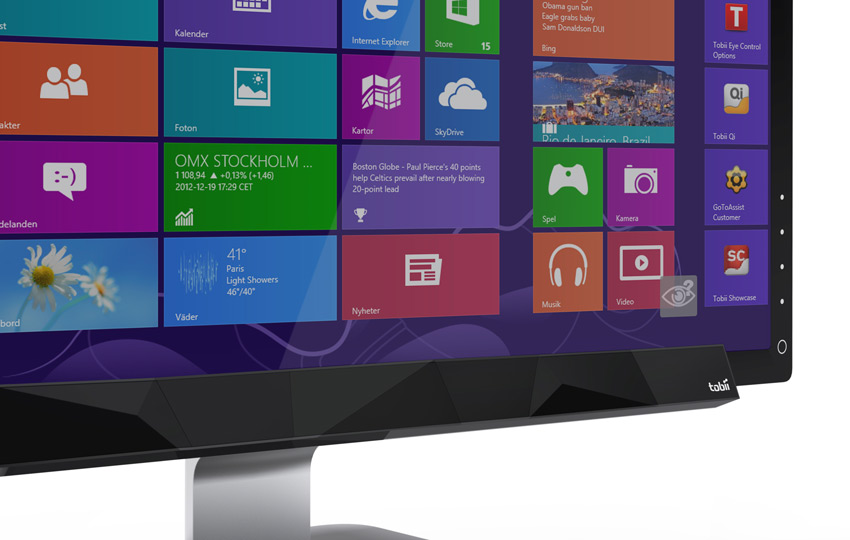 This fall, Tobii will release an "early adopter" consumer edition product of the Tobii Rex in limited quantities — just 5,000. Next year, however, Tobii says it plans to release a smaller, less expensive version of the Rex under another unnamed company's brand, hinting that shipments could be in the millions, not thousands.

Tobii says an unnamed game developer will be integrating its gaze tracking technology into its products, but would not confirm whether it's directly working with Valve, saying the company has many partnerships in the works.