It's easy to get caught up in Dante's struggle, but it's harder to actually like him

DmC: Devil May Cry is a case study in why many fans are wary of reboots. It takes a series known for being light-hearted and goofy — even in its most serious moments — and attempts to infuse it with a darker, grittier tone and something resembling social commentary.

Ninja Theory has demonstrated a talent for story and writing in the past but has struggled to execute on gameplay. Despite the studio's history, the slow, cynical story is DmC's weakest part. More surprisingly, the fast-paced, bombastic action surrounding the story is strong, sometimes even brilliant.

The combat is easy to pick up but still provides options for hours of experimentation and learning, while imaginative, constantly shifting level design toys with expectations around every corner. Ninja Theory has created a world that pulled me through it even when its characters and dialogue pushed me away. 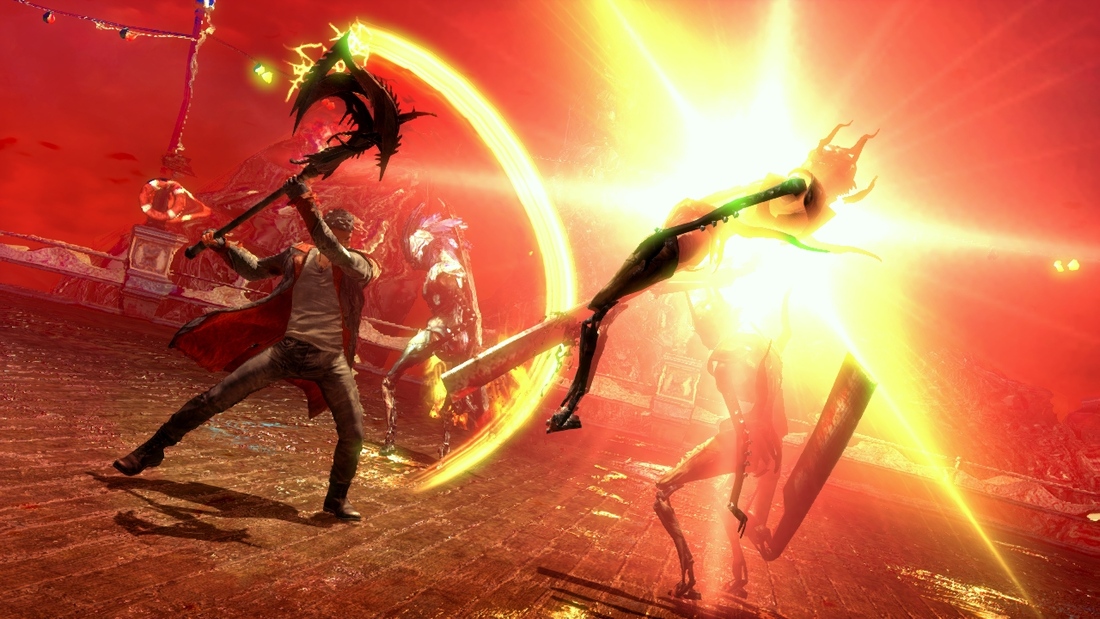 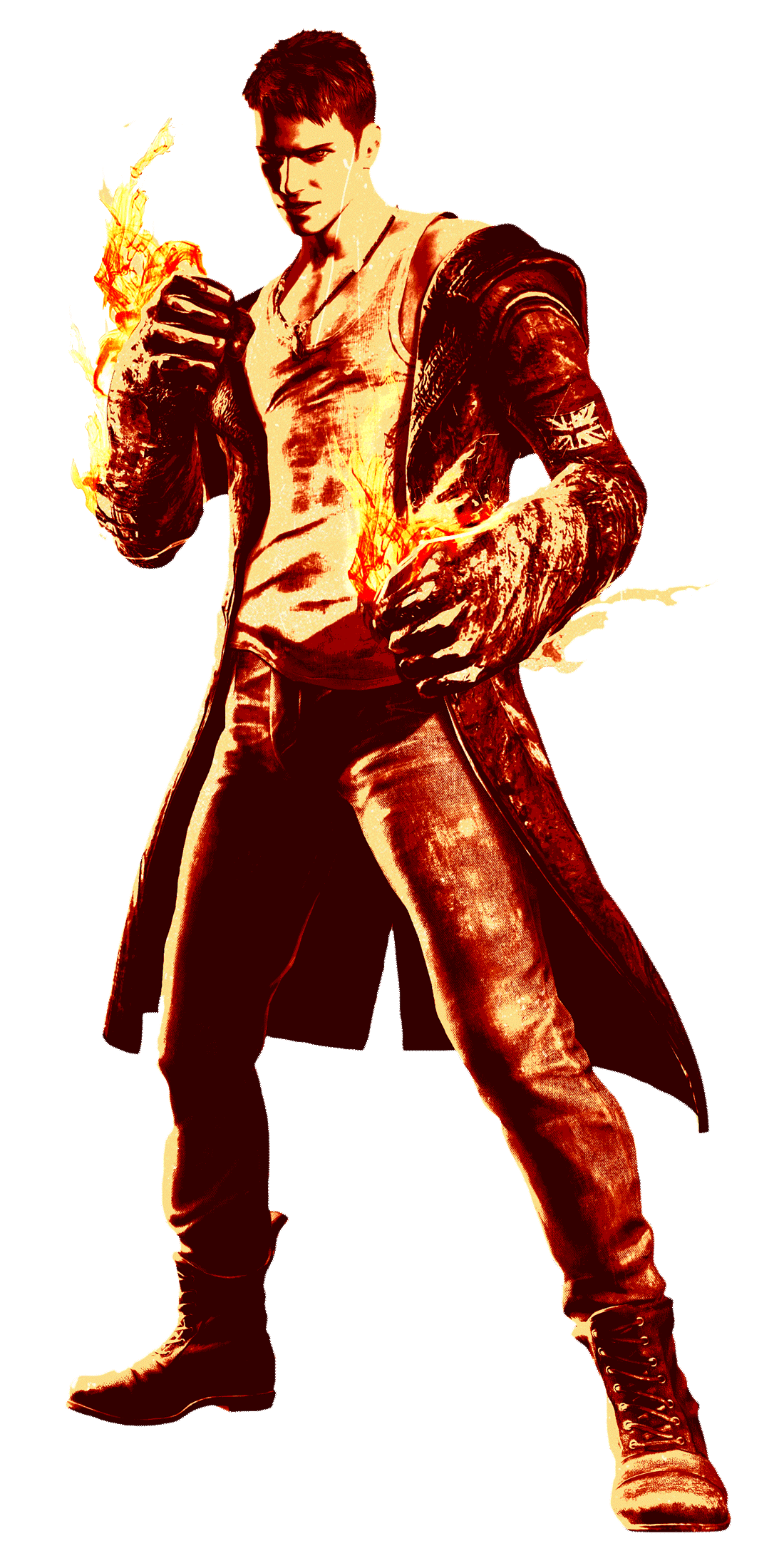 Series protagonist Dante has been reimagined as a younger, more troubled half-demon in DmC. His days of boozing and womanizing are brought to an end as he finds himself hunted by the evil army of Mundus, king of the demons. These forces drag Dante into the antagonistic alternate reality Limbo, where he meets a fringe group of hold-outs against Mundus and helps launch a revolution.

A more modern setting serves as the key differentiator from DmC's forebears. While levels mostly take place in Limbo, much of the story progresses in the real world, in a familiar city setting with satirical subplots inspired by our corporate, commercialized culture. For example, Dante discovers that the demons maintain control via two obvious methods: soft drinks and right-wing television news channels. 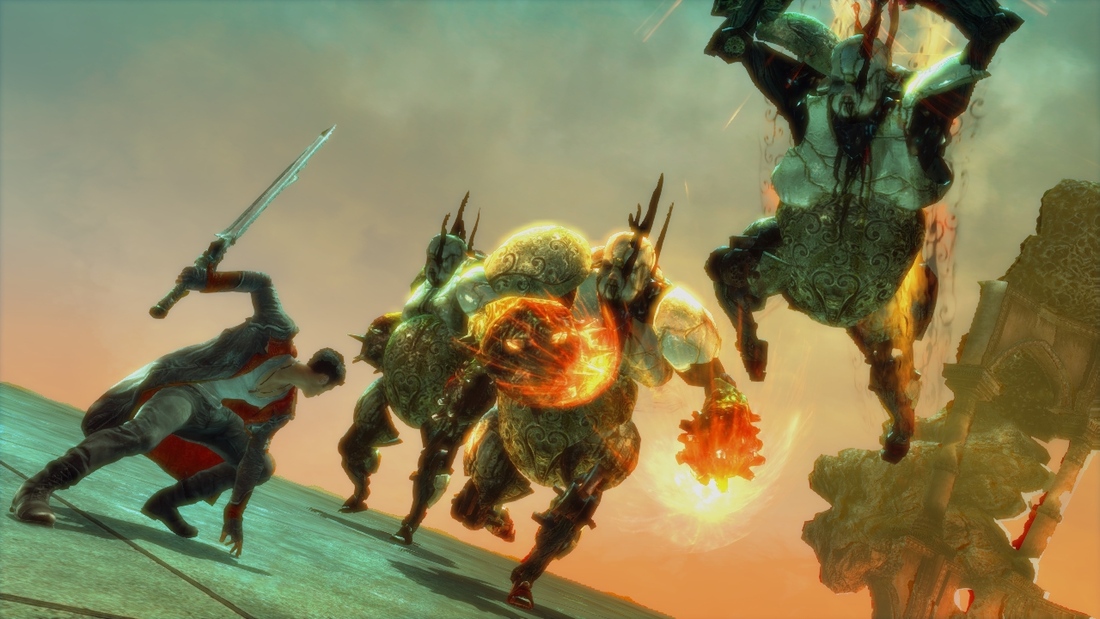 Aside from the initial chuckle, these bits of social commentary don't develop into anything meaningful or funny. Any gravity to the story disappears in a flood of foul-mouthed dialogue. The writing comes off as tongue-in-cheek sometimes and trying too hard to be edgy other times — as in the case of new female lead Kat, a punk girl who can open portals to Limbo by way of graffiti.

When it's not desperate to be counter-culture, DmC's story settles for being crass. Story scenes push the sex, blood, and swearing just a little too far. Dante jokes about having a bigger penis than one character, and his most common retort to bosses is a simple "Fuck you." The game attempts a small character arc, but it feels forced; the Dante at the end of the game isn't all that different from the Dante at the beginning. It's easy to get drawn into his struggle against demonic forces. It's a lot harder to actually like him.

It's easy to get caught up in Dante's struggle, but it's harder to actually like him

But you don't have to like Dante for DmC to play well. Ninja Theory has adopted the core of Devil May Cry's combat system, which mixes swordplay, guns and fast weapon-swapping for vicious combos. The lock-on from previous games has been replaced with a dodge button, and combo strings now rely on a new grappling hook maneuver that can pull enemies toward you or vice versa.

You can change which weapon you're using by holding down the left or right trigger to transform Dante into angel or devil mode. Throughout the game, you'll collect multiple weapons for each mode that can be swapped using the d-pad. By the end, you'll have a lot of weapon combinations to choose from and a lot of space to figure out whether your sword, scythe, axe or something else entirely works best against each enemy type. Devil May Cry traditionalists may feel ill at ease with the sped-up nature of DmC's fights, but there's a lot depth and challenge to be wrung from them.

It's difficult to fall back on mashing the same combo over and over in DmC. The game eventually introduces enemies who can only be harmed by angel or demon weapons specifically, but they're used sparingly, often mixed in with larger groups. These encounters force you to refine your tactics and try new things. Even without a manual targeting system, the game is good at figuring out which enemy you're trying to attack, and it gives you the tools to quickly close long distances and keep combo strings going.

In-between fights, you'll have time to explore each level, hunting for hidden bonuses such as keys that unlock stand-alone side missions. As you acquire new weapons and skills, you can go back to previously cleared levels to access areas you couldn't before, providing a reason to replay beyond grinding for upgrades.

Exploration segments are peppered with a handful of simple puzzles, but the main challenge comes from platforming. Dante can use two different grappling abilities — one in angel mode and one in devil mode — to swing on hooks or rip far-away platforms toward him. The game's hardest challenges force you to swap between angel and devil grapple points, double-jump and air dash all in one run. The jump physics are forgiving, and you respawn on a nearby platform with only a little health lost if you fall. But even if the platforming isn't too challenging, it looks and feels cool enough that I understood Dante's cockiness as I pulled off these insane acrobatics.

The difficulty in the details

If you're a long-time Devil May Cry player, there's something you need to know, something you probably suspected from videos or the recently-released demo: DmC is easier than the older Devil May Cry games. A lot easier. I was able to consistently get an S ranking or higher on missions, and I'm far from great at the game. But Ninja Theory has put in a lot of difficulty options to challenge even expert players. Here are your choices:

Core difficulties (Human, Devil Hunter, Nephilim): These are the DmC equivalent of easy, medium and hard, respectively. They're all that is unlocked from the beginning, but the game recommends choosing Nephilim (hard) difficulty if you have any previous experience with Devil May Cry. In addition to more powerful enemies, this difficulty adds more challenging sections to boss encounters.

Son of Sparda: This difficulty mode is unlocked after you beat the game on any other difficulty. In addition to stronger enemies, it "remixes" the make-up of enemy waves to provide a greater challenge.

Dante Must Die!: You'll need to beat the game on Son of Sparda mode to unlock the highest regular difficulty level, which offers up enemies in their strongest forms.

Heaven or Hell: This gimmick mode is also unlocked after completing the game on Son of Sparda difficulty. Here both enemies and Dante will die with a single hit, so playing smart is key.

Hell or Hell: If you consider yourself a true Devil May Cry expert, this is the ultimate challenge. Beat Heaven or Hell mode and you'll gain access to this difficulty setting, where Dante still dies from one hit but enemies have the regular amount of health. 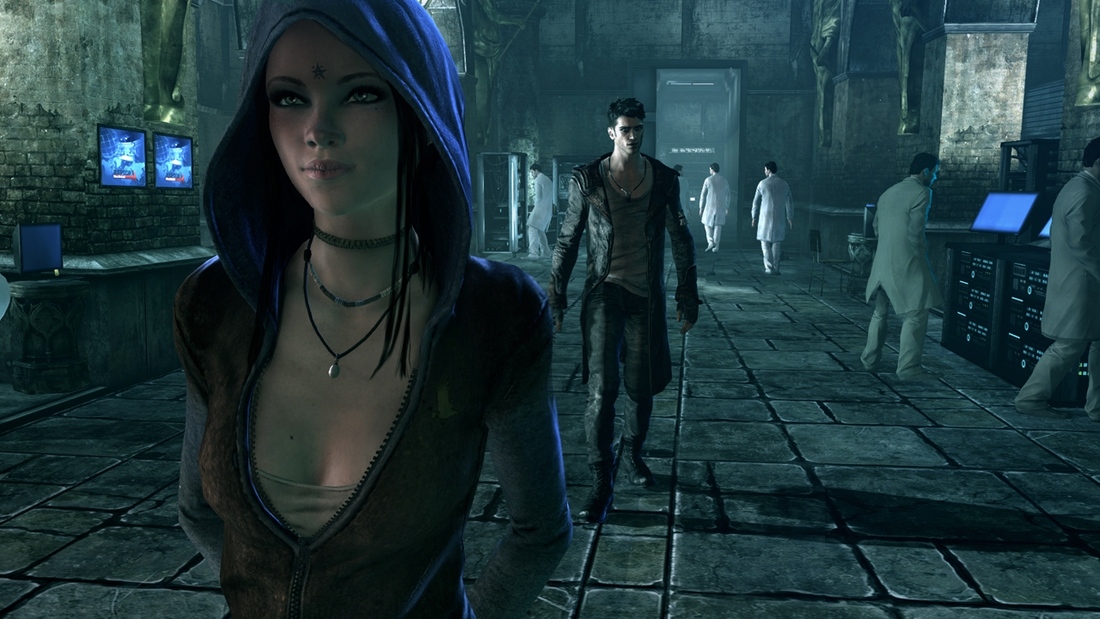 The long jumps and floating pieces of scenery are made possible by Limbo, a reality in which the world reshapes itself in an effort to kill the hero. As walls close in around you and environmental props spring to life, Limbo provides a very real sense that the levels themselves want you dead. It's impressive from the beginning — a creepy boardwalk carnival level — but Ninja Theory is able to maintain the appeal of this malevolent living world by constantly introducing crazy locales that mess with your perspective in new ways. There are a couple of boring levels — a factory and an office building are the primary culprits — but almost every other mission is full of visual surprises to marvel at (if they don't kill you first).

Limbo is more of a star in DmC than anything else. For as good as the combat feels, it doesn't do anything shocking or new. But watching the levels dynamically warp and shift as I ran through them is unlike any experience I've had in an action game before. It's not a genre-changing revelation, but it's something I want to see in future Ninja Theory games.

DmC's tone falters, but the action never does

The setting of Limbo is Ninja Theory's only major innovation for the Devil May Cry franchise, but it's enough to make this reboot worth it. The game's tone falls apart as it fluctuates between deadpan and dopey, but the action never falters. Fights are fast, intense and fun, and they're aided by a world where nothing is what it seems and nothing stays the same for long. I just wish Ninja Theory had matched the mesmerizing level design with a character who I actually want to spend time around.