Android 'consoles' and Steam Boxes dominate gaming at CES, while consoles sit it out

Share All sharing options for: Android 'consoles' and Steam Boxes dominate gaming at CES, while consoles sit it out

The Consumer Electronics Show isn't a major showpiece for video game innovation. Despite the usual presence of gaming and consumer electronics heavyweights like Sony and Microsoft — though the latter did announce the original Xbox at the show in 2001 — CES has never been much of a draw for the gaming audience. Many predicted that this year would be even less interesting than usual ... so why wasn't it?

Without Microsoft delivering the annual keynote and filling the front of the Las Vegas Convention Center's Central Hall with its massive booth, the message seemed to be clear: CES is shrinking and its largest presence at the show can't even be bothered to show up anymore. If you thought that with Microsoft missing, Sony might divert some of its spotlight away from headsets and wireless speakers towards its PlayStation products you weren't alone. At the show, Sony CEO Kaz Hirai described PlayStation Vita sales as being "on the low end" of the company's expectations, making its relative absence all the more unusual.

But while traditional console gaming didn't make the trek to CES this year, both mobile gaming and PC gaming had plenty of news to share. While Android-based (and Kickstarter-backed) projects like Ouya and GameStick weren't in Vegas this year, there was another breed of Android gaming devices vying for attention. Both Moga and Green Throttle Gaming were present sharing their similar vision, in which your existing Android-powered phone or tablet doubles as a game console with the simple addition of a controller. 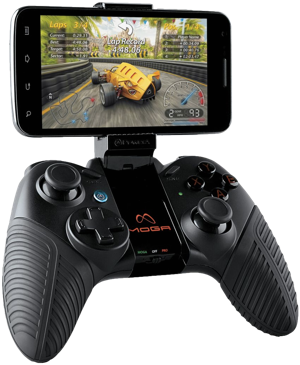 The MOGA Pro is an alternative to last year's regular MOGA controller; this version forgoes the portability of its predecessor in favor of something far more familiar to console gamers. The controller connects to the console wirelessly and uses either the HID standard or MOGA's preferred proprietary standard, which requires special developer support. While MOGA isn't ready to announce a price, the previous controller's $50 asking price seems a likely bet, considering the competition.

Green Throttle Gaming made headlines thanks in large part to the involvement of co-founder Charles Huang, better known as the co-founder of Red Octane, the company behind the Guitar Hero series and now a (dormant) part of publisher Activision. Huang and his two co-founders, both veterans of the mobile industry, envision a future where regular iteration in mobile hardware leads to phones and tablets with more than enough processing power to replace your game console. Using its Atlas controller, available in a developer kit variation for $45 directly from the company or from Amazon, Green Throttle wants to create controller-specific games both in-house and by working within the existing mobile game ecosystem.

One of the biggest surprises of CES was undoubtedly Nvidia's Project Shield, a portable game console powered by the chip giant's just-announced Tegra 4 chipset. A familiar gamepad coupled with a 5-inch, 720p multitouch display, Nvidia's Android-powered handheld doesn't cut corners. Nvidia will be manufacturing and selling the device itself, something of a departure for a company used to creating underlying technology and working with outside companies — everything from game console to graphics card to mobile handset manufacturers. When asked about this strategy, Nvidia product manager James Wang explained that Nvidia had an ideal Tegra-powered gaming platform in mind that its partners never built leading the company to consider building it itself.

If that strategy sounds familiar, you may be thinking of Valve's long-rumored Steam Box, which Valve co-founder Gabe Newell confirmed is in development at CES. And while Valve is making its own box, meant to address the shortcoming that Valve perceives in the PC gaming space, it's also working with other hardware manufacturers to create an entire ecosystem of living room-friendly gaming PCs. One of those is Xi3, manufacturer of a line of modular PCs, small enough to fit comfortably next to your television or even bracketed to the back of it. The company announced an investment from Valve at the show for its in-development device, the Piston.

Gaming PC company Razer was back at CES showing off the Razer Edge, first unveiled at last year's show as "Project Fiona." The x86-powered gaming tablet is now divorced from the dual-analog gaming controller which is available as an attachment to the device. Also available is the HDMI-equipped "console dock" which, when combined with the Razer Edge, a game controller and Steam's Big Picture mode, turns your Edge into a Steam Box. At $999 without any of the aforementioned attachments, it certainly won't be the most affordable option for everyone. 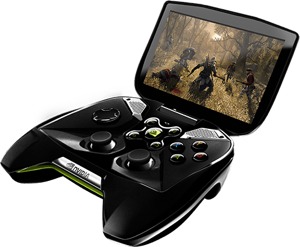 Another unusual method of accessing Steam games on your television is Nvidia's Project Shield. Sure, the Android-powered handheld can't run your Steam library itself but it can stream gameplay from your home gaming PC — whether it's in your living room or not — so long as that PC is powered by an Nvidia GeForce GTX graphics card. Once streamed to your Shield, you can output the video to your television through an HDMI port on the back of the controller.

Of course, no discussion on the future of gaming would be appropriate without mentioning Apple, whose iOS-powered Apple TV "hobby" continues to be dangerously close to upending the mobile gaming space. Before his death last year, Steve Jobs told his biographer that he'd "finally cracked" the challenge of building a better TV, but it's unclear what exactly Apple is working on. Will Apple update its Apple TV line with an App Store, setting off a rush of games to the television? If so, how will those games be controlled? Could Apple create or authorize a wireless controller — the very definition of the "complex remotes" he decried in that same quote — or will its solution for a better TV not consider games at all?