Disney Infinity hands-on: toying with a magic kingdom of our own

Share All sharing options for: Disney Infinity hands-on: toying with a magic kingdom of our own

The magic of Disney's movies and theme parks will collide in the company's bold new video game venture, Disney Infinity, a toy-infused world that lets players "imagineer" a theme park of their own — one populated with characters, attractions and games of their own design.

Officially announced this Tuesday, Disney Infinity will integrate collectible, physical toys into a sandbox game starring Disney and Pixar's most recognizable brands. Like Activision's Skylanders series, players import characters and other game content by placing toys on a sensor base, making them magically appear in a virtual world. Infinity is billed as a platform designed to grow with new game content and new toys.

Immediately after Disney Interactive's unveiling of Disney Infinity at a press event in Hollywood, we got to take the toy-powered video game for a spin, spending much of our hands-on time in the game's creative Toy Box mode. Toy Box is where players can mash-up Disney and Pixar's universes, where Jack Sparrow and Lightning McQueen can come together.

The mode is also where players can build their own games — Disney reps showed a recreated Mario Kart level crafted by the game's developers during their presentation.

We played Toy Box as a group of four, toying around in the open-world sandbox as game developers built out race tracks and filled a soccer stadium with wacky contraptions. In one ad-hoc game of King of the Hill, players tried to knock each other off the top of iconic Epcot attraction Spaceship Earth. In another, we raced through an obstacle course, some of us riding toy horses while others drove cars or piloted jetpacks.

Disney had a selection of playable characters on hand: Mr. Incredible, Dash, Elastigirl and Violet from The Incredibles; Sully and Mike from upcoming Pixar prequel Monsters University; and Capt. Jack Sparrow and Barbossa from Pirates of the Caribbean.

Each character comes with his or her own unique set of powers. Dash, for example, can sprint at blurring speeds and execute a lightning fast combo attack. Elastigirl can whip an elongated arm at objects and characters to pull herself closer to them. Mr. Incredible can perform earth-shattering ground pound attacks.

Characters can swap out their access to specific powers to use some of the game's toys and equipment. Anyone can equip Buzz Lightyear's winged backpack, for example, or wield common items like a gun that changes the size of players and objects. An inventory wheel in the bottom right corner of the screen shows what players have access to in Toy Box mode, from the world-editing Magic Wand to Carl Fredricksen's cane from Up to a gun that rapid fires rolls of toilet paper.

Disney Infinity developer Avalanche Software says that access to those items, which extend to vehicles like a hoverboard from Lilo & Stitch, will come from experience earned in the game's Play Sets, the Disney and Pixar-themed worlds packed with quests and challenges. Unlocking those new items via a slot machine-style device adds a layer of progression to Disney Infinity. As players rank up by collecting stars, they'll get access to items, vehicles and texture sets used to customize their levels. 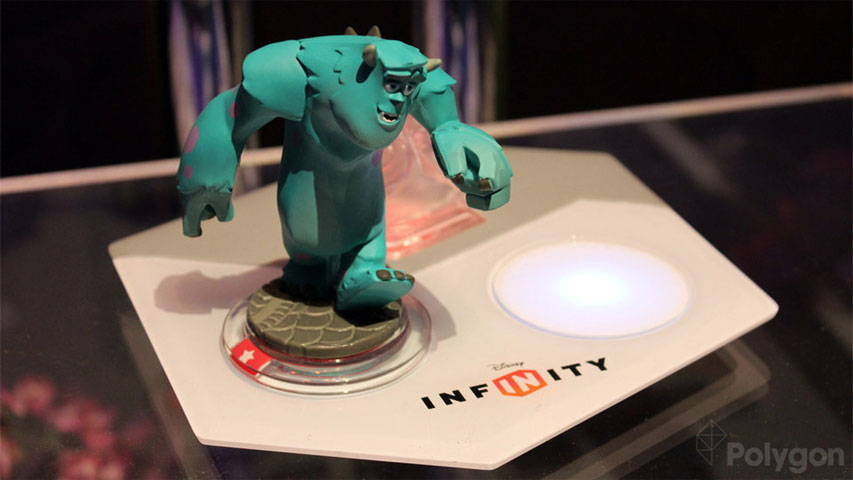 Some items and all of the game's playable characters can only be unlocked through Disney Infinity's line of physical toys and Power Discs. Integrated with RFID chips, hexagonal Power Discs will add new vehicles like Cinderella's carriage or a flying Dumbo. Players can stack Infinity's action figures on top of circular Power Discs to enhance a character's abilities. A Jack Sparrow Power Disc, for example, multiplies the amount of in-game money players make. A Bolt Power Disc makes players' attacks stronger.

Players can stack up to two Power Discs underneath their action figure when placed on the game's USB-connected sensor base.

Disney says it plans to sell Power Discs in blind packages; like baseball cards or collector vinyl toys, players never know exactly what they're going to get when they buy a pair of discs.

That randomness is sure to cause headaches for parents hunting down a specific toy or Power Disc for their kids and target the pleasure center of toy collector's brains. It's also an interesting tactic that may help spur creativity in Disney Infinity players who will approach new items and customization features with new curiosity.

The creative component of Disney Infinity appears to be its greatest strength, even if players already have many options to craft custom games of their own in titles like LittleBigPlanet and Minecraft. Disney Infinity's approach, a familiar place where players can create and share — or simply cause good natured chaos — feels like the refined, heavily corporate evolution of those ideas. Even in its pre-release state, the magic of Disney Infinity is apparent. This is a game where young and old can enjoy all-new play experiences with the characters they love.

That is, if they have the right toys.

Disney Infinity will be available starting this June on Xbox 360, PlayStation 3, PC, Wii, Wii U and Nintendo 3DS, with mobile and online platforms to follow.