Share All sharing options for: Bioshock Infinite will fix the faults of its predecessor's system of choice

In Bioshock, players were regularly faced with the decision to harvest or save Little Sisters — a decision that offered the player rewards in-game in the shape of Adam which could be used to buy abilities. According to Holmes, by incorporating the choice mechanic into the game as a way of acquiring items, players became numb to the philosophical consequences. In order to maintain the sense of significance behind player choices this time around, it will no longer be used as a strict gameplay mechanic, he said.

'You're not thinking about it on a philosophical or moral level at that time because it just becomes ‘I want the more special juice to make me do the thing.''

"Looking back at Bioshock 1's choice system, it's something that's really powerful the first time, not really powerful the second time and by the 10th time you're not really trying to decide whether to harvest or save the little sisters," said Holmes. "You're not thinking about it on a philosophical or moral level at that time because it just becomes ‘I want the more special juice to make me do the thing.' It numbs people over time."

In a recent demo of the game, Polygon was shown how this system has evolved. Upon entering the city, protagonist Booker DeWitt wins a raffle, giving him the opportunity to throw a baseball at an interracial couple. The focus on ethics and morality becomes part of the narrative more than a function of the gameplay or a way of regularly gaining items.

Unlike the Plasmids of Bioshock, Infinite introduces Vigor — abilities that are bought using Silver Eagles, the game's currency, and ingested by Booker. Vigor is powered by Salts, a resource that is found in-game and can be carried by Booker's companion Elizabeth who will throw you health packs, ammo and salts when you are running low, and will similarly warn Booker if there is a threat nearby. According to Irrational Games producer Mike Syrnyk, while she doesn't literally pick these resources up along the way, a system is built into the game governing how often she is able to throw the player these necessary items. The result is a system that doesn't require Little Sisters to help the player gain their powers.

"I think the goal this time around was to not ever let that happen, which is not to say that people won't become numb to actions in the game — because maybe this is a problem with games in general, that we haven't quite figured out how to crack. But I think we never wanted there to be a feeling of ‘oh this is the part where we have to choose the thing so I can get the good stuff.'

While Bioshock instilled aspects of a Randian morality system into its gameplay, this time Holmes wants players to "think about the world they're in and not necessarily make a singular choice." In comparison to the original game, "the choice mechanic is not something that becomes commonplace in [Bioshock Infinite]," says Holmes. "There are certain moments when you'll see it, but it's no longer really a strict gameplay mechanic that's going to crop up over and over again."

The narrative parallels of Columbia and Rapture

But despite the transformation of the well-known choice mechanic, Bioshock Infinite is layered with reminders of the series it is spiritual successor to from the moment you step foot onto Columbia, the floating city of Infinite.

As shown throughout the demo, some of these are classically BioShock (and classically SystemShock too, if we go further back into Irrational's history.) Hidden throughout the game are audio files — called Voxophones — which offer background information about Columbia and its founders, as spoken by the creator of Columbia Zachary Comstock, his wife and others. Elsewhere there are Kinetoscopes, basically the video equivalent of Voxophones. Kinetoscopes can be found throughout Columbia and, when peered into, plays silent propaganda films that offer a deeper look at the making of the city. Telescopes, too, are scattered around, which show important landmarks in the area.

However, there are thematic parallels as well. And according to Holmes, the parallels between the first Bioshock and its successor — which hint at a deeper connection between both games that has yet to be fully detailed — are entirely intentional.

"You can certainly see at the start of the game, the narrative parallels with the lighthouse and travelling to Columbia," he says. The entrance of the city is full of visual reminders. You enter by way of a church lit only by candles, and slosh through ankle-deep water that has filled the building. It's hard not to be reminded of the introduction of the original Bioshock, where — surrounded by the fire and wreckage of a crash — you swam to safety. 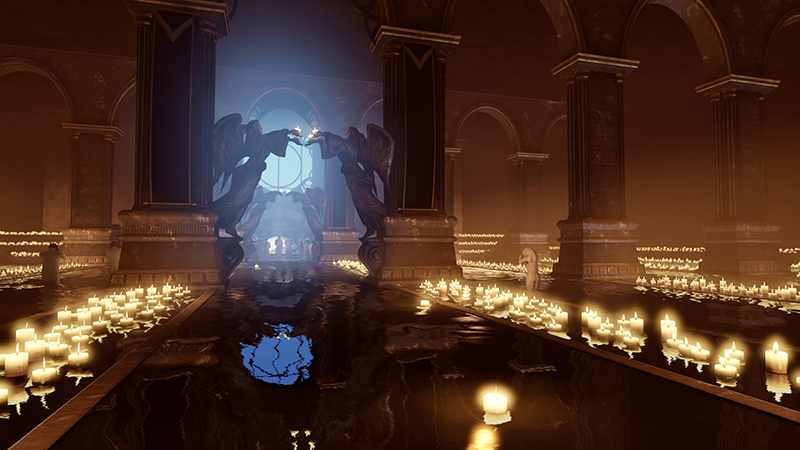 Holmes sees further parallels between the ideologues behind both Columbia and Bioshock's Rapture.

"Comstock [the creator of Columbia] being this sort of ideologue, making this city that is something that is quite not what it appears to be on the surface is very similar to Ryan and Rapture. I think you see parallels in terms of this aspect of one person's ideology that runs off course than was intended at the start. There's always this glitzy utopia where when you pull open the curtain you see the rotten underbelly of the city. Those thematic elements give a sense that both are, that there are many parallels in terms of why they were built. It's a utopia built for people to escape but ultimately that leads to many more problems than would have existed than had they learned to adapt to society.

'There's nothing that we do on accident.'

"So those parallels are all there and they're all there on purpose. There's nothing that we do on accident." He says, adding: "The parallels that appear between Bioshock 1 and Bioshock Infinite are meant to be that way."

Despite tackling issues such as racism and American exceptionalism, the nature of the business requires Bioshock Infinite to cater to a broader, mainstream audience who might not have a solid understanding of these topics. According to Holmes, "no one has to, at the end of the day, fully understand the ideas we are trying to get across.

"I think there is a level of the story that is there for player enjoyment, and then you start to layer on the broader themes. At the end of the day, while we want as many people to be able to play as possible we are not going to talk down to the audience."

Lost, Inception and the search for the target audience

However, as a writer Holmes says he has no incentive to write down to the audience because of this.

"You never want to write down at all," he says. "If you look at something like J.J. Abrams stuff like Lost or a Christopher Nolan movie. Who exactly was the target audience for Inception? On the surface both of those concepts seem like they have a very niche audience, but they were able to attract a huge following. I think it's about identifying, ultimately, a very simple story. In Inception it's just about this guy who is trying to return home to his kids after a horrible incident with his wife. It's about finding something you have and you think is worth saying and demanding the audience's attention.

"I think games too often don't expect enough of the people that are playing them and go for the lowest common denominator. And I don't think that is what we have to do narratively to be successful."

Bioshock Infinite launches on PC, Xbox 360 and PlayStation 3 on March 26.